KUALA LUMPUR: Police have arrested seven men over the last week for their alleged involvement in robbing 7-Eleven outlets around the Klang Valley.

With the arrests, police believe they are able to solve at least 17 robberies at the convenience store's outlets since the start of the year.

Police scored their biggest success when they arrested a 23-year-old jobless man during a robbery in Jalan Ambung Kiri, Kepong last Sunday.

Armed only with an ice pick, the suspect was believed to have committed 11 robberies single-handedly.

A day later, police arrested three others, aged between 19 and 21, and seized a samurai sword during a robbery at another 7-Eleven outlet in Jalan Kuching.

Initial police investigations revealed that the suspects were involved in at least five robberies in the Klang Valley.

The three, aged between 21 and 23, were detained hours after they robbed an outlet in Taman Jinjang Baru and were planning on a second robbery at another convenience store in Jalan Ambong Kiri, Kepong.

The suspects, who were seated in a van in front of the store, however changed their minds when they saw a police patrol car and sped off. They were arrested after a short chase.

Police seized six mobile phones, two parangs and several cigarette cartons from the suspects, all of whom were jobless. 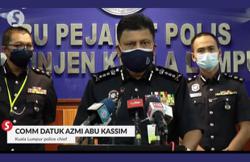