PETALING JAYA: The bank account set up by the Malaysian Association of Tour and Travel Agents (Matta) in 1987 for the Asean Tourism Forum (ATF) was fully disclosed to auditors and no funds were misappropriated, Matta president Tunku Iskandar Tunku Abdullah said.

Tunku Iskandar said the Hong Kong and Shanghai bank account was set up at the request of the then Tourism Development Corporation (now Tourism Malaysia) to receive registration fees for the 1987 ATF.

He said the Matta executive council had mandated the setting up of the account together with TDC as a co-signatory and it was fully declared to Matta’s auditors.

“The reason the account was not disclosed in our accounts to Matta members was because the money did not belong to us but to TDC,” Tunku Iskandar said yesterday after the launch of the Matta Conference 2003.

Tunku Iskandar was responding to press reports which said that his predecessor Ahmad Kamil Abdullah had on Wednesday lodged a police report against him for not disclosing the setting up of the ATF account in 1987.

Tourism Malaysia director-general Datuk Abdullah Jonid said the ATF 1987 account was disclosed in the TDC accounts, adding that the auditors were fully aware of the account’s existence.

“There was no misappropriation of funds. Anyone can check TDC’s audit report,” he said.

Ahmad Kamil and his tour agency, Tina Travel and Agencies Sdn Bhd, have been suspended from Matta activities for 10 years since May following allegations that he misappropriated at least RM1.6mil from organising the 1997 ATF while he was president.

Ahmad Kamil, who became president in 1993, was removed by a vote of no confidence during an extraordinary general meeting in 1998.

A police report was lodged against him in 1999 alleging that he misappropriated the funds. Police investigations are still pending.

Tunku Iskandar said Ahmad Kamil could appeal the exco’s decision against him at any general meeting of members, noting, however, that the latter had not lodged any appeal for today’s annual general assembly. 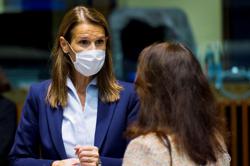