He said the hospital, to be completed next year, would be equipped with the most modern and advanced facilities to handle infectious diseases.

Experts in the field would also be based at the hospital, Chua said after opening the World Health Organisation’s (WHO) Global Conference on Severe Acute Respiratory Syndrome (SARS) yesterday.

“Worry for the future, feelings of guilt, remorse and loneliness will set in at the recovery stage.

“Denial, suspicion, anxiety and depression may happen to those under isolation. Some may even be suicidal,” Prof Huang said.

Medical staff would normally neglect protection and be heroic initially before fatigue, vagueness and sleep disorder set in, she said, adding that a study showed 12.3% of them had anxiety symptoms before going to a SARS hospital.

Recommending mental health care for medical staff, patients and family members and placing psychiatrists at SARS hospitals were among the steps that China had taken, she said.

WHO director-general Dr Gro Harlem Brundtland said the severity of the outbreak had raised the level of public perception and awareness on infectious diseases.

She cautioned that SARS would not be the last disease faced by international communities as a new disease was emerging once every year.

She added that it was important to continue stepping up surveillance and strengthen defence mechanisms against infectious diseases, including being vigilant of new and emerging diseases.

Dr Hume Field, principal veterinary epidemiologist at the Animal Research Institute in Brisbane, Australia, said the disease pattern showed that domesticated lifestock like pigs and chickens were not harbouring the virus.

“Studies in China had shown that the coronavirus was present in civet cats and racoon.

“Research in Canada showed that when the coronavirus was introduced into pigs and chickens, they did not develop any diseases and none of the virus could be isolated later,” he said. 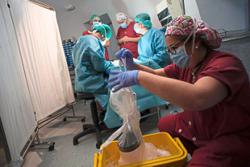