HIT BY FLOODS (June 11): Hundreds of thousands of people were caught in chaos caused by flash floods that saw one person drowned in what has been described as the worst deluge to hit KL city for the past year. Hundreds of cars were damaged when underground car parks were turned into giant pools and police reported that several people were also injured in various accidents due to the floods. The three-hour rain that brought much relief from the heat started at 4pm and within 30 minutes became a downpour trapping the hundreds of thousands of people as they tried to make their way home from work.

SMART TUNNELS (June 12): The government is building “smart” tunnels that can quickly channel water away from flood-prone areas in Kuala Lumpur as part of efforts to reduce flash floods. The project has started with the construction of such tunnels near the RMAF airbase in Sungai Besi, said Prime Minister Datuk Seri Dr Mahathir Mohamad. Minister in the Prime Minister's Department Datuk Tengku Andan Tengku Mansor said the construction of the tunnels was to minimise the volume of water runoffs into the Klang River during heavy rain.

DON’T SELL OUT (June 13): The younger generation must protect their heritage and not surrender anything that belongs to the country, Datuk Seri Dr Mahathir Mohamed said. The younger generation must learn lessons from the history of the country's struggle to gain independence in order to be able to defend their heritage, he said. He also lamented that not much was written about the country's history, citing an example of how he had urged several historians to ask about Tunku Abdul Rahman's experience when the Father of Independence was still alive but no concrete efforts were made.

NATIONAL SERVICE (June 14): The National Service Programme will be implemented next year for 100,000 youths who were born in 1986, with the first batch starting their stint in February. Defence Minister Datuk Seri Najib Abdul Razak, who announced this, said the group - which will include boys and girls from all races and states - would be selected randomly by computer out of 480,000 people who will turn 18 next year.

SECOND WAVE (June 9): Police have declared their two-week nationwide crackdown on pirated and pornographic video compact discs (VCDs), which ended last Sunday, a success and are now launching the second phase of operations against unhealthy activities. . The next targets are private clubs, associations and those who operate gaming and slot machines. Police operations have been extended for another three months until Sept 9.

NEW SPEED LIMIT (June 9): The speed limit of 120kph will be introduced next month for several stretches of the North-South Expressway, Elite, Kesas and some toll expressways, Works Minister Datuk Seri S. Samy Vellu said. The new speed limit - increased from110kph - will not cover Federal and Sprint highways and the Lebuhraya Damansara-Puchong, he said.

SUICIDE DATABASE NEEDED (June 11): Befrienders, a non-governmental organisation offering emotional support to the distressed and suicidal, has called on the Government to create a central database to track suicides and attempted suicides. Currently, Befrienders can only glean trends of suicidal behaviour from anecdotes from the media, medical professionals, a small-scale studies and their experience, said Befrienders Kuala Lumpur chairman Zifalila Rahman.

SPECIALIST HOSPITAL (June 9): The Health Ministry will build a national specialist hospital for women and children near the Kuala Lumpur Hospital, said Health Minister Datuk Chua Jui Meng. The hospital, which would be ready in 2007, would have 850 beds and 14 operating theatres, he said.

PRE-SCHOOL DEGREES (June 9): Universiti Tunku Abdul Rahman (Utar) should offer a Bachelors degree in pre-school teaching to allow those with an advanced diploma in that field to further their education locally. Utar chairman Datuk Seri Dr Ling Liong Sik said the university should build up the programme since the country had diploma holders such as those from the Centre of Early Childhood Education Institute.

STUDENT VOICE (June 10): Student representatives will be allowed to sit in as well as take part in government discussions on matters related to social ills. Deputy Prime Minister Datuk Seri Abdullah Ahmad Badawi said this would allow the students to voice their opinions on issues, especially those pertaining to the younger generation.

SUPER VARSITY PROPOSAL (June 12): The National Economic Action Council (NEAC) has proposed the creation of a super university that will be assured of the biggest grants from the Government. NEAC executive director Datuk Mustapha Mohamed said the resources and status of the proposed university would attract researchers from around the world and would be able to conduct research that would benefit industries and vice-versa.

ONLY 100 LICENCES (June 12): Only 100 private institutions of higher learning are expected to get licences to recruit foreign students once the re-registration exercise is finalised this month. Deputy Director-General of Education (private education) Datuk Hassan Hashim said at present about 70 licences had been issued to private colleges and universities while more than 30 had been issued to private schools.

SINGLE WEB GATEWAY (June 10): The Government has embarked on developing a web portal which will provide a single gateway to government agency services, Chief Secretary to the Government Tan Sri Samsuddin Osman said. He said the initiative was part of the Government's efforts to provide efficient services to the public.

INFORMATION HUB (June 10): The International Committee of the Red Cross (IRC) has made Kuala Lumpur its regional hub for the dissemination of information on international humanitarian law, its communications officer in Malaysia said. Yazlina Mohd Yazid said the decision to make Kuala Lumpur the hub was made early this year at the ICRC's headquarters in Geneva. ,

SEX DISEASE SURGE (June 12): Britain is tottering on the brink of a sexual health crisis, doctors warned, as the parliamentary committee reported an alarming surge in sexually transmitted disease. Ignorance of the dangers of unprotected sex is the most alarming among young Britons, especially men, said the Health Select Committee in its report on the government's National Sexual Health and HIV Strategy for England.

BAN ON VISITS (June 9): Indonesian authorities are to close the conflict-hit province of Aceh to foreigners following the shooting of two German tourists last week, a report said.

The gangs controlling Bangkok's motorbike taxis, the fastest and probably most dangerous way to get around the crowded city, have been declared public enemy number one by campaigning premier Thaksin Shinawatra.

STILL THE ONE (June 9): Despite having wanted to wring his neck after learning of his affair with Monica Lewinsky, former US first lady Hillary Rodham Clinton admits that she still loves Bill Clinton and believes that he is the most interesting man she has ever met, according to excerpts from her memoirs.

SUU KYI' S WELL (June 11): Detained opposition leader Aung San Suu Kyi is in good spirits and top military leaders have given assurances she will be freed as soon as possible, United Nations envoy Tan Sri Razali Ismail said. International concern has intensified over the health and whereabouts of the Nobel peace prize winner since violence erupted on May 30 as she was touring a provincial town in the north.

OLDEST ANCESTORS (June 13): Scientists believe they have found our oldest immediate ancestors, a finding that sheds fresh light on Homo sapiens' rise out of Africa and their conquest of the globe. The skulls of two adults and a child, found in the Middle Awash area of central Ethiopia in 1997, have been carbon-dated to between 154,000 and 160,000 years old, around 50,000 years earlier than the previous oldest finds of Homo sapiens. 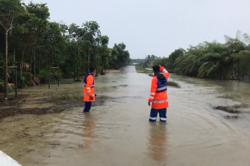