After the last flop, Pansha now banks on romantic comedy

Next week, cameras will start rolling at its first location shooting in Cameron Highlands.

Pansha, of Berjaya Film productions, said at least RM1.5mil had been set aside for producing Bisikan Remaja and it should be ready for screening by December.

He said one of the colonial convent buildings in the hill resort would be turned into a private college for the film after which the production and film crew would head for Malacca for the rest of the shooting scene, which would take one month.

Pansha, whose real name is Panchacharam, said that six years ago, he lost some RM500,000 in the movie Lenjan and until today still could not figure out why it did not make the box office mark despite having top-rated actors like Rosyam Nor and Eman Manan and winning awards at the 1999 Asia Pacific Film Festival.

“The impact of the loss was so profound that I couldn’t even think of doing a new movie then.

“Perhaps, the market wasn’t ready for a heavy suspense thriller like Lenjan. It was also the recession time and a lull period for the local film industry.

“After spending RM1.2mil, we only managed to recoup RM700,000,” said Pansha, who later decided to concentrate on producing Tamil and Malay dramas to recover the losses.

Bisikan Remaja will mark Pansha’s 15th movie to date and it will also be one of the few romantic comedies that he has produced.

“I am more confident with this movie. Not only is the subject matter interesting, the line-up is also promising,” said Pansha, who is also the treasurer of the Film Producers Association.

Zulkifli Osman and Din Glamour will jointly direct the film while the main cast will include Nisdawati and Hasnul Rahmat, both of whom won the Best Newcomer awards in KL Menjerit at the recent Malaysian Film Festival.

Taking the main lead would be a fresh-faced newcomer Z. Zaidi who was recently nominated as Remaja magazine's Young Man of the Year.

Others in the cast are Linda Hashim, Nasrizal Ngasri, A.R. Badul, Baharuddin Hj Omar, Rosnah Johari and M. Rajoli while the guest actors will include Rosyam Nor, Aziz M. Osman and Pansha himself as the volleyball coach.

Five new songs will be featured in the film, all of which will be rendered by Z. Zaidi who incidentally will be coming up with a solo album soon.

“People are bound to say there is a hint of Hindi in the film especially with five songs thrown in.

“Bisikan Remaja would definitely be a commercial Malaysian film that is bound to attract many to the cinemas,” said Pansha, who also produced the award-winning movies Suami, Isteri Dan ... and Isteri, Perempuan Dan ?.

While Lenjan is about a serial-rapist killer, the controversial Perempuan, Isteri Dan? that won eight awards at the Malaysian Film Festival is about a wife who enticed other men to have affairs with her and resorted to unnatural means to tame her abusive husband.

“Suami, Isteri Dan?is about a stonehearted wife who couldn’t come to terms with her love for her ex-husband.

“It will be sometime before I can really do another serious film. I prefer to stick to romance and comedy films, it’s the safest bet for now,” said the 52-year-old director. 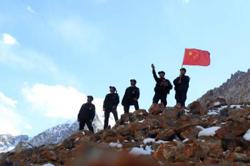