KUANTAN: Residents of the Bukit Ubi Old Folks Home in Jalan Bukit Ubi here had a surprise visit from members of the Kuantan Rotary Club on Sunday.

The members, led by their president Dr K. Kunaraj, presented goodies and ang pows to 16 of the inmates, most of whom were in their 70s, in conjunction with the coming Chinese New Year celebration.

According to the club’s community project director Eric Wong Wing Tat, the Kuantan Rotary Club would hold a free medical day for the public in Gambang on March 3.

He added that the event would be jointly organised with a mineral water company.

“We have members who are doctors. They will be providing their services on that day,” he said.

Wong said it would be held in the town at 9am.

He expected about 300 people to turn up for the event. 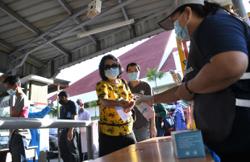 Sabah Polls LiveBlog: Voter turnout was 58% as at 3pm