SINGAPORE: The body of a naval crew member was recovered yesterday and hopes were fading for three others after a Singapore warship was crushed in a collision with a container ship in Singapore’s worst-ever naval accident.

The dead woman crew member was among four trapped in a flooded sleeping compartment when the RSS Courageous, an anti-submarine vessel, collided with the Dutch-registered ANL Indonesia in the busy Singapore Strait near midnight on Friday.

“In terms of the possible loss of life, this is the largest loss of life from a single accident that the RSN (Republic of Singapore Navy) has encountered so far,” he said after inspecting the mass of twisted metal at the aft of the ship.

Asked about the three other missing female crew members, Tan added: “We have to prepare for the worst.”

The rear of the 55-metre RSS Courageous was shorn off and its sleeping quarters and engine room were both crushed. Eight of the 44 crew suffered minor injuries and were treated in hospital, the Ministry of Defence said.

None of its 23 crew was injured, local media reported.

The body of the crew member was found by rescue divers after the six-year-old warship was towed to nearby Changi naval base and lifted out of the water.

“Divers found one body lodged between the bunks,” Tan said.

“We need to take time to ascertain the location of the other three servicewomen.”

The four crew - weapons and communications specialists - were sleeping when the collision occured at 11.35pm the ministry said.

The collision occured near Pulau Batu Putih, located on the eas-

tern entrance of the Singapore Strait about 15km off peninsular 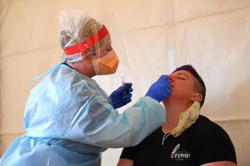 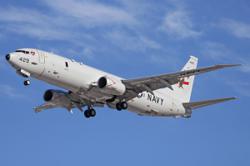 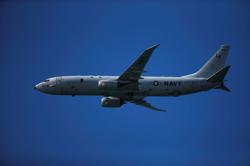