First woman: Pelosi, surrounded by children, wielding the gavel for the first time after being elected Speaker of the House on Jan 4, 2007. — Photos: TNS

THE Nancy Pelosi era is over, her recent decision to step down as US House Speaker being the coda to the story of arguably the most effective – and most polarising – American political figure of the 21st century.

Pelosi, the first woman, the first Californian and the first Italian-American to become Speaker in the United States, said she never thought she would go from “homemaker to House Speaker”.

She told House colleagues she would not seek another term as House Democratic leader in the Congress that convenes in January, a position she’s held for 20 years. She was Speaker for eight of those years, serving under four US presidents.

“With great confidence in our caucus, I will not seek reelection to Democratic leadership in the next Congress. For me the hour has come for a new generation to lead the Democratic caucus that I so deeply respect,” she told the House in a sweeping, emotional 14-minute address on Nov 17.

Pelosi exited by reaching back to recall not only the history of the Capitol but also her own personal journey.

She recalled how she stood on the House floor years ago when her father took the oath as a Congress-man. Being a member herself “binds me as a colleague to my father, a proud New Deal Congress-man and one of the earliest Italian-Americans to serve in the Con-gress,” Pelosi said.

And now, “I stand before you as Speaker of the House, as a wife, mother, a grandmother, a devout Catholic, a proud Democrat, a patriotic American, a citizen of the greatest republic in the history of the world”.

At the same time, he said, “She’s allowed herself to become this emblem of a Bay Area liberal out of touch with the heartland”.

The San Francisco Democrat came to the House in 1987 already well-known to insiders. Her father and brother had been mayors of Baltimore. After moving to San Francisco when she married Paul Pelosi, she served as California Democratic chairman and became a big party fundraiser.

Her fundraising and political prowess helped her climb to the House leadership, the first woman to crack that glass ceiling when she became House minority whip in 2002. In 2003, Pelosi became the party’s House Democratic leader and in 2007, she became speaker.

On her last day, she cited a long list of initiatives she helped pass. As the 2007-09 recession – the deepest at the time in the United States since the Great Depression (1929-1939) –sent unemployment soaring, she worked with Republican president George W. Bush on a relief package. When that wasn’t enough, she quickly pushed the House to pass a massive recovery package about a month after Barack Obama became president in 2009. No Republicans voted for the plan. A year later, Pelosi kept her party’s liberal and more centrist wings together and won passage of the Affordable Care Act, also known as Obamacare.

“The healthcare Bill would not have gotten through” without Pelosi’s legislative skills, said Christian Grose, academic director of the University of Southern California’s Schwarzenegger Institute.

The sweeping measure, the most significant overhaul of America’s healthcare system in 50 years, infuriated Republicans. Pelosi became a favourite target in the 2010 Congressional elections, and Republicans won back control of the chamber.

Democrats were the House minority from 2011 to 2019, meaning they had virtually no say in shaping policy. When they did regain control in 2019, Pelosi took an unusually aggressive tone in opposing then president Donald Trump.

“I have real problems with this president because he doesn’t tell the truth, he doesn’t honour the Constitution and he’s harming children,” she told Variety magazine in March 2020. She tore up his State of the Union address in 2020 as he finished. She gave her OK to two impeachments of the former president.

Unemployment benefits received a big boost during the Covid-19 pandemic. Families with children received big tax breaks. Consumers will get financial help when they buy energy-saving appliances. Prescription drug costs for Medicare recipients are being cut. A trillion dollars’ worth of infrastructure projects are underway across the country.

Pelosi was able to keep the House Democratic caucus together over the last two years despite all sorts of pressures. Democrats had only a 220-212 majority. 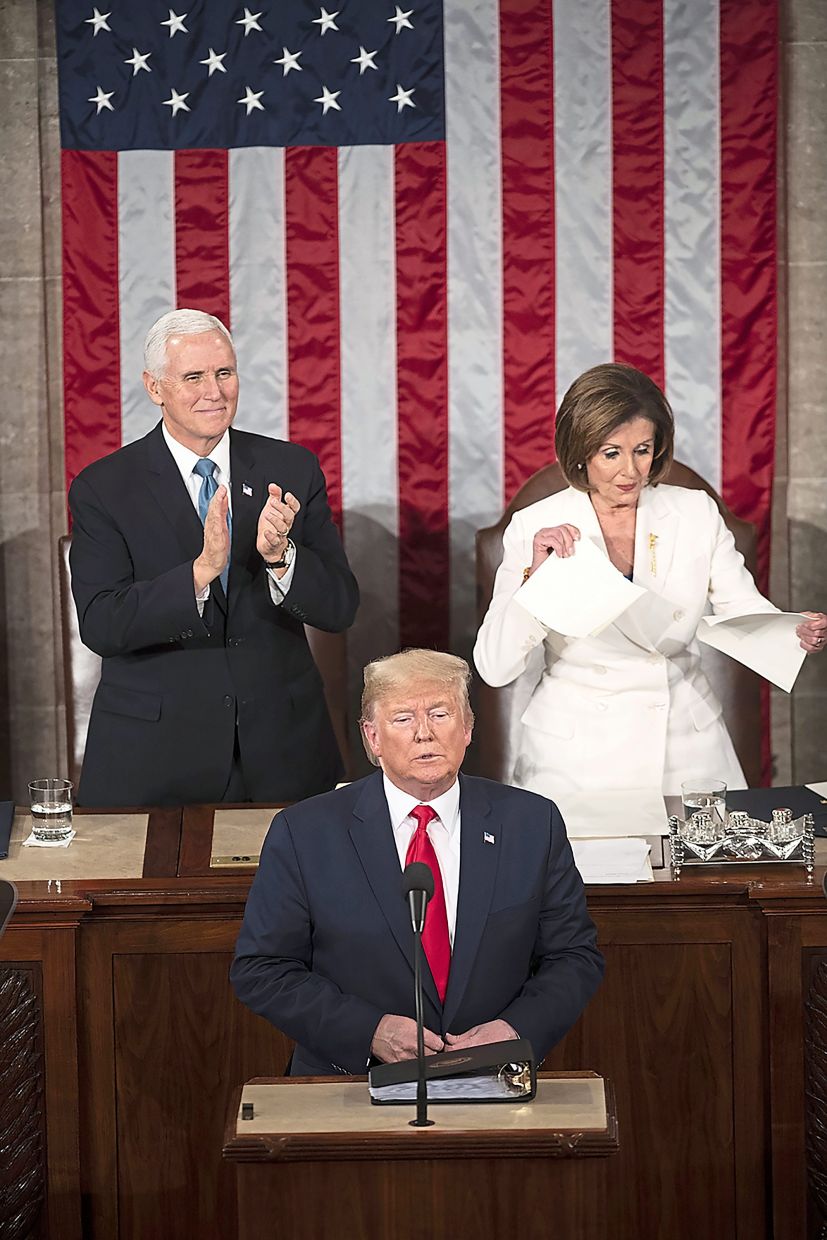 The world-famous image of Pelosi (right, back) tearing up a copy of Trump’s speech seconds after he finished his State of the Union address in 2020.

Since Republicans rarely, if ever, went along with the big Democratic packages, Pelosi could barely afford to lose a single vote. Biden, despite his legislative skills as a former senator, was of limited help as his approval ratings were stuck in the low 40s.

All her successes, though, made her a target. “Pelosi was in their face all the time,” said Tobe Berkovitz, emeritus associate professor of advertising at Boston University.

Ads blasting Pelosi were all over social media and the airwaves. Assemblyman Kevin Kiley, vying for a Congressional seat in California’s 3rd District, ran two ads painting a wan, grim Pelosi as responsible for higher gas prices and other ills.

But personally, he said, “she is so liberal, it’s easy to make her a national liability for Democrats.”

Pelosi and the future

Pelosi had always been coy about whether she’d continue as Democratic leader. For months, she refused to speculate.

But after her husband was attacked by hammer-wielding suspect David DePape on Oct 28, she went home, and in mid-November told CNN her decision “will be affected (by) what happened the last week or two”.

Pelosi comes from a political background where combatants battled hard and sometimes ugly, but rarely let things become personal. Her father and brother were able to build coalitions of Baltimore’s patchwork of ethnic and racial groups. When Pelosi came to Congress, it was still a place where the ability to compromise was respected, not ridiculed, and where most people knew not to cross a line and get personal in public.

Pelosi is a fighter, but some tinge of regret for the lost, more civil past flickers on amid hints it could have been part of her decision to step down. She left as Republicans took control of the House, though only by a thin margin. Remember, Pelosi said, that legislating is more than scoring partisan points, it’s about making the American system work.

“In this room our colleagues across history have abolished slavery, granted women the right to vote, established Social Security and Medicare, offered a hand to the weak, care to the sick, education to the young and hope to the many,” she said.

“Babies born today will live into the next century and our decisions will determine their future for generations to come,” Pelosi said.