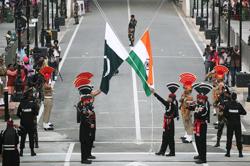 As enemy agents go, Indian MP Rahul Gandhi has made the grade more frequently than many others, says the writer. – AFP

UKRAINE has published a list of some 620 academics, journalists, military veterans and politicians who it says are Russian propagandists. Three such worthies in the list are Indian, and they seem baffled by the accusation.

As “agents” go, there’s probably nobody to beat Pakistan, followed by India in sheer turnover. Someone praising an Indian batsman in Pakistan could fall into the category of an Indian agent as is known to have happened with cricket enthusiasts in India cheering for a Pakistani bowler. An Indian or Pakistani critical of authoritarian rule in their countries could be portrayed as enemy agents.