The shadow of the deep state in South Asia 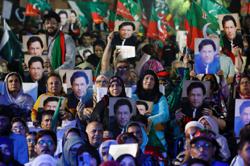 A supporter of Imran Khan rallying in Islamabad with thousands others on May 26 in an attempt to bring down the government and force early elections. – AFP

IT’S a creepy fact of our lives that we are governed by the deep state, both the domestic and the foreign variety; that are in cahoots with each other when they are not working at cross purposes.

The horrors being inflicted on Ukrainian people or the political tremors felt in Pakistan and Sri Lanka; the wars in Africa, or the grief in Palestine – the hand that guides the cataclysmic events is impervious to the pain it scatters en route, in some ways not unlike Omar Khayyam’s moving finger with its pronounced lack of empathy for the quarry’s tears.

The debate in Pakistan over Imran Khan’s claim of being ousted from power at the behest of the United States got me sifting through readily accessible records of subterfuge that major powers do to destabilise our lives sans mercy. This is not to affirm or deny the veracity of Imran’s claim, only to stress that regardless of what he may say, South Asia has been as prone to rival power machinations as any country or region ever was.

When a trusted ally could spy on Angela Merkel or Emmanuel Macron, what won’t a well-equipped foe do to tap someone’s phones or pry into their computers? South Asia, sadly, doesn’t yet seem awake to its vulnerabilities.

Be that as it may, we can’t have different yardsticks for the goose and the gander. On the one hand, we readily acknowledge how a major power dragged Gen Musharraf kicking and screaming into a spurious war on terror, and we are also ready to see a foreign hand in the judicial murder of Z.A. Bhutto. What makes anyone certain that Imran is crying wolf, that he is doing so because of his inability to accept his humiliating eviction from power?

Everyone has a fish to fry or a bone to pick in the murky world of international relations. It’s not often that we get Julian Assange or Edward Snowden to blow the whistle on the backstage of facile cordiality. On the other side of the fence, there has been a surfeit of Vasiliv Mitrokhins to give us mind-boggling insights into the inhospitable reality of intractable mistrust. It was Mitrokhin, the former high-level KGB spy, after all, who shared with us the secret of how Soviet leaders planned to instigate India to go to war with Pakistan in 1980. The conflict would be a smokescreen for events transpiring in Afghanistan.

I turned to Kunwar Natwar Singh’s memoirs – One Life Is Not Enough – to glean something one has guessed about spooks and their Big Power masters in foreign countries, but without credible evidence to support the hunch. Natwar Singh let the cat out, as analysts in Pakistan might want to see, about how the Americans tried (but failed) to stall his becoming India’s foreign minister.

Natwar was informed that communist leader Harkishan Singh Surjeet had spoken to Manmohan Singh and Sonia Gandhi to put him in the ministry of external affairs.

“Surjeet was worried that the American lobby would work against my getting MEA. I had, over the years, acquired a reputation of being anti-American. I was opposed to several aspects of American foreign policy. The Manmohan Singh government was sworn in on May 22. I took my oath as external affairs minister,” he wrote.

That evening Natwar met the new PM who he said had fought hard to get him the job.

“Till the last moment, the American lobby had allegedly tried to derail my appointment. Manmohan was apprehensive and mentioned how powerful the Americans were and that perhaps they could go to any extent to destabilise certain countries, including India. I appreciated Manmohan cautioning me but reminded him that our foreign policy was made in New Delhi, not in Washington D.C.”

The kind of stuff cuts close to the bone in Pakistan too, doesn’t it?

It was Rajiv Gandhi’s death anniversary on May 21.Thirty-one years after his assassination his death remains shrouded in opacity and unexplained coincidences. Rajiv was killed at a late night whistle-stop election meeting in Tamil Nadu in 1991. President Kennedy’s death spawned endless narratives and relentless questions that have shown up as movies and TV serials. Much of the mystery around Rajiv Gandhi’s death though was created by the Indian parliament itself, where key questions often remained unanswered.

Something else happened with the probe into his death, which might be difficult to imagine elsewhere. The Jain commission of inquiry set up to probe the conspiracy into the assassination was persistently slammed by sections of the media. It named foreign agencies, but that was promptly slammed. When the home minister himself pointed to the possibility of a foreign hand, he too was taken to task by major mainstream newspapers, not very different from how it plays out in other countries in India’s neighbourhood.

It sounds like a political statement with a populist slant. But this is what then home minister S.B. Chavan, a close friend of prime minister Narasimha Rao, told parliament.

“I sincerely feel that it is not only the LTTE but there are other forces also, which in fact are very deeply involved. It is not easy to point out which exactly is the agency.”

An MP quoted the Indian Express editorial on this discussion. ‘Utterly irresponsible’ said the headline, as it slammed India’s home minister: “Mr. S.B. Chavan’s theory about certain forces in superpower countries conspiring to kill Rajiv Gandhi is so utterly preposterous at this stage of the investigation that one must wonder about the home minister’s capacity for logical thinking.”

Now which side is the deep state on, one wonders. – Dawn/Asia News Network 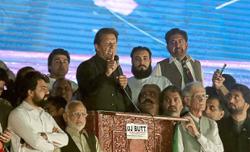