Hot slums: Rather than the weather, it is cities’ poor design and inequitable conditions that cause unbearable conditions. — Filepic

FOR millennia, people have looked at climatic differences to explain cultural variations around the world. The Greek philosopher Hippocrates, for instance, suggested in his influential Airs, Waters, Places that equatorial civilisations were inferior, citing the tropical climate as detrimental to creativity and conducive to laziness. Many centuries later, Filipino nationalist and polymath Jose Rizal would confront these ideas, also citing the heat as a factor for laziness but laying the blame squarely on an exploitative colonial system that did not incentivise productivity.

Indeed, as humans have settled in almost every part of the planet, climate differences have led to the development of technologies to control the temperature, even as a significant part of global energy consumption goes to cooling or heating, which in turn have led to global warming and climate change.

How cold is cold enough? And how hot is hot enough? This is where, once again, our cultural thermostats come in, influencing not just our personal lives but our built environment. In Norway, for instance, the value for thermal comfort is expressed in the term koslighet (cosiness), leading Norwegians to maintain a certain warmth throughout their houses even in rooms not being used, leading to higher energy consumption. In the Philippines, the same is achieved in the attempt to cool buildings and houses to a level desired by the people.

Interestingly, in Mexico, most houses and buildings – including my apartment – do not have central airconditioning or heating systems. Instead, people just adjust to the climate by adding or subtracting clothing layers; they simply have a broader range of tolerance when it comes to temperatures. On the other hand, in the United States, temperature control is so much a part of everyday life that people complain when their narrow range of indoor comfort is disrupted.

Independent of controlling ambient temperature, it is worth noting that we have used technologies for temperate control in some other way, including refrigeration, which did not exist just two centuries ago, facilitating the rise of industrial agriculture and the growth of our cities. Today, whether you’re in Manila or Mexico City, you can eat chutoro from Japan or yoghurt from Greece thanks to these technologies.

Taken together, all of these technologies have led us to an unsustainable trajectory, ushering in a vicious cycle in which climate change is increasing the demand for heating and cooling, which in turn is leading to further climate change. Which is why, all over the world, scientists and policymakers alike are trying to come up with steps to avert this cycle, such as developing new technologies that will make heat storage easier, rediscovering old ones that actually make sense for their climates (eg, the bahay kubo or stilted house), and designing structures that make cooling less energy-intensive.

Unfortunately, there are many cultural and economic barriers to these technologies. Our cities, with their high cost and limited space, simply do not permit the kind of architecture that would require less energy to heat or cool. A bahay kubo surrounded by trees would feel quite comfortable but many Filipinos would prefer a house made of cement, while others have no choice but to live far from such a commodious setting.

Perhaps the Covid-19 pandemic, which has underscored the importance of ventilation, can lead to paradigm shifts in the way we design our houses, buildings and cities. For instance, the fact that trees and green spaces can make a big difference in ambient temperature should further underscore the need for them. And the fact that overcrowding – especially in poor urban communities – has led to suffocating heat should reanimate questions about how we can uphold people’s “right to the city”.

While we blame “the weather” or the “season” for unbearable heat, oftenimes it is actually our cities’ poor design and inequitable conditions, and our disregard for the environment, that have led to unbearable conditions, which can only worsen in the future if we fail to do something about them now.

Indeed, if we are to avoid a reset of our cultural thermostat, we need to rethink our physical and social environments so we can maintain them for the years and decades to come. – Philippine Daily Inquirer/Asia News Network

Filipino researcher Gideon Lasco is currently based in Mexico City to study Mexico’s popular and political responses to Covid-19. 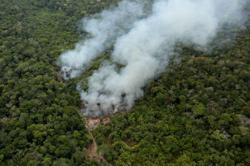