Azhari believes that education supplements the work that we do and is supportive of those who wish to continue their studies even later in life. — LOW LAY PHON/The Star

It’s never too late to learn new things and widen your horizon in life, says retired First Admiral Azhari Abdul Aziz of the Royal Malaysian Navy, who has had an illustrious career in both the military and in the humanitarian field through his decades of service.

AFTER serving the armed forces for over 37 years and spending a further five years in humanitarian work, retired First Admiral Azhari Abdul Aziz has a lot to look back on, and a lot to look forward to.

Brimming with energy and good humour when met at the International Committee of the Red Cross (ICRC) headquarters in Kuala Lumpur on his last day of work before his retirement recently, it is no surprise to find that Azhari is already thinking about his next venture – though not before he takes a much-deserved rest.

“When my two months’ leave is over I’ll probably look at the offers that I’ve been getting, ” says Azhari, who is currently also an adjunct professor at the National Defence University of Malaysia (NDUM). In the meantime, Azhari’s been spending his short “holiday” helping out at a friend’s fruit orchard.

Azhari left the navy as Assistant Chief of Staff (Administration) with the rank of First Admiral in 2016. Shortly after, he joined the ICRC as its armed and security forces coordinator where Azhari engaged with armed forces on military training exercises and doctrinal development of international humanitarian law.

Born in Rawang, Selangor, and raised in Bagan Serai, Perak, Azhari, 60, studied in SM Anderson in Ipoh before enrolling with the Royal Military College (RMC) in Form Four.

Although he received a scholarship to study medicine at Al Azhar University in Cairo, Azhari joined the military instead as RMC’s policy at the time was that the government and military had the first say and selection of students to join the armed forces.

“We were given a choice to join either the army, air force or navy. I decided on the navy because in those days, people said the navy travels the world and sees places. And sure enough when I joined the navy, I travelled the world and saw a lot of places, ” he says with a smile.

To date, Azhari has visited 35 countries with the navy and many more with the ICRC.

Azhari, who specialises in international humanitarian and maritime law, has served in various capacities on bases around the world. In the legal service of the Malaysian navy, Azhari was part of the team that brought the case of Malaysia’s sovereignty claim for the Sipadan and Ligitan Islands to the International Court of Justice. He was also part of the negotiation team that dealt with the hijacking of the Malaysian International Shipping Corporation vessel by Somali pirates in 2008, and the 2013 Lahad Datu intrusion in Sabah.

An important motivation for Azhari was his desire to see societies in other places and learn new cultures and languages.

“Some of the languages I would not be able to understand, but being there, and seeing the culture and people, seeing how people sometimes think differently from you... If you are out there, working together with them or interacting with them, you will be able to see the beauty of human beings from everywhere else. I was quite lucky, ” says Azhari.

After first joining the navy and training for a year in Singapore, Azhari, who was then a cadet still waiting to be commissioned, was sent to Germany in 1980 for further training and to bring back a multipurpose command support ship, the KD Sri Indera Sakti, that Malaysia had bought from Germany. A major tragedy occurred on the way home, and it was to be Azhari’s first time assisting in a humanitarian crisis.

“We travelled back with Indera Sakti through the Suez Canal. Along the way we stopped at Naples, Italy, where I had my first experience of an earthquake. We were among the few ships that were not washed aground. Being a military ship with hospital beds and doctors on board, we provided assistance to the people there, ” he explained.

Although the life of a soldier can be physically strenuous, Azhari soon learned that there are softer skills that are required for the job.

Azhari and his colleagues in the military made the pioneering naval journey to Shanghai, and helped to strengthen the relationship between the two countries.

“On the way home, we took the opportunity to stop over in two ports, Yokohama in Japan and Incheon in South Korea. And with those, they were the first military visits we ever paid those countries, ” Azhari recalls.

The most memorable experience for Azhari in his time in the navy was the stopover in Japan. As a soldier, Azhari was prepared for most things that were asked of him, but did not expect dancing to be one of them.“In most cases when the navy goes overseas, the cadets are the ones that have to do cultural shows. We decided to show a full Malaysian wedding with silat and dance. So we male cadets of the armed forces had to be trained to dance, ” says Azhari.

“As soldiers, we do all sorts of training to toughen ourselves up and then all of a sudden we had to have these soft movements... it was really difficult!”

They must have succeeded because the cultural shows were a hit and the ship stayed on another week as more shows were requested.

“When we were about to leave, all the friends that we made during the visit were crying on the jetty. So we had to go down, console them and [the press] took pictures of it – they wrote in the papers that Malaysia sealed ties with Japan, ” Azhari reminisces.

A life in humanitarian work

While some aspects of life in the Navy are exciting and adventurous, many other parts of the job are mentally and physically challenging.

At the end of the day, it is inevitable for soldiers to witness the effects of war and conflict, and that experience can take a toll on anyone.

One of things that most affected Azhari’s decision to go into humanitarian work was what he encountered working as a military peacekeeper during the Bosnian war.

“The things I saw in Bosnia really impacted me. When I came back, together with a few friends, we wanted the armed forces to be more aware of their responsibilities and what they are supposed to do to disseminate international humanitarian law, ” says Azhari.

The initial idea from Azhari and Colonel Kirby Abbott from the Canadian air force took off, and colleagues in Malaysia and across the world worked together to establish the first-ever Asia Pacific regional centre for military and international humanitarian law at NDUM in cooperation with the ICRC.

Today, the centre provides specialised training on international humanitarian law for civilians and military personnel of all ranks around the region.

“As soldiers, we feel the impact of war. It is soldiers that are being shot at and soldiers that fire the shots. We see destruction and we see injuries. And we also suffer and are affected by it, ” says Azhari.

“We also see the effect that war and conflict can have on someone who is not a part of the war itself – women, children, the civilian population. Though Malaysia is a fairly safe country and we don’t have a conflict here, in my service I have seen it elsewhere.”

As a soldier, Azhari says that he understands that there must be limits to war, and that there are consequences to every action taken. Because of that, it was not a big change for him to join the ICRC and support its long-term humanitarian mission.

“When you see the suffering of people, you try as much as possible to provide assistance, to alleviate some of the suffering.

“I had gone to Cambodia for landmine [identification and removal] training. Even until this day they are still removing unexploded landmines from past conflicts that took place in Cambodia. Imagine, that conflict is well over but the suffering continues until today, ” says Azhari.

Education has always played an important role in Azhari’s life, as his multiple degrees indicate: He has a law degree from Universiti Teknologi Mara, a masters in Business Engineering Management from Warwick University in Britain, and a masters in law from Cardiff University in Wales on a Chevening Scholarship.

He believes that education supplements the work that we do, and is supportive of those who wish to continue their studies even later in life.

“If you look at MBAs, it is basically the study of strategy. Business strategy is quite the same thing as what goes on in the military.

“The terminology may be different but the thinking is the same. If in the military we are talking about enemies, in business we talk about competitors. The strategy you plan for your product is the same thing that you plan for your military operation. For businesses it is about when and what market to enter. For the military, it is what time do you want to conduct an operation and when will you have the least collateral damage, ” he says.

What’s next for Azhari?

Well, in the short term at least, it involves some quality time at home with his family and 34 cats in Sri Kembangan, Selangor. 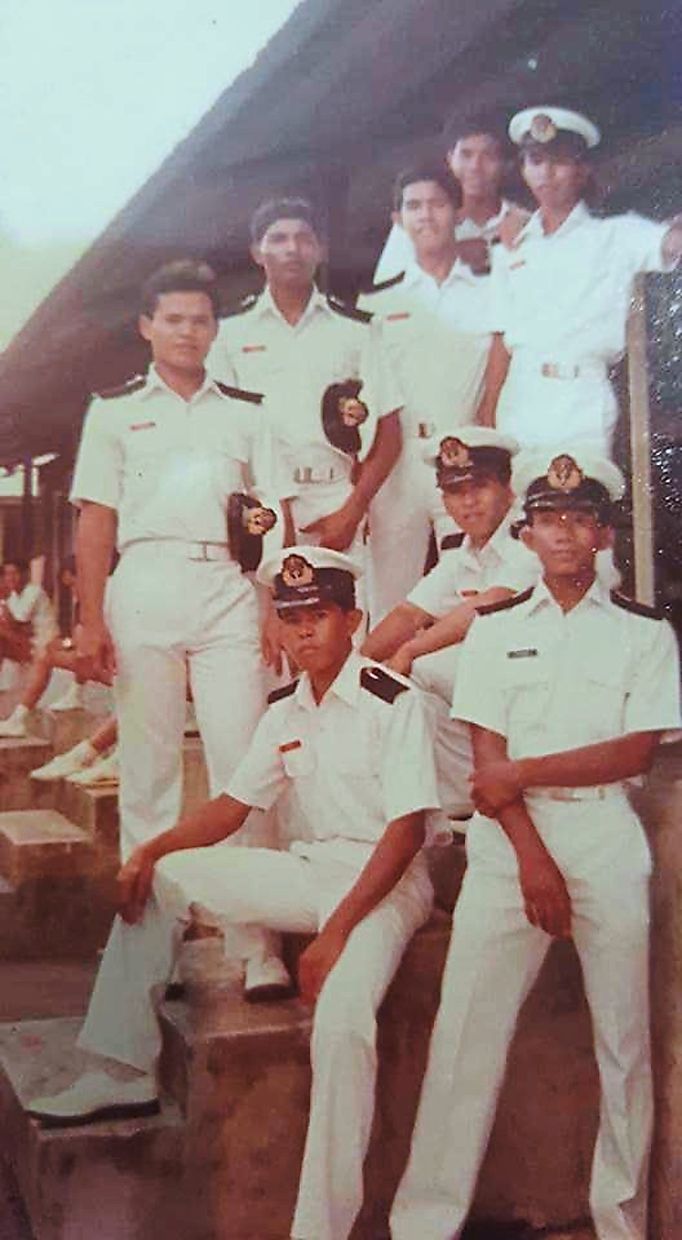 The officers and the gentlemen: Azhari with friends during his stint in the navy.

Azhari as a peacekeeper on route to Sarajevo, Bosnia.

Azhari was a peacekeeper during the Bosnian War. — Photos provided

My father the forager
Banning abortion is the first step in the US
The insurrection won’t end until Trump is prosecuted and disqualified from future office
Justice backed by AI
‘AI can predict outcomes, but not exercise judgment’
K-space takes off
Monkeypox is not our next pandemic, but it has lessons for us
Imran Khan and America
Asean tourism: Hot and bothered
Linguistic imperialism and language amnesia