Happier times: King Abdullah (left) laughing with Prince Hamzah earlier this year, shortly before the Jordanian monarch embarked on a tour of the United States. — AP

A pledge by Prince Hamzah to put himself “at the disposal” of King Abdullah II, his half-brother, appears to have resolved the feud within the Jordanian royal family that erupted at the end of last week. But the kingdom’s most serious crisis in decades was a salutary reminder of both the importance and the precariousness of Jordan’s stabilising role in the Middle East.

The events of the weekend remain murky and may never be fully disclosed. The kingdom has banned the publication of “anything related to the investigations, ” which suggests the palace is keen to draw a line under the affair.

But the roots of the royal ructions can be traced back to 2004, when the king removed Hamzah as crown prince, as a prelude to giving the title to his own son, Hussein. This was not unusual for Jordan – Abdullah’s father had made a similar switch in the succession on his death-bed – and Hamzah seemed to accept his demotion with equanimity.

But in recent months, he is reported to have grown strident in his criticism of corruption that he linked to his half-brother’s reign.

Perhaps more alarming for the palace, he is thought to have reached out to powerful tribal leaders, whose support is crucial for the monarchy and has been the bedrock of its power for almost a hundred years. 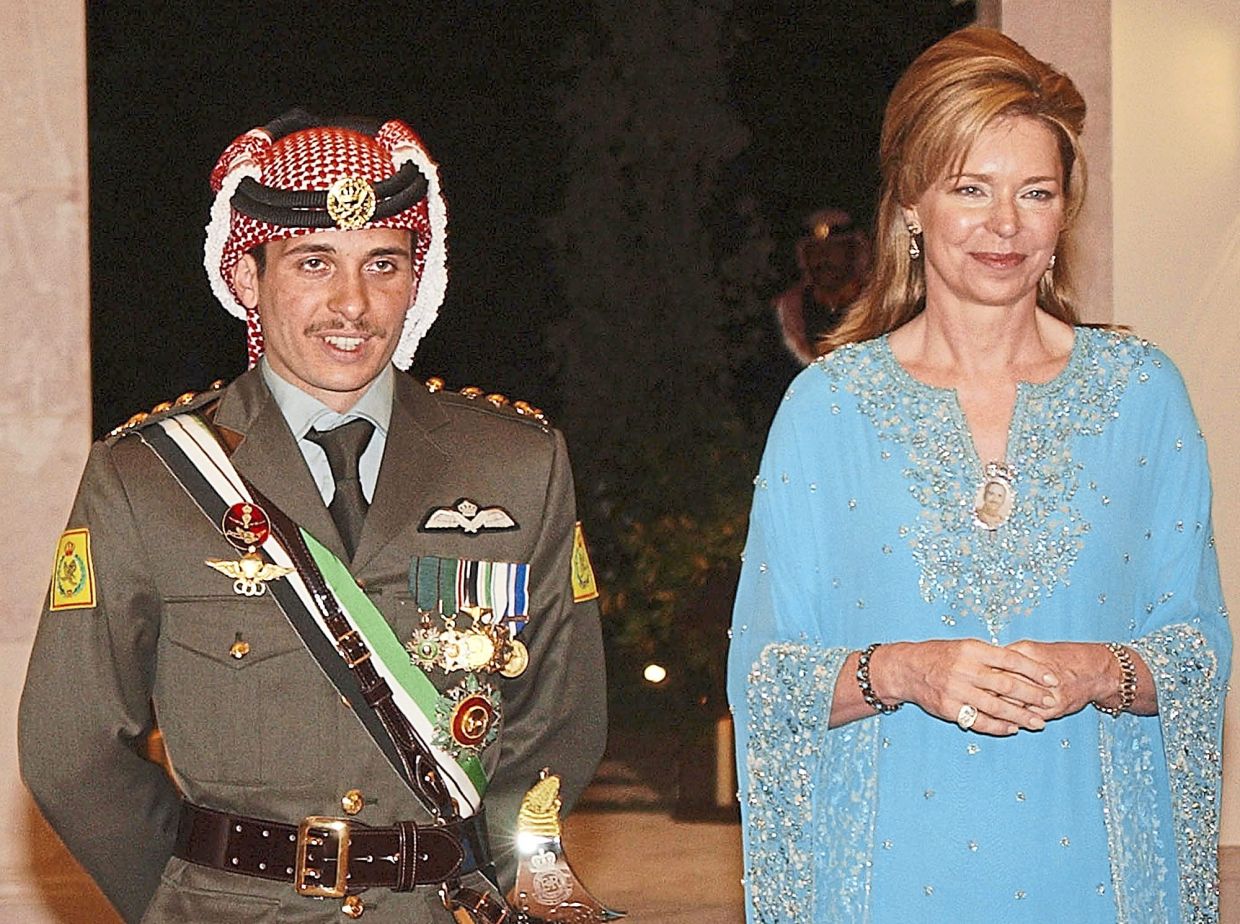 Prince Hamzah with his mother Queen Noor during his wedding ceremony in Amman in 2004. — AP

Still, it came as shock to Jordanians when Hamzah released a video saying he was under house arrest. Several of his associates had been arrested, and government statements suggested there had been an attempted coup, with foreign connivance.

This set off inevitable speculation that Israel or Saudi Arabia had been involved. Israel is frequently blamed for mysterious unrest in Arab countries, especially those that are deeply enmeshed in the Palestinian issue. Saudi Arabia has also become one of the usual suspects for unexplained developments and one of Hamzah’s arrested associates is a Saudi.

But Saudi Arabia, the United Arab Emirates and other Gulf monarchies were quick to issue statements of strong support for Abdullah. Israeli Defence Minister Benny Gantz offered help with what he described as “an internal Jordanian issue”. And the US Biden administration reaffirmed American backing for the king, describing him as “a key partner”.

But though the coup against Abdullah – if that is indeed what it was – failed, it nonetheless brought royal tensions into the open, breaking with the Hashemite clan’s tradition of dealing privately with internal dissent. Plainly, all is not well in the kingdom as it begins celebrations of its centenary today.

The US nonprofit Freedom House recently downgraded Jordan from “partly free” to “not free” in its annual assessment of the state of democracy worldwide. The report cited “harsh new restrictions on freedom of assembly, a crackdown on the teachers union [and] a lack of adequate preparations that harmed the quality of parliamentary elections during the Covid-19 pandemic.”

The 100-year-old monarchy faces serious challenges at home and abroad. The Jordanian government’s mishandling of the coronavirus pandemic has deepened longstanding public dissatisfaction over endemic corruption and a general economic malaise. By casting himself as a crusader against corruption, Hamzah might have scored powerful points against the status quo represented by his half-brother.

On the foreign policy front, Jordan has long felt taken for granted by the United States, Israel and the Gulf Arab countries, all of which rely on the kingdom to play a quiet but essential regional role.

The resentment in Amman deepened during the administration of President Donald Trump, when Washington seemed to go along with Israeli plans to annex large swathes of the West Bank.

Jordanians regard annexation with existential dread because it could export Palestinian nationalism into the kingdom, given that over half its population is made up of Palestinians displaced by Israel in the 1948 and 1967 wars.

More generally, Jordanians feel they are punished for the relative stability of their country in a restive region, the non-squeaking wheel that doesn’t get much grease. The consequences of instability in its neighbourhood are often visited upon the kingdom, most obviously in the form of refugees, whether from Iraq in the aftermath of the 2003 US-led invasion or from Syria after the rise of the Islamic State terror group and the subsequent civil war.

For the West, Israel and Gulf Arab states, the Jordanian government is an important contributor to political and diplomatic initiatives, whether on the Palestinians, Iraq or Syria. They also rely on Jordanian intelligence services in the fight against terrorism and extremism.

So the spectre of instability in Amman should have set off alarms in capitals across the Middle East, and in Washington. A collapse of order could easily turn much of Jordan into a facsimile of parts of Iraq and Syria just over the border, with militias, IS-like terrorist groups, tribal warlords and other forces battling it out in a situation of protracted chaos.

The Hamzah affair is a useful reminder of how much all the other parties stand to lose if, like many of its neighbours, Jordan begins to fall apart.

The government’s success in reining in Hamzah may in the short run strengthen the king’s hand and undermine oppositional activities.

The challenge for Jordan’s allies is to preserve the stability of the monarchy while pressing the palace for the political, institutional and economic reforms necessary to prevent a repeat of last weekend’s events. – Bloomberg