Shaping a new labour market for the post-pandemic economy 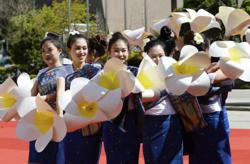 Hit hard: People with needs queuing up for food handouts, distributed by non-profit organisation Tenohasi, at a park in the Ikebukuro district of Tokyo. — AFP

WHAT took a decade to achieve unravelled within a matter of months. It seems like another age, but the start of 2020 had marked a decade of decline in the unemployment rate of the world’s advanced economies.

When the Covid-19 pandemic struck, the unemployment rate in Organisation for Economic Cooperation and Development (OECD) countries increased by an unprecedented 3.6 percentage points between February and April, to 8.8% – the highest rate in a decade.

The OECD unemployment rate has since fallen but is expected to remain above pre-crisis levels throughout 2022.

In the meantime, the devastation to lives and livelihoods around the world caused by the pandemic continues, with the roll-out and distribution of vaccines expected to take some time.

As the health crisis continues, its effects on employment risk becoming long-lasting.

In addition, accelerated technological adoption risks creating a “double disruption” in labour markets, with many jobs unlikely to return.

At the same time, the overall projections for job creation in the next five years are still higher than those of job losses. New jobs are expected to emerge due to shifting demand patterns and the use of new technologies in sectors such as the green economy, care economy and the education sector, as well as new roles in data and artificial intelligence across all industries and sectors.

How, then, should government and business leaders begin to shape a new labour market in 2021 and beyond – and support workers to thrive in the jobs of tomorrow?

Building a bridge to the recovery phase

The immediate response to the economic challenges posed by the pandemic was unprecedented. Governments around the world pumped trillions of dollars into the global economy, providing the necessary short-term support for businesses and workers in sectors that could not operate at full capacity. The use of short-time work schemes peaked at almost one in five employees across countries in the OECD for which data is available.

As the pandemic continues to unfold, governments must continue some of the urgent measures.

They can make income protection schemes more responsive to the changing situations of people, promote adequate occupational safety and health in all workplaces to ensure a safe return to work, and enhance social protection for those workers who are least covered, such as “gig workers” and those in informal employment.

At the same time, they must lay the foundations for a more resilient and inclusive recovery, and governments must also turn their attention to preparing workers for and re-allocating talent to new growth jobs and professions in the medium term.

Government policies can support this agenda with retraining and job creation through subsidies, targeted tax cuts, and investment programmes, while social protection provisions can be reshaped to ensure better coverage of workers in non-standard forms of employment.

Public and private employment services will also need to be expanded to support unprecedented numbers of job seekers in their reskilling and job transition from declining occupations to emerging or growing occupations.

It is estimated that 50% of currently employed workers will need reskilling by 2025 to meet the needs of a changing labour market. This will demand a significant expansion of mid-career reskilling and upskilling. For businesses there is a clear return on investment in doing so; two out of three employers expected to see a return within a year.

Workers in OECD countries whose jobs are at high risk of automation remain 30 percentage points less likely to participate in adult learning than their counterparts in low-risk jobs.

However, these efforts must be further accelerated and coordinated, both to support workers and to ensure adequate talent is available as businesses and economies bounce back.

The Reskilling Revolution platform brings together leaders from governments, business and society to collaborate on providing better education, skills and jobs to one billion people by 2030.

Ensuring that no one is left behind

The crisis has not affected everyone equally. Women, youth, ethnic minorities and low-income workers are among those hit hardest.

Young people have faced disruption to planned assessment and university closures. In addition, as hiring has slowed, young people entering the labour market are

facing a reduction in entry-level opportunities, internships and apprenticeships.

There is no time to waste to put in place comprehensive policies to avoid creating a lost generation and greater disadvantages for those who were already impeded from full access to learning and earning.

Both public-and private-sector efforts must ensure that as we rebuild, the post-pandemic labour market embeds justice and fairness for all segments of society. — Asia News Network

Angel Gurria is secretary-general of the Organisation for Economic Cooperation and Development. Klaus Schwab is founder and

executive chairman of the World Economic Forum, and author of Stakeholder Capitalism: A Global Economy That Works For Progress, People And Planet.