The historical animosity between South Korea and Japan has been going on for a long time, as this enactment of an attack from colonial-era Japanese soldiers by a few activists in Seoul shows. — AFP

“JEONGSINDAE” was a familiar word in my family. As a little child I didn’t know what it meant. Still, I discerned an association with something “forcible” and “unspeakable.”

One of my sisters, born in 1932, went to a secondary school affiliated with an education college. My father believed if she became a teacher, she could avoid being drafted into the “women’s volunteer corps.”

The word “Jeongsindae” receded from conversations, and my sister was spared. But for legions of women and girls in Japanese-conquered lands, it was too late.

During the war, Imperial Japan’s military supplied its troops with an estimated 100,000 to 200,000 sex slaves. The true number may be even higher. A large majority of them were Koreans.

The sexual enslavement was hushed up for four long decades. Then, in the late 1980s, a few feminist scholars and activists raised the issue of those who were taken into the “women’s volunteer corps” by force or deception during World War II. Yun Chung-ok, then a professor at Ewha Womans University, initiated the effort.

She recalled: “One day in November 1943, when I was a freshman at Ewha Women’s College, all of the students were gathered in the basement. A Japanese gave each of us a sheet of densely printed paper and told us to print both our thumbs on the paper without even reading it. Later I found out it was for conscription into the women’s volunteer corps.”

Yun’s parents forced her to drop out. She returned to Ewha after the war but constantly thought about the fate of her former classmates who were taken away. Probably motivated by survivor’s guilt, the professor of English literature devoted herself to searching for victims of Japanese military sex slavery and to advocating for their right to reparations.

The book resulted from a decade-long investigation by Kakou Senda, a Mainichi Shimbun reporter.

In 1962, Senda came upon photographs of women at the brothels while chronicling images of World War II. He set out to identify the women, and his book popularised the Japanese euphemism “comfort women.”

Like the term “women’s volunteer corps, ” it disguised the truth. The book itself remained a “hidden bestseller, ” circulating among scholars, the general public remaining in the shadows.

Some researchers contend that Korea was the safest country from which to pull women into Imperial Japan’s vast network of comfort stations.

Korea’s Confucian tradition strongly disapproved of premarital sex, so most teenage girls and young women were virgins. That dovetailed with Japan’s desire to mitigate the risk of sexually transmitted infections on the front line.

Among the women who were lucky enough to return home from that living hell, the Confucian tradition became a cruel yoke.

Their chastity was considered more important than their own lives. That was why the former “comfort women” had to remain silent while being collectively overlooked or ignored by society.

On the international front, South Korea’s position could not be properly represented in the 1951 Treaty of San Francisco, which addressed problems between Japan and the Allied Powers.

The treaty served as a basic document for the controversial 1965 Treaty on Basic Relations between the Republic of Korea and Japan, which, in turn, created the bilateral Korea-Japan agreement concerning the “Settlement of Problems in Regard to Property and Claims and Economic Cooperation.”

Under the agreement, Japan provided Korea with US$300mil as a grant and US$500mil in soft loans to spur its economic development.

This is the provision that is repeatedly quoted by Japan in asserting that it has no obligation to pay reparations to individual victims.

However, the international community holds that the agreement did not include war crimes or crimes against humanity and the Japanese government is liable for the acts of the Imperial Japanese military.

“The agreement was never intended to and did not include ‘claims’ involving the violations of human rights, ” says the 1994 mission report of the International Commission of Jurists.

The report describes the violations: “Life in the comfort stations was unmitigated misery for the ‘comfort girls’ and ‘comfort women.’

They were confined in cubicles of three feet by five feet, where long queues of soldiers violated them day and night. The women were heavily guarded, and could not leave the comfort stations.

“In addition to the degradation of being raped, many of them were beaten and tortured.”

The Seoul Central District Court’s ruling on Jan 8 that the Japanese government pay damages of 100 million won (US$90,800) each to 12 plaintiffs, including the estates of seven who are now deceased, may be the last means available to them to symbolically restore their honor and dignity.

Instead of criticising and rebutting what it sees as “repeated requests for apologies, ” Japan should reexamine its stance and how its response has been packaged in calculated rhetoric.

There are now only 16 victims still alive. They have asked for “a sincere apology” rather than monetary reparations.

It is time that the Japanese government considered how to offer one last apology in the way the victims want, to give their souls a little comfort in their last days.

Any effort to unravel the knotty relationship between Seoul and Tokyo may start from there. — The Korea Herald/Asia News Network

Lee Kyong-hee is a former editor-in-chief of The Korea Herald. 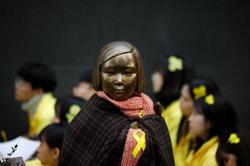