Guterres: 'Our world is struggling, stressed and seeking real leadership' ....The UN founding fathers, who had endured the pandemic, global depression, genocide and world war, fully understood the meaning of 'the cost of discord and the value of unity'. — Reuters

Just recently, 105 heads of state and 45 prime ministers from across the world addressed the first virtual United Nations General Assembly (UNGA) meeting. The leaders came to celebrate the 75th anniversary of this biggest organisation on earth.

This year’s general assembly looked to lose its excitement due to the absence of direct interactions among the world leaders, but not its substance for sure. What did the leaders convey to “we the peoples of the United Nations”, as said in the first line of its “sacred” charter?

They shared with us: reflections of the past, current state of affairs and, of course, expectations for a better future. In his first appearance at the UNGA, President Joko “Jokowi” Widodo reminded us

“There is no point of celebrating victory among ruins”, because “conflicts are still happening (...) and poverty befalls on many”.

He hopes to maintain multilateralism and appeal to UN member states to strengthen “collective global leadership”. In the midst of the prolonged Covid-19 pandemic, his hopes are surely ours.

It is certainly not an easy job for the UN secretary-general.

All nine “chief of the administrative officers” as stipulated in Article 97, have struggled to make this body “a center for harmonising the actions of nations in the attainment of these common ends” (Article 1.4).

The centre is old enough but this goal is far from being attained. In the third quarter of century of its existence, the UN has been bearing the same old problems, military conflicts from one region to another, poverty and disease, to rivalries among big powers. As we are one-fifth way through the 21st century and entering the digital age, this supposed-to-be powerful organisation has to confront newer challenges like adapting to climate change and regulating the digital space.

All needs to be immediately addressed and solved, but the means and infrastructure to mitigate the “virus” remain unchanged or slightly restored. One of the many chronic ailments the UN endures is sadly the less sustainable funding.

During Donald Trump’s presidency, with his “new isolationist” policy, the US withdrew from UNESCO (2017), the World Health Organisation (WHO) and the Paris Agreement (2020 respectively). It is Trump who also favours the “peace through strength” approach, which he claims a success in Afghanistan, Iraq, Syria and the Middle East.

It is in this context that Stephen Schlesinger of the World Policy Institute said the task of the UN secretary-general was to rally world public opinion around issues that wouldn’t necessarily have been addressed otherwise..

The current UN secretary-general, Antonio Guterres, grumbles, ” Our world is struggling, stressed and seeking real leadership”, and reminded that the UN founding fathers, who had endured the pandemic, global depression, genocide and world war, fully understood the meaning of “the cost of discord and the value of unity”.

However, it is also well understood that people of the world expect so much from this most reliable global institution. It is as if the UN resembles a hypermarket, where they can shop for almost anything to meet their needs and the job of the UN secretary-general is as its CEO, responsible for and guaranteeing the availability of all items. But people tend to forget that a secretary-general is not a superman.

Simon Chesterman and Thomas M. Franck in their book Secretary or General: The UN Secretary General in World Politics (2010) accurately say that the role of a UN secretary-general is “a role bifurcated between the tasks of secretary and general, and almost always more of the former than the latter.”

In short, the challenges confronting whoever the UN Secretary-general are classic and, perhaps, eternal.

UN revitalisation continues to go on limping, while new conflict, as between Armenia and Azerbaijan, continues.

This poses another challenge for the CEO since the deliverables do not necessary depend on him (or she in the future), but the main “shareholders”.

It would, therefore, be pertinent to listen to what Dag Hammarskjold, the second UN secretary-general, who wisely said, “The UN was created not to lead mankind to heaven but to save mankind from hell.”

From now on, “we the people” need to observe self-introspection on what we have given and not merely to demand. — The Jakarta Post/ANN 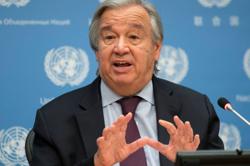