Beirut Explosion: How the youth took matters into their own hands

AS evening settled in, clouds drifted over the city of Beirut on Aug 4. Unknown to its citizens, at that exact moment firefighters were rushing to Warehouse 12 at the Port of Beirut. A raging fire had broken out and several in the fire crew noted that there was “something wrong” with the fire and that it produced a “crazy sound”.

Then came the first explosion, sending up a cloud of smoke followed by flashes of sound and light from the stored fireworks. Tarek and Emma, residents in the surrounding area, stated that “earthquakes were common” and subsequently not many noticed the first blast and how it shook the ground. Less than a minute after that came the more substantial explosion – the blast that changed the lives of thousands. Emma recounts that within seconds the sky was tainted a bright orange. A condensation cloud surrounded the port followed by a thundering boom. The resultant earthquake was speculated to be the result of one of the most powerful non-nuclear explosions in history.

The fire was put out by the next morning, Aug 5, but even as we near 20 days after the accident, the sounds of glass shattering and screams ringing remain unextinguished in the minds of the Lebanese community in the area. The botched handling of a chemical cache, stored in a place it was never meant to be kept, was the last straw for the public.

The community rose from the ashes and took matters into their own hands. Armed with patriotism and love for their nation, the streets were soon teeming with fearless volunteers on the frontlines of this disaster. Beirut was numb, aghast by the explosion, but young Lebanese took to the streets and renewed the hope of rebuilding Beirut. Volunteering initiatives directed by the youth started appearing both on the ground and online.

Beirut’s youth have been significantly active and persistent in the movement to rebuild the city.

Early morning on the day after the blasts, they showed up in large swarms to locate victims and those who were missing, alive and buried under the rubble. They showed up with friends, with family, and cleared the streets. But the effort was not merely on the ground. A major portion of the work was done online – from donation campaigns to volunteer sign-ups to centralised databases keeping track of those missing and found. One such initiative that focused on the last was Locate Victims Beirut.

Due to several factors – including the continuing Covid-19 pandemic, an economic crisis, and political unrest – the ground rescue forces were unable to efficiently coordinate lists of missing/found people and this resulted in a lot of disorientation among those who were separated from their loved ones and searching for them.

With the city still reeling from the blasts, two young adults from around the world – unbeknownst to each other – initiated separate projects and set up a social media account (Zahraa Issa) and a website (Emma Sleiman). With the goal being to reunite families and loved ones by locating missing people and to help provide aid and support to those impacted directly, the initiators decided to merge organisations and formed Locate Victims Beirut (LVB).

Currently with over 100,000 followers and a team of around 50 members, LVB also has volunteers based around the country in Lebanon as well as Britain, France, the UAE, the United States, etc, all working to support Beirut. Owing to its swift response, hospital staff, first responders and the population were able to access LVB resources and quickly identify victims and survivors of the blast.

The world has not fared well in 2020 and it has been significantly worse for those impacted by horrific disasters such as this one. But it is in these difficult moments that people are realising that change can only be brought about with a community-wide, or even global, effort. The call for change is long overdue and now people have realised that they themselves must answer the call.

Akshit Anchan is a senior year secondary school student studying in Dubai, UAE, and is currently working at Locate Victims Beirut as the director of outreach and web development. 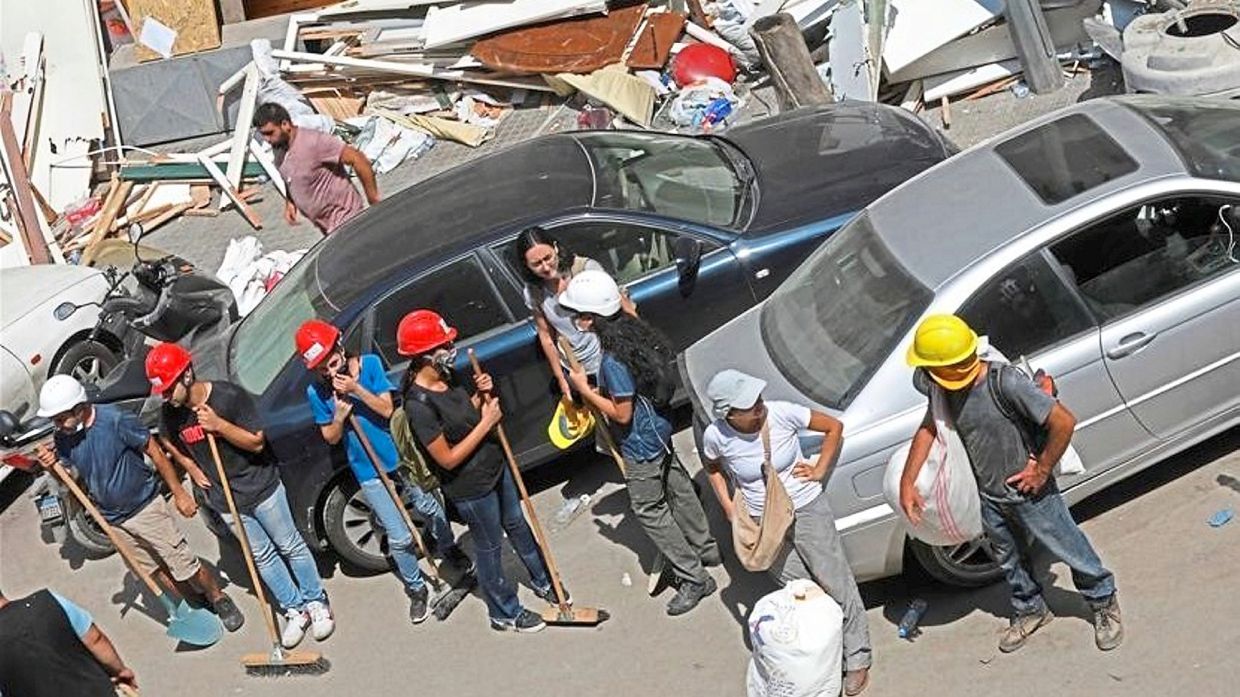 (Above and left) Lebanese youth took to the streets of Beirut with friends and family early in the morning on the day after the blasts to help locate victims and the missing and clear up rubble. — Locate Victims Beirut

PIX CANNOT BE BLOWN UP - too small