Countries apart, but close at heart

SHE wanted her child to be a Malaysian citizen, so Miranda (not her real name) made sure she was in the country to give birth to her baby.

However, the woman in her 30s, had to deliver her baby daughter alone during the movement control order (MCO) period.

This was because her husband, a foreigner working in the United Kingdom, could not enter Malaysia without a Long-Term Social Visit Pass (LTSVP).

“I had a difficult delivery and suffered severe postpartum depression.

“I had to care for the child 24/7, I was weak, had to endure lack of sleep and feared about the future.

“At that time, it seemed almost impossible that my husband would get permission to enter the country, ” expresses Miranda, a company executive.

Fortunately, her husband has secured approval from the Immigration Department to enter Malaysia and will be taking the earliest available flight home.

“However, until we are face to face, I feel insecure.

“It has been tough. Although the pandemic is devastating, to be torn apart from your loved one and the family at a time like this is all the more tormenting, ” she says.

Miranda is just one of many Malaysians who have to be apart from their foreign spouses and children due to the restrictions in the MCO.

But things are set to look up – on Monday, Senior Minister Datuk Seri Ismail Sabri Yaakob announced that non-Malaysian spouses and their children who are stranded overseas can enter the country after obtaining permission from the Immigration Department.

He said this is applicable to the children of Malaysians born abroad and who are not citizens, according to reports.

Another Malaysian who married a foreigner, who wishes to be known only as Sandra, is looking forward to her husband returning from Myanmar.

“He went for a cardiac implant surgery and we have been very worried about his health since he doesn’t have any place to rest while recovering from the procedure, ” she says.

An expectant mother, Anne (not her real name), is hoping her husband will be by her side soon as she is now eight months pregnant.

“I’m also living with senior citizen parents who are 80 and 74, while caring for my older son.

“I really need my spouse for support as I’m delivering soon and I don’t even know who is going to drive me to the hospital in case of an emergency, ” says Anne, in her 30s.

A marketeer, who wishes to be known only as Lee, 37, says her Indonesian husband lost his job as a pilot but was stuck in India and couldn’t return to Malaysia because he didn’t have a LTSVP.

She says it has been difficult for the family since her husband lost his job due to the airline industry being hit hard in the pandemic.

“He now has to spend his days in a foreign land, even though he wants to come back. I am trying my best to give him emotional support.

“It is painful for my husband when our two-year-old son can only see him through video calls, ” Lee says.

A retired lecturer, who wishes to be known only as Amy, 57, says she hasn’t seen her American husband for five months.

“He works as a business consultant abroad and was supposed to come back but couldn’t when the MCO was enforced.

“It has been an emotional roller coaster for me. We both miss each other very much.

“He also misses my cooking and eating rendang for Hari Raya, ” she says, adding that the couple plans to spend as much time together as possible when he returns.

“Perhaps we will go for cuti-cuti Malaysia (go for a local holiday) when he is back.”

Faridah Zulkiflie, 36, who runs an influencer marketing and social media agency, had just gotten married to her German husband in November last year. But it has been six months since she saw him as he went back to Munich in January.

“We couldn’t proceed with the LTSVP application because our marriage certificate will only be ready after three months.

“There is a cooling period of six months before we can apply for the LTSVP.

“So he returned to Germany first to settle all his projects there and was supposed to come back to Malaysia after on a tourist visa. But then, Covid-19 happened, ” she says.

It is a struggle for Faridah as she lives alone and misses her newlywed husband.

“May this never happen again, this global pandemic, ” she remarks. 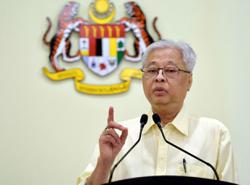 Non-citizens must get approval before coming back