Winning storytellers: (from left) Glenys, Aelcie, Jasmine, Laetitia and Emelly are part of the septet who were named champions for their performance. STUDENTS at Keningau Vocational College in Sabah have once again made a noteworthy contribution in promoting Malaysian folklore to the world.

“We received news of the win on June 6.

“This achievement means a lot to us as it shows our college’s effort in improving students’ English proficiency.

“It also shows that Malaysia is rich in interesting folklore and that we should start bringing these tales back,” team leader Emelly told StarEdu.

The team’s performance video, spanning close to five minutes, tells the story of the unlikely friendship between Anang, a water-bound creature locally known as Galap, and a human boy named Katu – despite the historical conflict between the two species.

“Galap was a race which humans regarded as a threat while the Galap perceived humans to be monsters,” explained the team’s English language teacher Sirhajwan Idek, who wrote the script.

The story was chosen because it reflects the conflict and prejudice present among the different groups of modern society, which could be prevented and resolved if people just talked to each other, he said.

“This achievement can be considered a global recognition and appreciation of our traditional culture and folklore, which should serve as a reminder for us to strive to preserve our cultural heritage,” he added.

To deliver the performance, the team made use of the skills they had learnt from their cosmetology programme – which Emelly described as the “best part” about the project as they got to put on makeup to portray their characters better.

The main challenge of their participation, she shared, was putting together the whole performance due to the Covid-19 restrictions put in place at the time.“The process required patience as we had to learn to act out our lines effectively, pronounce words correctly, all while filming ourselves.

“We initially did our recordings at our own homes but some of the videos did not have the desired quality so we had to redo them.

“When we were suddenly required to return to physical classes and stay at the dormitory, it caused us to take even longer to complete the performance video,” she recalled.

Entering the competition with “no expectations”, Emelly said they were “very surprised and happy” when they received news of their win.

College director, Johari@Jaibet Sabin expressed his delight in the students’ achievement which supported arts and folklore as a theme in the college activities and projects.Sirhajwan shared that the performance was a part of the college’s initiative to revive arts and folklore that are “slowly fading away due to modernisation and other social influences”.

He urged the younger generation to incorporate elements of local traditions and folklore into their works as a means to preserve and promote them.

“The younger generation needs to understand that folklore contains universal values and messages that transcend time and borders. These are meant to cultivate ethical behaviour and manners among society,” he said.

Charis, 19, a student in Kuala Lumpur, is a participant of the BRATs Young Journalist Programme run by The Star’s Newspaper-in-Education (Star-NiE) team. To join Star-NiE’s online youth community, go to facebook.com/niebrats. 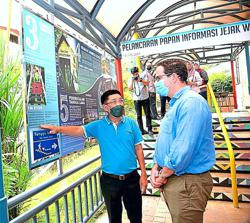