IN the weeks to come The Star’s Newspaper-in-Education (Star-NiE) programme presents a collection of stories was donated by The Strait Times newspaper of Singapore for use by teachers and students in the classroom.

The stories chosen are classis legends, myths, fables and folklore from around the world rewritten as modern news or feature stories. Young readers and adults will enjoy reading the likes of William Shakespeare’s MacBeth and Hamlet. and Mary Shelly’s Frankenstein in a modern news format.

But these stories are not just good yarns. They touch the soul, nourish the mind, and give readers a better sense of their place in the world. By sharing about the plots and characters readers can make the stories a part of their lives.

The Geats were people who lived in what is now Sweden. The story of Beowulf is thought to have been passed by word of mouth from generation to generation before being finally written down as a poem in AD 1000. So it is impossible to say who first came up with the story.

The tale is fictional, although it highlights real people and events that took place in Denmark and Sweden between AD 450 and AD 600.

The poem exists in only one manuscript, which survived the destruction of many artifacts and works of art ordered by England’s King Henry VIII, to reduce the power of the Catholic Church in the 16th century.

It also survived a disastrous fire in the library of Sir Robert Bruce Cotton, where it was being kept. The Beowulf manuscript is now housed in the British Library in London. 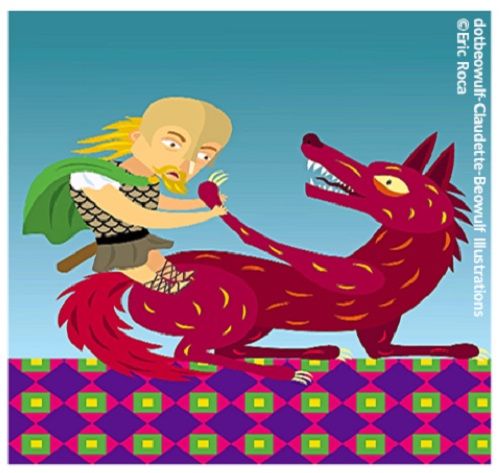 THE man who once saved a town from a killer dog became a hero again last weekend, when he rescued it from a komodo dragon. Only this time, that bravery cost him his life.

Today, many still remember how Beowulf first saved the town of Denmark from a rampaging dog 50 years ago.

The trouble started when Hrothgar, a business tycoon, threw a party at his house to celebrate a deal. It got so noisy that it woke the dog that was sleeping in the swamp nearby.

The canine, said local residents, was a huge beast named Grendel. It had a nasty temper and razor-sharp teeth, though till that night, no one had thought it could do real harm.

Furious at being disturbed, Grendel stormed into Hrothgar’s house and attacked several guests, killing a few and injuring many more.

The Primary Production Department was called in, but it was unable to track down the beast. The attacks continued for months, and Hrothgar was at a loss as to what to do.

To convince everyone that he was up to the task, he even boasted about his past achievements – such as winning first prize at the national swimming competition for schools.

Hrothgar was impressed and agreed to let him try.

Beowulf got his chance the following night. The snarling creature appeared at the house, hungry for blood and with a hellish flame in his eyes, recalls one witness.

The battle that followed was so spectacular, the story is still being told.

Beowulf fought Grendel unarmed, and so ferociously that, for the first time, it was the dog that was scared. As it turned to run, tail between its legs, Beowulf dealt the final blow and ripped off one of its legs. He declared that the animal would hurt no one again.

Hrothgar and his men were overjoyed. But the celebrations did not last long.

Grendel’s mother, an even fiercer dog, decided to retaliate by attacking one of Beowulf’s friends and dragging his body into the swamp.

Beowulf ran after them. When he saw that his friend was dead, he knew what he had to do next.

“It is better to avenge a friend than to mourn too much, ” he thought.

The mother dog fought savagely, and Beowulf found himself struggling to stay alive. But, using a sword he found in the swamp, he finally killed her.

The town exploded with relief and joy. Residents hailed Beowulf as a hero and showered him with food and drink.

He later returned to Geatland, completed his national service and went on to become mayor of the area’s Community Development Council.

The years that followed passed peacefully – that is until last week, when history repeated itself.

A Geatland resident on a walk in the nature reserve foolishly disturbed one of the komodo dragons that lived there.

Enraged, the reptile went on a killing spree. Although he was now in his 60s, Beowulf went after it. He managed to kill the beast, but not before it bit him in the neck – a wound that proved fatal.

At his funeral yesterday, a tearful Geatland resident said: “He was the gentlest and kindest man. This story will be told and retold for years to come.”

TYCOON - A businessman with great wealth and power

SPECTACULAR - Grand and out of the ordinary

MOURN - To feel sad about

If you enjoyed this, read:

> Stories Of Beowulf Told To The Children by Henrietta Elizabeth Marshall