Recess in the new normal

SCHOOL and canteen operators are not leaving anything to chance.

Although the Education Ministry’s strict standard operating procedure (SOP) requires every student to queue at least one metre apart, collect their food, make their way back to class to eat at their desks, and send the food containers back to the canteen to be disposed of, a check by StarEdu found several schools and canteen operators teaming up to implement additional guidelines for the safety of their students.

At SMK Assunta, Petaling Jaya, students have to place their orders and pay the money to a class representative before 8am.

The school’s canteen operator Sunny Hee Teng Chai said the class representative will then send the orders and money to him in the canteen and collect the food later during recess.

This was the school’s way of keeping the number of students in the canteen at a minimum, he said, adding that there were only three or four options on the menu.

The students also have to place their orders for three days so that the class representatives won’t miss out on lessons every time they have to go to the canteen to hand in the list.

Response, said Hee, was good on the first day.

Things were not that great on the second day as the orders dropped to less than half.

“Maybe some parents are still not comfortable letting their children eat food from the canteen. Maybe they are not confident the SOP would be properly implemented so they cook and pack food for their children to bring to school,” he said.

But Hee is optimistic as he believes that business will pick up when everyone is allowed to return to school.

He expects that there will be a change in how canteens operate when Years Five and Six pupils, Forms One to Four students, remove class students and Form Six Semester 1 students resume face-to-face classes on July 15; and Years One to Four pupils return on July 22.

“Perhaps next time canteens will only prepare one or two options a day. I don’t see us operating like food courts anymore, providing an array of items for students to select.

“It will be just like school canteens overseas. Balanced meal sets are prepared, ready for the students to collect at recess.”

Hee, who also runs canteens in other schools including SMJK Katholik and SK Taman Megah, said this would make things easier for canteen operators.

“For example, when I serve chicken rice, I would know how much chicken to buy, and how much rice to boil,” he said.

At SMK Damansara Utama, Petaling Jaya, students are not even allowed to enter the canteen.

Suriani Sharif, who sells western food in the school, said she has not seen her young customers at all as she is only given a list with their names and orders written on it daily.

“The list is passed to me by the class teachers.

“I just prepare, pack and send the food to the classes,” she added.

It was quite a novel experience for this 22-year veteran canteen operator, seeing the canteen benches empty and hearing only the voices of the school staff.

But she is glad that she is ‘back at work’ again even if the menu is limited and she is only preparing food for a small group of students.

“Hopefully things will be back to normal soon,” she said.

“Food and drinks were pre-packed in takeaway containers and the staff maintained social distancing throughout the preparation and food distributing processes,” she added.

Many of them also employed the pre-ordering method where students order their food early in the day and pick it up during recess.

Siti Normah, who also runs the canteen in SMK Jalan Tiga, Bandar Baru Bangi, said just like her counterparts in other schools, she is grateful to regain her source of income.

“Initially, I was worried about crowd control but with the help of the teachers, everything went smoothly.” 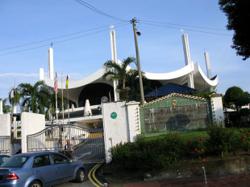