WHEN these individuals graduated, they had visions of themselves standing in front of a classroom, enlightening young minds with their knowledge.

Perhaps even inspiring a few of their students to become teachers themselves.

Sadly, the hopes and dreams of some of these teacher graduates have been put on hold as they anxiously wait to see if they will even be given an offer to teach in one of Malaysia’s 10,000 government schools.

Some of them were hired to be substitute teachers and teaching assistants on a contractual basis to help schools cope with the shortage of teaching staff.

According to the Education Ministry website, Malaysia has 419,904 teachers teaching in over 10,000 government schools across the nation as of Jan 31,2019.

There have been complaints by schools and parents alike about the lack of teachers in schools, especially for certain subjects like Chinese language.

StarEdu spoke to some of these graduates, all waiting more than a year for an interview opportunity, to find out more.

*names have been changed

All he wanted to do was become a teacher but he has been waiting for more than a year since completing his education degree to be offered a teaching job.

In fact, Syazli says there is still no sign that he will be getting a posting any time soon.

Even getting a callback for an interview took a long time.

He says he applied for teaching positions with the Education Ministry in 2018, immediately after graduating but was only invited for one interview, a year later.

He thinks the reason it has been so difficult to get a posting is because of the uncertain economy.

He majored in Mathematics at Universiti Pendidikan Sultan Idris (UPSI) and says that he has been applying for Mathematics teacher posts but to no avail.

“There are just no openings for this subject and there are some schools where there is an excess of Mathematics teachers, ” he points out.

While waiting for his posting, Syazli has been giving private tutoring around Ipoh and Tanjung Malim from Saturdays to Wednesdays.

At the same time, he adds, he is pursuing his Masters at UPSI.

He was also a replacement teacher at two different schools last year.

He says he originally wanted to be posted at schools in Perak, Labuan or Selangor but now he does not mind being posted anywhere.

So long as there is a stable Internet connection.

“Right now, a lot of a teacher’s work such as filling in data forms is done online and an unstable Internet connection will really disrupt the workflow, ” he adds.

Syazli says that the authorities should also stop sending any teacher to a school just to fill in an empty post for a subject.

“For example, English. The authorities should send a teacher who majors in English or has experience teaching English to that school, ” he says.

“If teachers teach their options, they will be more motivated to teach their students better.”

They said “no vacancy”

Educating is my passion, says an aspiring teacher looking for a job.

Unfortunately, Anis has to settle for being a home tutor instead of a full-fledged teacher at a government school.

She also had two substitute teacher stints in Terengganu for about three months.

After more than 15 months since applying for a permanent teaching position, she is still waiting for a call to attend an interview.

“They only told me they will call me if there is a vacancy for my subject choice, ” she says, adding that she has opted to teach Physics or other pure science subjects.

She majored in Physics for her degree in Education.

Strangely, Anis says that Bahasa Melayu and English Language optionists do not face this problem as there is a constant demand for these teachers.

She does not believe it is true that there are not enough vacant teaching positions in government schools.

In fact, she says that she has constantly heard complaints from other teachers that there isn’t enough of them in schools and that their workload is too heavy.

To make ends meet and to keep up with her National Higher Education Fund Corporation (PTPTN) loan instalments, she has been tutoring from home.

Anis says that she thinks the reason there are no vacancies is because they have raised the retirement age of teachers across the board.

“There is no guarantee anymore that joining the education field means you will have a job upon graduating.”

Anis still hangs onto hope that she will get a call soon so that she can inspire more students to take up a pure science package.

“I want to try a different teaching method from the one I experienced in school.

“I want to make learning science more interesting so that students will enjoy the learning process even though the subject is considered to be quite tough.”

It has been more than a year since Daniel graduated and he is still waiting for an interview slot with the Education Ministry.

He received an interview slot with Maktab Rendah Sains Mara, which does not fall under the purview of the ministry.

In the meantime, the Johor native has been working up to three different jobs to make ends meet.

“Graduates out there have no choice but to do some form of work while waiting for a posting because we just don’t know when we will get the call, ” he says.

Daniel likens his situation to the medical graduates who also have to wait for their house officer posting with the Health Ministry before they can officially be considered a medical doctor.

“To me, having a degree today is worthless because so many graduates have to work hard to find jobs with employers being harder to please, ” he adds.

He says this situation now exists because there are so many teacher graduates coming out of public universities.

On top of that, there have been budget cuts which affected the number of teachers that can be hired.

He says that not only do plenty of graduate teachers have to wait so long for the interview, those that make it through have to continue waiting to get their actual posting.

“Essentially, there are not enough teachers in government schools, ” he adds.

He says this is based on his chats with school teachers who revealed to him that they have to teach other subjects because of the shortage.

“Aside from my interest, being a teacher gives me real satisfaction when my students are able to absorb all the knowledge I share with them, ” he says, adding that he has opted to teach Music.

“I’m sure every teacher out there wants to see their students succeed. Like me, I want to see my students become better and more successful than I am one day.

“I just want to teach. It does not matter where anymore, ” he says.

Alicia has been waiting for almost two years now for a phone call inviting her to a job interview for a teaching position.

Despite the long wait, she counts herself slightly more fortunate than some of her teacher graduate peers.

“Some of my seniors had to wait up to five years for their posting, ” adds the Seremban native.

Alicia says she wants to teach Chemistry and has attended many interviews with the Public Services Commission but has been unsuccessful in securing a teaching job.

She finds it odd that there are non-education graduates who have allegedly received teaching position offers in the public sector.

What is even more surprising is that they do not even know what a daily teaching plan (rancangan pengajaran harian) is.

She says there are some who have private messaged her in a Telegram group for those waiting for teaching posts asking about this basic information.

Trying to find a job has also been difficult for her as “employers are weary if I will leave immediately the moment I get a teaching position.”

So far, she has held temporary substitute teacher positions at a kindergarten and a school.

She is also running an online business to keep herself afloat.

Alicia says she is not sure why it has been so difficult for teacher graduates to get a posting in the public sector.

“But I suspect it is because the Government does not have the money to pay us, ” she adds.

She also says that public higher education institutions should also not take in too many students and “give them hope that they will become teachers when they graduate.”

“For some of us, it is a waste of money when we can’t afford to be a teacher but have to pay our PTPTN debt, ” she says in exasperation.

No vacancies for teachers No directives yet for teachers to report for duty, says Ismail Sabri 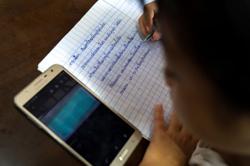