(Sixth and fourth right) Nik Nazmi and Fadzli together with members of previous committees, facilitators and the movement’s beneficiaries come together to celebrate its 25th anniversary.

IN the past 25 years, The Kalsom Movement (TKM) has impacted more than 5,000 lives with the involvement of over 1,000 facilitators and conducted more than 40 programmes.

It is recognised by the Malaysia Book of Records as the longest running student-led motivational camp.

It aims to advocate against education inequality and instil civic awareness among the youth in local communities. In addition, it has and continues to empower underprivileged students.

Singer Dr Hanie Soraya, a medical graduate from Mansoura University in Egypt, who gave a special performance at the dinner, was a facilitator in Projek Kalsom 21.

Formerly known as Projek Kalsom, the movement is registered as Kelab Belia Kalsom and tackles education inequality in Malaysia.

It was established in 1994 by a few Malaysian students after the plight of a struggling mother, Kelthom Abdullah, to pay for her children’s schooling expenses was published in a Malay-language daily in January 1993.

Detailing her troubles in an interview for the newspaper, Kelthom’s chief concern was that she could not afford to pay her children’s schooling expenses.

A few Malaysian students all the way in the United Kingdom were inspired to do something about it.

After running a donation drive to help Kelthom educate her children, the students decided they wanted to do more.

These turn of events led to the start of Projek Kalsom, a programme aimed at educating and motivating secondary schools students living in rural parts of Malaysia.

Its first motivational camp was held in Jerantut, Pahang, in 1994.

It is endorsed by the Youth and Sports Ministry as well as the Education Ministry.

The movement was recently appointed as a partner for the United Nations’ Sustainable Development Goals, covering Goal 4 and Goal 17, namely Quality Education and Partnership for the Goals.

The Projek Kalsom motivational camp was held in Bandar Penawar, Johor this year.

Volunteers comprising Malaysian students enrolled in tertiary education across the world, are the facilitators at the camp.

Their skills and talents are put to good use as they assist and motivate the 16-year-old students from disadvantaged backgrounds.

Modules at the five-day camp are tailored according to the four pillars of the movement.

These are English language proficiency, development of academic and non-academic skills, exposure to post-secondary education opportunities, and nurturing the Kalsom spirit.

Fun and interactive elements are injected into every module the volunteers carry out.

The movement encourages student participants to see themselves not only as recipients but also as agents of change.

They in turn organise a mini Projek Kalsom to benefit their peers after the camp. 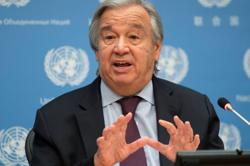 An end to plant watering woes
Making sure our children learn
Positive education, a strategic choice
Bringing back balance to the force
Green materials show great potential
Thank you, teachers!
Frontliners fighting for our children
Teacher who made rape joke transferred
Varsity students may return to campus after Raya break as scheduled
Teacher who allegedly made rape jokes in Ain Husniza’s class transferred