Stepping down after 11 years at the helm

GOODBYES are never easy. But if you are brave enough to say goodbye, life will reward you with a new hello.

Prof Chuah, 58, who has often been described by his staff as “married to the job”, retired after heading UTAR for 11 years and seven months.

“I was already planning my retirement at the time. I believe that I’ve given the best I can,” he reveals.

An individual, says Prof Chuah, cannot stay in the same position for too long.

“If you do, ideas will run out and people will be able to guess what you want and tell you what you want to hear. That isn’t good for the progress of any institution,” he shares.

It is good for the institution to have a new president and chief executive officer, he adds, as Prof Dr Ewe Hong Tat is younger and will be able to bring in new ideas to propel the university to another level.

Prof Chuah joined the university in March 2008. He has had an illustrious career with UTAR, creating many firsts for the university.

A visionary with a keen foresight, his strategic decisions have elevated UTAR to tremendous heights of achievements that brought the university to the world map. Under his focused leadership and his commitment to quality teaching and research, UTAR achieved favourable rankings and attained impressive awards from reputable institutions and Malaysian authorities.

During his tenure as president, UTAR attained Self-Accreditation Status awarded by the Malaysian Qualifications Agency.

In addition, for the first time, UTAR was awarded the Sin Chew Education Award 2018/2019 for Outstanding Educational Institution in the Private Universities/Colleges category.

In 2017/2018, UTAR was also awarded the CSR Excellence Award at the Sin Chew Business Excellence Award for its services and projects to the community, an initiative which he fully supports.

It was also during Prof Chuah’s time as president that many staff and students won numerous local and international awards for performances in sports, academia, projects, research and publications.

According to Prof Chuah, 95% to 97% of graduates are able to secure jobs within six months of graduation.

“Feedback from the industry is positive and encouraging.

“Many international companies come to recruit our students and send them across the world because they know how to fit in well,” he says.

Prof Chuah believes that retirement is just the beginning of another chapter.

“I would add to this saying. ‘After you think you have contributed enough (to the best of your capacity), then you should muster up the courage to retire (from the position) on a happy note with grace and dignity’,” says Prof Chuah, whose official last day of service is on Sept 30.

“They were very reluctant and gave me a firm no. It took me about a month and a number of meetings to convince and explain why it is time for me to go. I am very glad they (board of trustees, council, directors) finally agreed for Prof Ewe to take over,” he says.

“A succession plan is important. A lot of people don’t know how or want to step down because they hold onto the mindset that I’m the best and no one can replace me - which is bad.

“I am very fortunate to have had supportive vice-presidents and deans during my tenure. Some have shown very good leadership skills.

“They share a common goal in building up the university and should be the ones to take over.”

Prof Chuah who is currently on leave, is confident that Prof Ewe will take UTAR to greater heights.

“Give him some time and don’t pressure him,” he says.

An academician to the core, Prof Chuah finds joy through books. Reading a variety of materials have been one of his methods of “slipping into relaxation mode”.

“I enjoy reading a lot and I love reading books about kung fu! Really!” he says, laughing.

He also plans to travel overseas and within Malaysia more often with close friends, who he fondly refers to as his “travel buddies”.

Meanwhile, Prof Chuah will continue to contribute his services in the fund-raising efforts of the UTAR Kampar Hospital and provide his advice on the development of the UTAR Hospital.

“I will be chairperson of the planning and development committee and be involved in fundraising.

“A lot of funds are needed for this hospital which is going to be run in the same way UTAR is run - not for profit and self-sustained. Our hospital is private but prices will be affordable. It is unique because patients can opt for Western, Chinese and Ayurvedic treatments,” he points out.

He will also be keeping himself busy with “international business” as he has been appointed as chairman of the Federation of Engineering Institutions of Asia and the Pacific’s (FEIAP) standing committee on engineering education.

“There’s lots to do! I have been asked to help Myanmar set up its engineering accreditation system which I have been involved in since 2009. I am also going to help Cambodia, Nigeria, Rwanda and a few other countries to do the same.”

Prof Chuah says he was able to carry out responsibilities without interference from political parties.

“Contrary to misconception, UTAR is run professionally by academics. No political party has ever pressured me to do anything or approached me to pass any student,” he says, adding that he is thankful and appreciative of the voluntary services put in by the institution’s Board of Trustees and Council.

One of his best memories involves the move to UTAR’s Sungai Long campus from its campuses in Petaling Jaya and Setapak, Kuala Lumpur from May to June, 2015.

“Our certificate of completion was delayed from Feb 18, 2015 to the middle of May. Classes were scheduled to start on June 8.

“We only had three weeks to move lab equipment, the 120,000 volumes of library books stored in 9,000 over boxes and other equipment from the other campuses.

“Everyone, even the fruit vendors outside the campus (in Sungai Long) believed that the opening will be delayed. But we managed to pull it off as a team despite the pressure,” he says.

Prof Chuah, who has a healthy habit of sleeping before 9.30pm and waking up automatically at 4.30am daily, was constantly on campus making sure everything was up to the mark.

“I remember on Friday, June 5, I walked down from the 10th floor, stopping at each floor to check on the air conditioning.

“When I reached the first floor, a student from the Student Representative Committee introduced himself and suggested that I take a week’s leave to rest.

“Their maturity and knowing that UTARians are united whenever there is an important issue really touched me,” he says.

Noting that UTAR was set up with a launching grant of RM50mil from Tun Dr Mahathir Mohamad during his first tenure as prime minister, he says the university is grateful for the generous donations from the public, government, businesses and corporations.

“UTAR receives a cheque of RM100 from someone who refused to reveal his identity. “We tracked the person down and discovered he was actually a retired government school teacher.

“Upon receiving his monthly pension, he would give RM100 consistently without telling his family members,” says the Penangite.

Simple, humble and wise are words often used to describe Prof Chuah who hopes that UTAR continues to be an “excellent university” in 10 years’ time while adhering to the institution’s six pillars namely Virtue and Morality; Knowledge and Intellect; Physical and Mental Health; Sociality and Humanitarianism; Aesthetics and Harmony; and Creativity and Innovation.

His advice is to do good whenever the opportunity presents itself.

“Carrying out good deeds no matter how small they are will add up collectively. Liow thanks M'sians for donations to TAR UC, says will help varsity continue its mission 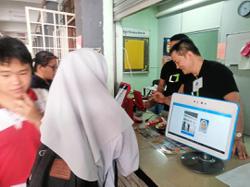 Green Packet aims to get 10,000 schools ready for reopening