Grades reviewed after lecturer gives A to all

A PROFESSOR’S attempt to give all of his students an A grade has received an F.

The Singapore Management University (SMU) had to review the grades for a module taken by 169 business students, most in their final year, after it found out that the lecturer, Prof Stefano Harney, had given all of them an A grade with the same numerical score.

SMU, which described the grades as “bogus”, said that this is the first time this has happened.

“The university has in place strict protocols with regard to grading and takes a serious view when protocols are not adhered to,” the spokesman added.

But Prof Harney defended himself. The Canadian, who was informed last month before the incident that his contract would not be renewed, said that he wanted to spare students the pressure to achieve high grades and did not want to “artificially” restrict the number of As through a bell curve.

Given that he was due to leave the school on June 30, this gave him “the opportunity to teach the course and grade it in the way I thought would be best pedagogically, without fearing the consequences from the school”.

The 57-year-old, who graduated from Harvard University and has a doctorate from Cambridge University, has been at SMU since 2012, and is the professor of strategic management at its Lee Kong Chian School of Business.

He taught and graded a module called “The Capstone: Studying Business Through the Classics”, which involved two essays that made up 40 percent of the grade and a video project which made up the rest.

Generally offered in the fourth year, the module helps students see connections between humanities, for instance works by Karl Marx and Sigmund Freud, and business.

But when students across his four classes got their grades earlier this month, the grade for Prof Harney’s module was missing.

A few days later, SMU notified them it was recalculating their grades. A senior professor who “taught the same version of capstone right from the very start” was called in to help with the re-grading.

SMU associate dean for undergraduate programmes Michelle Lee explained in an e-mail to students: “There is no variation to the scores he (Harney) assigned, even though the variation in quality of work submitted is plain to see.”

Each student could choose whether to keep the adjusted grade or have “pass” reflected on the transcript. The latter option would not impact their grade point average. SMU would not reveal how many students received a grade lower than the initial A.

The SMU spokesman said that while the university does not use a bell curve, there are guidelines for faculty members to refer to when grading. This is to ensure “fairness and consistency”.

Prof Harney said the guidelines “are really rules - that no matter how many students do well, the number of As is strictly limited to a third of the class”. And “artificially restricting their grades on a bell curve” was not his style of teaching, he added.

“These are fake ways to make your course seem serious. The real way is through deep engagement with the materials, ideas and ourselves,” he said.

SMU students said he was well-liked and was known to be “chill”, or laid-back.

A 23-year-old student who declined to be named, said: “In the first class we attended, Prof Harney said he believes that all students should be able to get an A if they put in hard work, and he feels that it shouldn’t be a competition.”

The undergraduate was given a B+ after the adjustment, and chose to retain the grade. - The Straits Times/Asia News Network 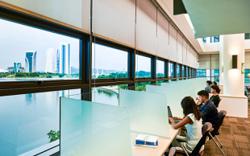