Nothing scary about learning English

TWO groups of people decided to do what they can to help students master the English language.

It cannot be denied that the language, like any other foreign tongue can be hard to learn, especially for children living in communities where English is barely spoken.

The Education Ministry is doing its part by implementing various methods such as the Highly Immersive Programme, where students are exposed to the language during co-curricular activities.

But this may not be enough as Abdul Qayuum Jumadi says that these students find learning English to be intimidating.

So how did he put these students at ease?

Abdul Qayuum decided to set up Englishjer with a group of friends who want to make sure students can learn English in a “friendly” manner without feeling scared or enbarrassed when they ask questions or want to clarify anything that is not clear to them.

To do so, he came up with the idea of teaching English using Bahasa Malaysia. 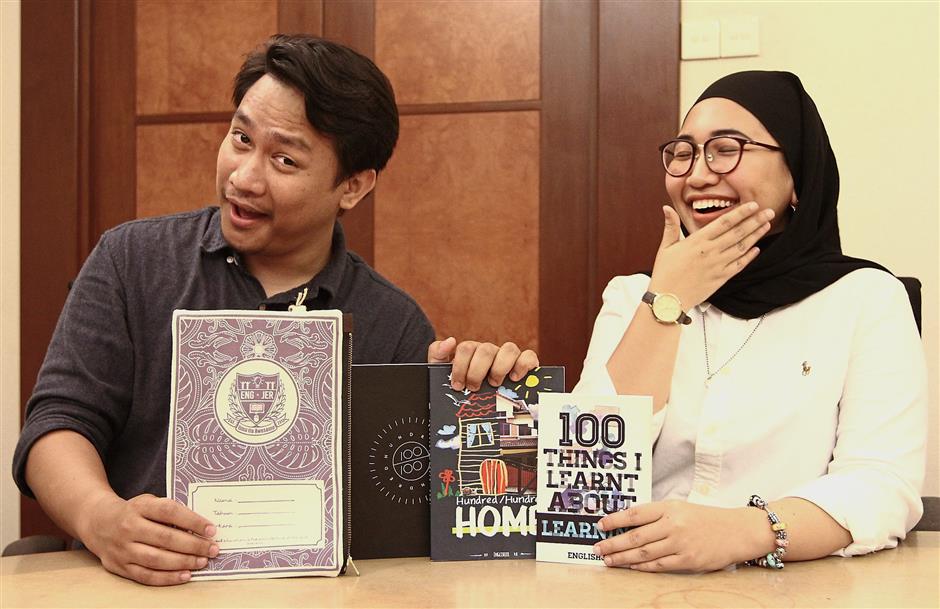 (From left) Abdul Qayyum and Nik Hanies speak enthusiastically about Englishjer and the satisfaction they gain in carrying out the work.

Although his method was not well received by some parties, it has proven effective for the students.

He says he wanted to help the children to conquer their unease in using and learning the language as he also came across fellow students at his university who were struggling with communicating in English.

Abdul Qayuum who is the creative head of the social enterprise, felt that if some of the university students could barely speak English, those in school might also be in the same boat, particularly those from rural or underserved areas.

In fact, they consider their initiative as a way to “socialise English for all Malaysians.”

Englishjer uses an unconventional method, which is to teach English using Bahasa Malaysia.

“You must not be shy when breaking some rules,” says Abdul Qayuum as their concern is to make sure the learners feel comfortable with the language.

“We use colloquial language to make it less intimidating by stressing that someone does not have to be at a certain ‘level’ to speak English.”

He adds that to avoid scaring the language newbies, “we have to go down to their level.” The participants of Englishjers camps pick up English language skills in unconventional ways.

“We make it relatable to them so that they want to learn English,” chips in Nik Hanies.

“We try to speak in Bahasa Malaysia because when they want to ask stuff it’s easier for them.

“They would ask us “hei, apa maksud..”, they can’t even string that sentence in proper English. So if we insist on using English with them, it will be like pushing them away or creating a barrier between us,” explains Abdul Qayuum.

“If that (using Bahasa Malaysia) is the way to help them understand the language better, then why not?” adds Nik Hanies.

Abdul Qayuum says that their method does draw criticism but “for the most part, it works for the people we target.”

Englishjer, he continues, aims to create a better ecosystem of learning English in Malaysia through creative modules and empowering learners and teachers.

“We started with a simple philosophy which is to make English not intimidating, but friendly and approachable,” he says.

“It started out just to share knowledge, a little bit here and there and then it became something huge,” he says, adding that they soon gained a celebrity and social media influencer following.

They do not make any profit from running their programmes, says Abdul Qayuum, adding that each member has a full-time job. As an example, he runs his own creative agency while Nik Hanies is a tutor.

“It is the satisfaction we find in working on Englishjer together.

“Seeing how the students change over time and knowing that we provided them with the opportunity to grow,” adds Nik Hanies.

The team has developed a “human connection” among themselves and with their participants.

“It’s that important factor that makes me ‘want to come back again and again’,” she shares.

As for Abdul Qayuum, it is a sense of fulfilment when he finds out that the participants have grown in confidence after attending their events.

“We have had campers who have gone out and done Ted Talks, even some camp participants who have published books.

“We’ve had campers who say they have gotten good jobs because we have helped them with their speaking abilities,” he adds with a proud smile on his face. 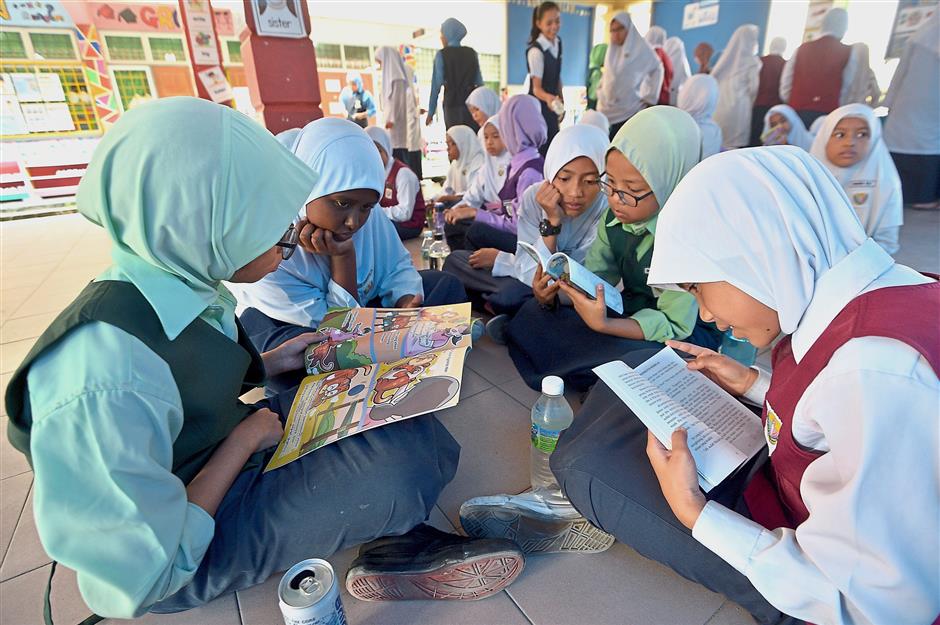 It may have been the “after effects” of having been a part of Teach For Malaysia (TFM) but the four co-founders of MyReaders felt a calling to teach English to students who have not received much exposure to the language.

Alex says the idea for MyReaders first came about when he and Ding were teaching in SMK Tunku Ismail, Sg Petani, in 2013.

Co-founder Tay says MyReaders was formed in 2014 by Alex and Ding a year after they came up with the idea.

She adds that they used to conduct extra English classes on Saturdays for the students.

“We tried to find suitable materials for our students but most of the materials were written in the American or British context.

“Therefore we read, researched and decided to write our own books for our students,” she explains. 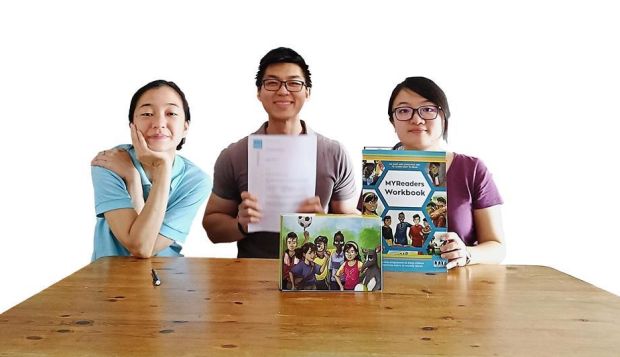 (From left) Charis, Alex and Tay with some of the MyReaders’ learning materials they developed.

Both the TFM fellows noticed that some of the students with disciplinary problems tended to be illiterate.

“They were unable to take part in class. They could not make sense of what was written on the whiteboard let alone enunciate,” he says.

In fact, Alex says there was a Form Five student who could not tell the spelling difference between “rice” and “rich”.

“We also realised that these kids have very limited patience and low grit.”

He says that in MyReaders, the team had to come up with a way of teaching English that could be immediately applicable in the daily lives of these students.

“To be honest, learning English can be quite intimidating,” he says, adding that this is also because these students come from disadvantaged backgrounds.

He says that this includes the fact that they are growing up in a “volatile environment”.

“They can’t really be certain about what to expect as they may not have enough food or maybe there is no shelter for the following days.

“Because of that, it affects the way they learn as well, their psyche and what kind of mindset they bring to school,” he adds.

“I think what is really deep in the hearts of all four of us is that we believe education is able to empower underserved communities to get out of whatever they are at,” Lim explains.

“So if English is able to help them get a better job, grant them greater access to scholarships, then we’re going to help them change their lives.”

There is a common concern among local English teachers that the teaching of the language is not prioritised in schools.

“English language also has this reputation of being bahasa penjajah (colonial language),” he adds.

Alex says that they have to change this mindset.

“Yes, it is the language of the British but at the same time, this language is going to give them access to the world.

“We tell them that it is going to help them get a better job, secure a brighter future and be able to give their parents a good retirement.

“One of the main ways to achieve that is by having jobs with better income, and mastering English is key to that,” he adds.

In a way, the team provide indirect career counselling as well when they explain to the students different jobs and their expected incomes.

One of the schools running the programme is located in an urban area within the Klang Valley.

Alex says that it is ironic that a school so close to urban Damansara could have pupils who are not well-versed in the English language.

“They seem to not be using English in their daily lives and we can see this from how they perform in our diagnostic test,” he explains.

He says that the MyReaders programme gives the students a clear and easy way to learn English with a progression plan laid out for them.

They have so far helped more than 4,000 students improve their English literacy skills, with an average of two years of reading growth through remedial reading programmes.

One of their biggest challenges is getting parents to be wholly invested in this initiative.

“It is not often the case where we share the same level of enthusiasm in getting the kids from illiteracy to being able to read independently,” shares Alex.

Another school that has benefited from the MyReaders programme is SMK Bandar Baru Ampang.

School principal Ibrahim Ishak says the programme has provided the students with the reading skill set needed to set them up for academic achievement.

He describes the students’ command of the language as “average”.

“Based on last year’s report, the reading ability of participating students grew by 47% and they were able to recognise more words while reading at the end of the programme,” he adds.

“We are improving but there is still a lot to improve on.”

He says that corporate volunteers have been coming to the school since last year to carry out the MyReaders programme with 20 students from Remove, Forms One, Two and Four classes.

Ibrahim says he is grateful for the effort and time put in by the volunteers and MyReaders.

“It is important for the students to master this language.”

Although working on MyReaders can take up a large chunk of their time, all four co-founders find great satisfaction in helping out the children.

“When we see a child who has gone through the programme pick up the skill of reading, we find that their confidence levels soar. It is as though the barrier that prevented them from learning had been broken down,” says Tay.

“Our hope is that the child is then able to catch up with his or her peers. If all illiterate children are given this intervention, we will have opened up their doors to greater opportunities, opportunities that would have been out of their reach if they were to remain illiterate,” she says.