The woes of vape

While adults claim that e-cigs are helping them quit smoking, researchers worry that it could draw children to the habit

THE good news is that smoking among children is dropping.

The bad news is that e-cigs and vape could disrupt the positive pattern.

While they may not be regular users, the mere fact that they are experimenting with e-cigs, is worrying.

Dr Vasiljevic is the principal investigator of a study on e-cig ads and children’s perceptions of tobacco smoking harms. Published in July, the paper warns that e-cigs could disrupt the trend of smoking decline among children as kids exposed to glamorous e-cig ads, perceive occasional smoking as less harmful. This may lead to more positive attitudes towards smoking and the tobacco industry.

Prof Dame Theresa Marteau, Cambridge Behaviour and Health Research Unit director and the paper’s co-author, believes their experiment is the only one showing how the appeal of tobacco smoking is increased among kids exposed to e-cig ads.

“We see a softening of attitudes towards tobacco smoking harms, and risks. That’s a concern. So if that’s your definition of ‘renormalising smoking’, than yes, that’s happening.”

While e-cigs are less harmful and hold great potential as a cessation tool, the gateway risk is under studied, and warrants further investigation, she feels. She says e-cig companies are consciously targeting children with the flavours they’re putting out.

“E-cig companies are taking their cue from the tobacco, alcohol, and sugary drinks industries. That’s how you sell products. Flavours like bubblegum, chocolate milk, and vanilla ice cream, explicitly target children. If you’re talking about cessation, you shouldn’t have flavours that children would like - what’s the point? Such flavours should be banned to protect children.”

In the old tobacco marketing campaigns, all the cool kids smoke, says Dr Vasiljevic. Now it’s vape. Many researchers and public health practitioners are concerned about the gateway hypothesis where addiction to the nicotine in e-cigs might lead people to tobacco cigarettes.

Dr Vasiljevic, who was involved in other experimental studies looking at the impact of e-cig advertising amongst children, found that e-cigs were being advertised similarly to how cigarettes were advertised in the 1950s and 1960s.

“You can’t do that with tobacco cigarette advertising anymore due to legislative restrictions but children were clearly the main entry points into the consumer market for conventional tobacco cigarettes.

“Our concern is that ads portraying e-cigs as glamorous, and healthier than tobacco, may be a contributing factor for children to start using tobacco.

“Kids may think vaping is good, it’s a gadget for the future, and it’s safe even though there’s nicotine. So these cool and glamorous ads may be resurrecting old smoking norms.

“If e-cigs are intended only for smoking cessation, then it would make sense to advertise them as a medicinal product. Tighter controls on marketing materials may be needed,” says Dr Vasiljevic.

On the reason for her focus on e-cigs and children, Prof Marteau says it’s because smoking rates - particularly in high income countries - are going down. This means that adults are stopping smoking. So, from a public health perspective, there’s a need to prevent children from starting. Fewer children are using tobacco in the UK and elsewhere, and e-cigs are threatening the progress in tobacco control policies, she says.

But the fact that tobacco prevalence among children has gone down dramatically at a time where e-cig experimentation has risen, says Paul Aveyard, Professor of Behavioural Medicine at the University of Oxford, implies that whatever gateway there is, is very small.

You can’t have both trains going in opposite directions and saying: ‘Oh it’s luring lots of people into smoking’, Prof Aveyard who is also the senior editor of the journal Addiction, and coordinating editor of the Cochrane Tobacco Addiction Group, argues.

An alternative way of looking at it, he says, is to ask why young people smoke.

“It’s the rebels - the kids who are unengaged with school, and those whose social identities are other than hardworking. Maybe e-cigs are just taking the place of cigarettes. We don’t know that anymore than we know whether e-cigs are a gateway to smoking or whether e-cigs have driven down the prevalence of smoking in young people. It’s all speculative at this point.

“I don’t want kids exposed to e-cig ads to perceive smoking as less harmful than it is, but this has to do with better ad regulations.”

In Malaysia, the Health Ministry defines devices that contain nicotine as e-cig, and those without as vape, or vaping.

The ministry’s deputy director-general (public health) Datuk Dr Chong Chee Kheong says e-cigs with nicotine are regulated under the Poison Act 1952. Nicotine is grouped under Group C Poisons and cannot be sold or supplied by retailer to any person except as dispensed medicine or an ingredient of a dispensed medicine.

“E-cigs without nicotine is not controlled under any law - for now.”

It’s worrying, he says, that ads for non-nicotine liquids or vape, are not banned on social media and the Internet.

“While e-cigs containing nicotine are banned, when it’s advertised online, we don’t know whether it’s really nicotine-free because you cannot tell from the physical look of the liquids.”

Juul which mimics the nicotine hit of a real cigarette, has popped up in schools across the US, sparking concern among parents, educators and regulators.

‘Juuling’ refers to the recreational use of the device which resembles USB drives.

The sale of fruit and candy flavours in convenience stores and gas stations, has been banned by the US Food and Drug Administration (FDA) to counter a surge in teenage use of e-cigs by more than 75% since last year. The FDA will also introduce stricter age-verification requirements for online sales of e-cigs, Reuters recently reported.

Subbarow fears that children and adolescents who see ‘Juuling’ clips on YouTube, will be tempted to try the fad.

“Curiosity gets the better of them and they pick up an e-cig even though they have never smoked before. That’s dangerous.”

E-cigs used to be huge but now the latest in the market is a flat, and sleek version that fits into the pocket, Dr Mohamad Haniki, who is the National E-cigarette Survey (NECS) 2016 principal investigator, says.

“That’s gaining popularity locally so parents must be vigilant,” he says, adding that the Tobacco and E-cigarette Survey among Malaysian Adolescents 2016 (Tecma) revealed that more young girls are experimenting with e-cigs for the first time as compared to cigarettes but only 22% of adolescents surveyed said the liquid did not contain nicotine. 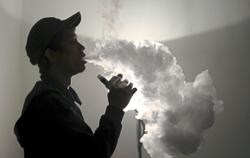 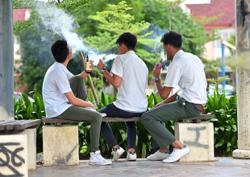 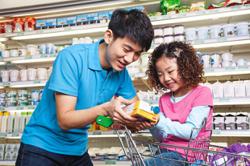