Thrills, spills and plenty of action

(From left) One for the album as Abram, Wei Jack, Alanna, Nur Shahirah, Wai See, Zhi Ling, Jasvina and Nur Denneia mark their win with two of the main characters from The Smurfs Live on Stage musical.

Eight worthy winners of a nationwide contest journeyed up 6,000 feet above sea level for a rewarding highland holiday.

“READY, set, go!” With a tug from the attendant, Abram Varughese Kurian’s snow tube slid down the snow-covered chute. As it gained momentum, and spun and swirled, Abram’s grin grew wider.

It was bitingly cold but that did not stop the 18-year-old from recording his much-anticipated ride. The budding vlogger was determined to capture his maiden snow tubing experience on video.

Behind him, Lee Wai See gritted her teeth as she battled the subzero temperatures and readied herself for her turn. It had been a long time coming.

As a child, she had stood outside the winter wonderland, peering in to watch other holidaymakers dressed in warm clothing have a ball of a time.

Now, the 20-year-old finally had the chance to get a slice of the action herself. There was no mistaking the look of triumph in her eyes as she tobogganed down the slope in style.

Even though they were decked out in green and maroon winter jackets, gloves and boots, Abram and Wai See had not travelled outside the country. Instead, they had made a trip 6,000 feet above sea level to SnowWorld, an indoor attraction in Genting Highlands. The group, with Chan (right), pose by the National Geographic-esque yellow rectangle frame at the Awana Bio Park.

Together with six other students, Abram and Wai See had been treated to a three-day, two-night stay at First World Hotel, sponsored by Resorts World Genting (RWG).

Their all-expenses-paid stay came with a fun-filled itinerary, which saw them lapping up the spectacular sights and sounds at the City of Entertainment, and getting acquainted with its 130-million-year-old forest.

The trip, organised during the recent school holidays, was a reward for the eight runners-up in The Star’s Newspaper-in-Education (NiE) contest last year.

Dubbed Making a Difference (MAD), the contest called on secondary school students nationwide to put themselves in the shoes of photojournalists and to capture altruistic teenagers or young adults in action.

Each participant was required to produce a photograph relevant to the theme, with a 150-word write-up on the featured youth and how his effort was creating social change.

Launched in March, 2017, the competition had ended in September at the grand finals held in Menara Star in Petaling Jaya, Selangor. The boys and girls transform into giant and mini versions of themselves at the Ripley’s Believe It or Not Odditorium.

Wai See, along with Jasvina Jayani Sanyasi Jeyaretnam and Nur Shahirah Mohammad Rashid, had been among the eight finalists competing against each other at the hands-on challenge in Menara Star.

In the end, five of the finalists won the grand prize, which was a six-day, four-night trip to South Korea, sponsored by Star Media Group.

Wai See, Jasvina and Nur Shahirah walked away with the runners-up prize, in addition to bagging a Coolpix W100 camera each, courtesy of Nikon Malaysia.

Although the other five runners-up – Abram, Au Wei Jack, Nur Denneia Shuhaeila A. Kamarudin, Koh Zhi Ling and Alanna Jane Yap Wei Shan – had not made it as finalists last year, they had been seated in the audience, watching the final challenge unfold.

That all of them had emerged second-place winners was a feat in itself as they had outshone over 2,000 participants.

If they had felt any anxiety or awkwardness travelling together, it soon dissipated as they got into the groove of things up in the “resort in the clouds”.

Having each had a go at snow tubing, the group made their way to the Genting Bowl where they rolled up their sleeves and gave their muscles some workout.

They were momentarily transfixed when at 6pm, the lights dimmed and the 28-lane bowling centre was bathed in a luminous neon glow. Thus began their glow-in-the-dark bowling experience. The getaway to Genting Highlands was a visit of many firsts for the students. For Nur Shahirah, Nur Denneia and Jasvina, it was even more memorable as they were first-time visitors to a place that has long been a household name in Malaysia.

While the others had set foot in the popular hill resort, they had not fully explored its many newly-installed attractions. Hence, it was no surprise that they stood awestruck at the atrium of the SkyAvenue mall when Ocean Groove with Maestro Ning came to life on giant LED screens.

Developed by Genting Studios, the animated musical – featuring a sea turtle commanding an orchestra made up of underwater creatures – was part of the SkySymphony series of free performances for the public.

The SkySymphony attraction drew in crowds every half an hour as the atrium lit up with vibrant audio and visuals emanating from the LED screens.

Adding sizzle to the stunning showcase was the 3D transformation of the 1,001 winch balls hanging from the four-storey high ceiling. As if by magic, the plastic globes took on numerous shapes in varying hues.

Alanna was deeply impressed with the whole experience.

“It took my breath away,” said the 17-year-old. “Being an animal lover, seeing all the sea creatures float down in colourful balls of light was simply amazing, especially since their movements were fluid and smooth. That was really a ‘cool’ feature!” Jasvina is brave indeed as she hugs a life-size dinosaur model at the Jurassic Research Centre.

Another strong favourite among Alanna and her travel mates during their holiday at RWG was The Smurfs Live on Stage musical at the Genting International Showroom.

Most of them had not experienced a live stage performance, so it was a 90-minute treat they savoured thoroughly. What’s more, they even got to pose for a photograph with two of the main characters.

“When I was a kid, I watched TV shows like Thomas & Friends, Sesame Street and The Smurfs. I would tell my dad, ‘Please bring me to watch a live performance!’ Now I’m 18, I finally got the chance to do it,” said Abram with a smile.

From the bizarre to the breathtaking

Playtime and musicals aside, the students’ RWG holiday served up fantastical tours, as well.

At the Jurassic Research Centre, the students came face to face with terror-inducing prehistoric predators such as the Tyrannosaurus rex whose beastly instincts were on full display, thanks to modern animatronics technology.

The monstrous carnivores eyed the “trespassers” menacingly, baring their fangs and emitting growls and bellows, almost as if they were ready to pounce on their prey. So real were the effects that a child was seen bursting into sobs and had to be comforted by his father.

But it was a welcome paradise for the students, especially Jasvina, who has taken a keen interest in dinosaurs. 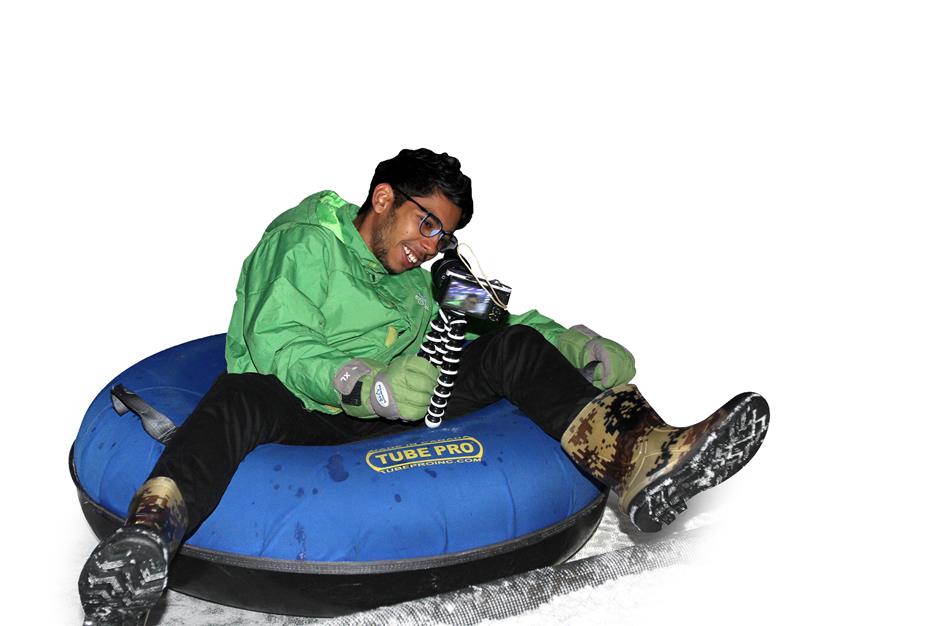 Abram smiles into his smartphone as he records his snow tubing ride.

“It’s nice to see them, and get to touch and feel them,” said the 18-year-old, adding that the information panels provided her with insights into each species.

Their next stop was the Ripley’s Believe It or Not! Odditorium where there was not a nook or cranny that the students spared in their eagerness to take in all the wide-ranging oddities.

Among the exhibits that piqued Wei Jack’s interest was a mirror with a plaque asking visitors to try out different ways of rolling their tongues.

Unbeknownst to him, it was a two-way mirror, which meant that as he was straining to complete his tongue twisting attempts, he was exposing himself to visitors on the other side of the divide.

“I think I embarrassed myself,” said the 20-year-old with a grimace.

Jasvina, too, was attracted to the mirror but she was thankful she didn’t fall for it.

“I made a round and turned back, and saw that it was a see-through mirror. I could see other people rolling their tongues. I’m so glad I didn’t do it. I had a hunch that the mirror wasn’t right,” she said, laughing.

If you think that the teenagers were only going to stay indoors, think again!

No trip to the highlands would be complete without a ride on the Awana SkyWay. That is where you could breathe in crisp mountain air while enjoying a bird’s eye view of the surrounding landscape.

There was not a sound on the gondola where the group sat huddled, their full attention on the picturesque view of the city skyline, the lush greenery of the rainforest below, and the bright colours of the Chin Swee Temple.

“A tree is special because of its shape and properties. In simple terms, the aglaia trees are special because they have sap inside which makes them waterproof. That’s why they can be made into boats. But when the aglaia cracks, it fractures like a bone and its sap spills out like blood. When it leaks underneath the tree trunk and is protected from the elements, you get kemenyan or frankincense,” said nature conservationist Eddie Chan.

That was just one of many take-away points that the students gained from their tour of the conservation trail in the Awana Bio Park – a small part of the highlands’ 130-million-year-old forest.

They also got to see for themselves some of the plant and tree species that they had only heard or read about such as the pitcher plants and the strangler fig trees.

Chan’s passion for the natural environment seemed to have rubbed off on the students.

“He really opened my eyes to how we should conserve the forest. He had many interesting things to say. I wish our jungle trekking had gone on longer,” said Alanna.

As their three-day outing came to an end, Wai See looked back on the time spent with her travelling companions with immense gratitude.

She was especially thankful for having had the rare opportunity to make new friends and to practise speaking the English language.

“Alanna is good at expressing herself in English. The others, too. They made me realise that I need to improve my communication in the English language,” she said.

When the time came for farewells, everyone shook hands and embraced each other, knowing that they had a ton of photographs to remember their holiday by.

For Abram and Wei Jack, especially, they were counting down the days to the opening of the SkyTropolis indoor theme park and the 20th Century Fox World Theme Park.

The Star’s NiE contest is endorsed by the Education Ministry.

This year, Star-NiE’s Star Flicks contest requires teams of four to design a movie poster inspired by a real-life issue. They are also required to provide the plot summary of their movie and the message they wish to convey through their poster. The grand prize winners will be treated to a six-day, four-night holiday in South Korea, sponsored by Star Media Group. Two runner-up teams will be rewarded with a three-day, two-night stay at Genting Highlands, courtesy of RWG. Registration for the contest is now closed. For more information, visit http://contests.thestar.com.my/nie.