Machines taking over our jobs? Academics weigh in on the issue 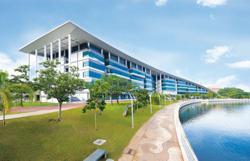 THE World Economic Forum’s warning that five million jobs could disappear in five years because of advances in technology sounds like robots are taking over the world.

In a report published early 2016, the WEF said that developments in artificial intelligence, robotics and biotechnology would disrupt the business world in a similar way to previous industrial revolutions, with administrative and white collar office jobs most at risk, according to a CNN report.

The effects of such “disruptive technology” – a term that refers to a product or service that starts at the bottom but moves up to displace established technology, shaking up the industry and in some cases creating new ones – was the topic of discussion at a roundtable hosted by EduCity in the southern Malaysian state of Johor on Nov 9.

New skill sets that are relevant in the Fourth Industrial Revolution were explored at the forum, as it looked at how disruptive technology has impacted the higher education industry and traditional fields like law, medicine, science, business, finance, accounting and construction.

“When computers came, people said it would run the world and we’d be out of jobs. But computers have created more jobs instead,” he says.

Prof Smith says that quantum computing and quantum technologies will transform what we do in the future, and “we are at an early stage of a revolution to create new companies and new industries.”

The consensus among the roundtable panellists is that adaptability and resilience are key attributes a fresh graduate should possess in order to forge successful careers in a rapidly-changing world where disruptive technology constantly influences how things are done.

“Skills that they use immediately after leaving university may be redundant further down their careers,” says Prof Downes. “What’s essential is for graduates to have an ability to continue to learn. This will be key to their success in the future.”

Because globalisation and technological development are realities of life, Dr Syed Ahmad says “we should not resist or reject them, but manoeuvre around them to get the best advantage.”

Sharing his observations from the construction industry today, Khairil says innovations and technology are being harnessed to address some of the disruptive developments taking place. He cites the shortage of skilled workers which has compelled the industry to automate certain functions and processes, resulting in industrialised building systems that depend less on on-site work.

In the field of medicine, Prof Barton says that it is all digital. "Many will see its impact on medicine as a positive one, for it facilitated quicker and better healthcare. It enables rather than disrupts," he says.

Wrapping up the discussion, Goh says it’s for graduates to decide how they want to see emerging technologies – as disrupters or enablers. But the education system must empower them with skills such as adaptability, rapidity, stamina, design thinking and resilience, so that graduates are better equipped to embrace opportunities that emerging technologies bring, she says.


This article is brought to you by EduCity.