The Star Education Fair is back!

Representatives of the varous institutions selecting the location of their booths at the fairs balloting session in Menara Star.

THERE will be options aplenty for school leavers looking to pursue their studies at the Star Education Fair to be held in Penang and Kuala Lumpur.

About 100 exhibitors have already booked their booths during a balloting session held at Menara Star on Wednesday. The exhibitors are mainly local and international institutions offering diploma, degree and post graduate courses.

The fair in Penang will be held at Convention 33, Prangin Mall, on Dec 9 and 10, while the KL fair at Exhibition Halls One to Five, Kuala Lumpur Convention Centre (KLCC), is on Jan 6 and 7. Admission is free and the opening hours are from 11am to 7pm at both venues.

Apart from gathering information on various courses from the institutions, visitors can also look forward to benefiting from talks on education and career-related topics during the fair. 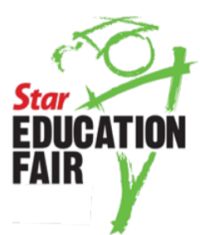 The exhibitors had gathered at Menara Star last week to vie for the most strategic spots for their booths at both the venues.

The biggest exhibitors at KLCC will be Limkokwing University of Creative Technology with 18 booths. The Penang Medical College (PMC) and Education In Ireland, would between them have 18 booths.

PMC marketing communications executive Lavaniah Kumaraysun said, they have been pleased with the number of “high quality students” that the fair has been attracting. There will be professors present to provide information on the courses offered, as well as scholarship and bursary opportunities, she added.

Education in Ireland Malaysia education consultant Cormac Kavanagh said there will be eight higher education institutions from Ireland represented at the fair.

“Representatives from the institutions will be on hand to provide one-on-one consultations and to provide information to visitors,” he added.

Foodies and potential culinary wizards can stop by HELP University’s booth where it will have ongoing cooking demonstrations. Vistors will be treated to some scrumptious food samples.

Its marketing executive Daryl Chew Roy Way said the psychology and business courses tend to receive many enquiries during the fair.

The varsity has been a supporter for almost 10 years and will be taking up 16 booths at the Kuala Lumpur fair.

“Recently, we launched the APU eSports Malaysia Academy,” she said, adding that it is bound to be a “hit” with the crowd.

University of Nottingham Malaysia Campus marketing executive Najib Sahari said the lecturers will also be on hand to offer advice to potential students and their parents.

He added that the strategic location of the fair, which is easily accessible by public transport, is one of the reasons that the British university has been taking part in the fair.

Quest International University Perak Student Recruitment Division senior manager Thirukumaran Arumugam said that school-leavers who have their complete results can register on the spot at its booth during the fair.

They might even be offered a scholarship immediately, he said adding that there will be no interview involved if the potential student meets the scholarship requirements.

At the end of the balloting session, there was a special draw where some exhibitors took back great prizes.