Scientist in the making 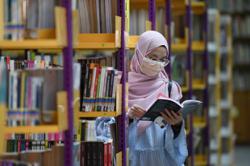 Christine (centre) together with her parents Pauline Chai and Christopher Ling Siew Ming, showing off the medal, certificate and iPad that she won.

WHO knew that randomly browsing the Internet could lead to winning an international science competition?

Certainly not 17-year-old Christine Ling Chun Hui, who was a winner of the 2016 Molecular Frontiers Inquiry Prize last year.

She says she was originally just going through websites looking for fun scientific facts when she stumbled across the competition’s webpage.

Organised by the Molecular Frontiers Foundation in Sweden, it is the world’s first prize requiring participants to think of a question rather than figure out the answer.

It aims to recognise the critical role of curiosity in the scientific process as well as the value of skilled inquisitiveness in all aspects of modern life.

Christine says her winning question was “Abalone shell, from calcium carbonate, is many times stronger than chalk because of its structure. How can we manipulate the structure of particles at nanoscale to produce a stronger material?”

In layman’s terms, she explains that this means learning the chemical and physical structure of calcium carbonate found in these shells, then manipulating building materials using nanotechnology to make them even stronger.

“I learnt about the strength of abalone shells and I wondered how we can use nanotechnology to produce stronger building materials that can withstand the impact of tsunamis and earthquakes,” she adds.

The science enthusiast says there’s a protein layer between the “calcium carbonate bricks” that make up the shell, and this is what makes it strong as the protein helps absorb the impact when the shell is hit.

“This keeps the shell from breaking.”

Her interest in nanotechnology and chemistry structure piqued when she attended a science camp early last year.

She says she drew inspiration for her “question” after listening to lectures on those topics at that camp.

“I just had to fill in an online form with my three questions and provide some supporting questions for them.”

Christine says that among the follow-up questions was “Why do you think this is an important question?”

“After performing a lot of research on this, why are you still curious about your question?” and “What impact would solving this question have on you, the community and the world?”

But, she adds, she isn’t required to directly answer her question.

“I like that this competition requires us to create a question instead of finding an answer,” she says, adding that coming up with questions was actually more challenging.

As luck would have it, Chrisine only submitted her winning question the day before the deadline.

The 10 winners of the annual competition were announced last October at the Molecular Frontiers Symposium at Tokyo University of Science in Japan.

Her win earned her a medal, a certificate and an iPad.

“I definitely enjoy the sciences and used to do my own experiments at home when I was younger,” she says.

Among her little experiments was creating a water fountain out of water bottles and straws.

“The experiment was based on the concept of water pressure.

“I see myself becoming a scientist one day, maybe even winning the Nobel prize.”