The need to fund higher education

The government should fund tertiary education to reach out to more citizens and ensure they have the necessary knowledge and skills to enter the workforce. This will in turn uplift the lot of its people.

EDUCATION was institutionalised to formalise the process of knowledge acquisition and research in man’s quest for understanding.

Some of the earliest universities in the history of mankind namely Al-Azhar (Egypt), Bologna and Naples (Italy), Palencia (Spain), Cambridge and Oxford (United Kingdom), all have one thing in common; they were built by notable early world civilisations as institutions of research, discourse, learning, proliferation of knowledge and documentation.

This contrasts largely from the role of universities today as institutions of human capital accreditation, qualification, and most unfortunately, business and profits.

A system that discriminates based on household economic ability, can and will cause an unhealthy imbalance in the quality of the resulting labour force and society. These form the basis of our argument.

In America, an individual has to get his own funds to pursue higher education, while many European countries have public-funded institutions of higher learning. The latter is the best for Malaysia.

Our societal and economic progression (or digression) does not depend on any one factor, but on the interaction of economic, social and political factors over a long period of time.

Let’s first look at some realities that we need to contend with to understand why the Malaysian government should fund higher education.

We can never truly measure the immense positive externalities derived from an educated society. Outcomes of university education and research continuously found the progress of mankind. In developing Malaysia, higher education is an impetus for establishing a civic-minded society, highly-skilled manpower and competitive value proposition for capital and production. There may be a cost involved as the government’s funding of tertiary eduction will inevitably be included in our taxes, but the consequences for failing to do so can be devastating.

In Malaysia, wage growth caught up with productivity growth up to the late 1990’s. Since 1996, we have been living in the “middle income trap”, stunted at the World Bank’s definition of upper middle income; neither high nor low income. In fact, for the past 10 years real wage growth has been negative. We have a largely unskilled labour force and this means they cannot move up the value chain and command higher salaries.

● Education is fundamental to a competitive value proposition

Another case for education is competitiveness for both foreign direct investment (FDI) and outputs. On the FDI side, our factors of production, in this case labour, needs to be attractive enough. On the output side, our goal to move away from producing lower-value manufacturing and primary goods into the higher-value services sector, have been held back by limited talent and capabilities. Lack of advanced education is one major factor causing this lack of competitiveness.

A study released by the Global Entrepreneurship Monitor (GEM) categorises Malaysia as an efficiency-driven economy, behind innovation-driven economies. We focus on improving existing processes, but we are not out there inventing new things where the big money is.

Focusing on the latter is extremely important now for Malaysia, because we can no longer offer very cheap labour, land and factories to produce mass generic products competitively. The number of researchers in Malaysia for one million people is only 365, behind Japan’s 5,416 and South Korea’s 4,231. We are in dire need of more trained professionals and innovators.

● Education is an investment

Like parents investing in their children’s future, the state must invest in its population for the future of the nation. An educated society will inevitably have a higher standard of living because of higher income, production of high value goods and services, longer life expectancy, subscription to civic and moral values, political stability, existence of civil liberties and openness to change and development. While highly developed nations like Denmark and the Netherlands invest 11.2% and 10.8% respectively of GDP in education, we invested only 4.8% last year.

Currently, about 80% of the bottom 40% income households are only-SPM qualified and below, while only 5% received higher education. The rest never made it to school at all.

The reason is crystal clear; it is education that can lift households into higher income thus significantly reducing poverty and its consequences. If this group were to receive higher education, it is the state that ultimately benefits as social capital is returned from the household to the state in increased production and tax income. Social justice is served; while nobody is left discriminated or neglected from being given an opportunity to develop his or her own merits.

Entertain this simple simulation: Consider a fresh graduate entering the workforce with a salary of RM2,500, working for 30 years with a modest increment of 5% a year. Upon retiring at the age of 55 years, he would have paid back at least RM290,000 to the government only in income taxes. Even after discounting, payback in taxes is significantly beyond the investment cost providing education.

● Education correlates with wealth and income

Tertiary-educated individuals have an average of RM182,000 in wealth to their name, while SPM holders have only an average RM82,000 in net worth. Degree holders have at least 2.2 times the wealth of SPM leavers. But the tertiary education penetration rate for Malaysia stands at only 36.5%. This is only measured at point of enrolment (not completion)! Not only we are significantly behind “very high human development” nations’ average of 75%, we are also behind “high human development” nations’ average of 50%. l Education will reduce income inequality

Malaysia ranks as the third most unequal nation in Asia, based on a GINI coefficient of 0.4621 (World Bank). Using only GINI, a simple measure of dispersion between the richest and poorest in an economy, we can already see that there are structural problems with the kind of growth that we have been enjoying. A household that earns RM10,000 monthly and above is already considered the top 4% Malaysian households! 60% of the highest-earning income households have at least one member that received tertiary-level education. But 60% of the lowest-earning households have only SPM-holders as their most qualified household member. Not coincidentally, only the top 20% income households in Malaysia have experienced substantial income growth. For the remaining 80% it has been moderate. The gap between the rich and poor has been consistently growing from year 1970 until today. Only non-discriminatory access to education for the bottom 40% will arrest the growth of this gap.

We expect free access to education to allow inter-generational mobility and narrow this inequality gap. If we let economic disability become a prohibitive factor for education, relatively poorer households will never be lifted out of the low-income bracket.

● One graduate for every Malaysian family

We need an education system that is inclusive, does not neglect academically-struggling yet vocationally-advantaged pupils, matches industry requirements, yet streams students into disciplines where they will excel most. Most importantly, the system must not allow students to find themselves at the point of entering the industry, handicapped with a student loan on their shoulders, only to realise that they are not employable.

Malaysia has progressed in many aspects by making primary and secondary education free. 100% of Malaysians finish at least Year Six and 68% finish Form Five. The current socio and economic condition in Malaysia now calls to make finishing Form Five legally compulsory, and providing free and accessible tertiary education for all.

I urge the government, non-governmental bodies, policy-makers, and lobby groups to move towards providing free tuition fees for higher education at all our public universities. Where public universities are unable to cater for all qualified students, perhaps the same quantum of funds should be provided to private universities in a staggered manner, so as to ensure that education is accessible to all.

I also propose that there should be at lest one graduate in each of the 6.4 million Malaysian households to ensure inter-generational mobility; that is for at least one child of a fisherman or low-salaried factory worker so as to uplift the entire family which will enable them to move on to the higher income bracket. A graduate in each family will be the change-agent who will ensure that his generation improves the lot of the family. Education is far too important for us to risk any mismanagement, oversight and underfunding. The generations that go through a robustly managed quality education system, will ultimately decide Malaysia’s direction and the society that we will live in. Only then can we fundamentally assure that all layers of society can enjoy a high income — not just the top 1%. Let us reflect what Nelson Mandela said for a better Malaysia! “Education is the most powerful weapon you can use to change the world.”

■ The writer is a professional who works in the oil and gas sector. He is pursuing a post-graduate doctorate and is the executive director of Teach For The Needs (TFTN). Data and figures in this article were derived from EPU, DOSM, HIS 2009, HDR 2011, World databank and BNM. For details, please refer to BLINDSPOT. (http://www.facebook.com/blindspot.msia) 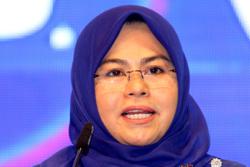