When it comes to careers, some have listened to their hearts and taken up unusual programmes, blazing the trail for others to follow.

HAVE you seen a person spinning plates on a stick?” asks veteran clown Sam Tee (aka Uncle Button). I shake my head and he proceeds to spin a plate on a stick. He makes me hold up a separate stick, passes the spinning plate unto my stick and grins excitedly: “Oh look, now you’re spinning a plate too!”

Within an hour, Tee has made me try on several red noses and walk about in oversized shoes, while he juggles circus rings and flick a hat from his foot to his head.

People like Tee have given up “normal” jobs to pursue their passion. 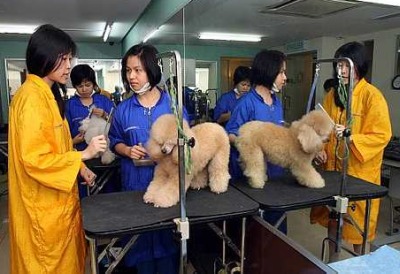 Master groomer Annie Goh (left) offering a student tips on how to best proceed with a “client”.

Not only have they taken up careers outside the mainstream, some have even gone on to set up schools to impart these skills to others who are interested. From grooming pets and spinning cars to sipping wine, there are now programmes for those who are brave enough to go beyond the norm.

Clowning on the job

Tee is one full-time clown who is serious about his job, which is “doing funny business”. He first ventured into this in 1995. Since then, he has gone on to clown schools, even getting a certificate from “Advanced Studies: The Performance Arts of Clowning” from the United States.

He now performs regularly in different countries around the world, from England to Kazakhstan.

Besides showing off his tricks at birthday parties, carnivals and launches, Tee also trains other clowns and provides them with supplies which he sources from the United States and other countries on his travels.

He conducts training programmes for organisations like Crisis Relief Services and Training. The training he conducts often have different objectives, ranging from instilling interest in reading among children to providing humour relief for disaster victims or hospital patients. 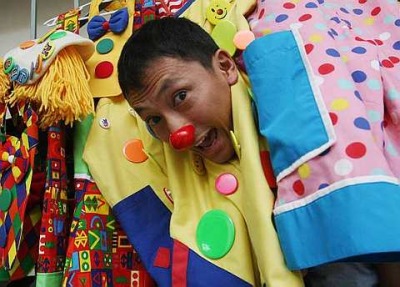 Tee, seen here with his clown costumes, is passionate about his business.

“Usually, my training sessions lasts for two or three days. I teach the participants basic concepts about clowning, make-up, interacting with people and working with balloons,” Tee says, adding that there are no age limits to his courses. His previous students were aged between seven and 102.

Interaction skills are very important, as clowns must learn to engage their audience, Tee says.

“Do you know clowns have a special way of giving out balloons? Their actions are usually exaggerated,” he quips.

“They also use other tricks like the spinning plate, to attract attention and get people to join in the fun.”

Auguste, Hobo and White-faced are all distinct in their own ways, and students have to decide on their own “face” and look. Even a simple action like “picking your nose” may be more complicated than most people think, says Tee.

“Proper clown noses and shoes can’t be found here; they are imported from the United States,” Tee says, stacking boxes of “noses” on the table. 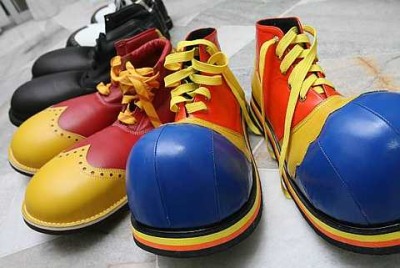 Clown shoes such as these are imported from the United States and can cost up to RM2,000 a pair.

“These ‘noses’ are moulds of human noses and come in at least 100 different sizes. They cost about RM85 each but last for years.

“However, many clowns come back to buy new noses from me because of ‘running noses’ (they lose the noses).”

A complete clown costume can cost at least RM3,500 but usually, the investment can be recovered after several performances.

According to Tee, clowns used to charge about RM600 per party but now some just charge RM250 and walk around in their costumes, twisting balloons.

Others may work for companies on a contract basis, and earn between RM2,000 and RM3,000 a month.

But what keeps Tee motivated is his desire to help others as he frequently performs for community events and trains those who want to clown for this purpose.

Of wine and the fine life

If clowning around is not your cup of tea, how about a glass of wine?

“One of the first things you learn in wine tasting is recognising the aroma,” says HTC in Asia Sdn Bhd director of research and development and consultant trainer, Bruno Casassus, as he opens an aroma bottle for me. 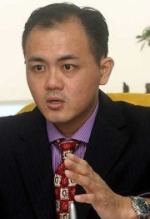 “Take this for instance, can you smell the strawberry scent?”

Casassus is an instructor for HTC’s sommelier programme, which is a six-day course comprising three modules, held over a span of three months.

It is attended by those working in the hospitality and food and beverage industries as well as wine aficionados.

“During the course, we taste about six to 10 wines everyday,” Casassus explains.

“For me, to ‘feel’ the wine is important.

“I believe wine is to be enjoyed as wine and pleasure are intimately related.”

In the first module, participants learn about the rules and regulations of wine making €“ yes, wines can be governed by law, especially Old World wines produced in France, Italy, Spain and Portugal.

“In France, you need to use certain methods and ingredients to achieve an appellation, and these are written out clearly,” Casassus explains.

“For example, Pauillac wines must be made from grapes in the village of Pauillac. If you use other grapes and call it Pauillac wine, you can be sued or jailed.”

Participants will also be exposed to wine-tasting techniques, and learn about the differences between wines of various countries, wine storage, and food and wine pairings.

Casassus admits that he tailors his courses to the local environment and market.

“I won’t teach about New World wines in France because the French are very proud of their wines,” he says.

“But in Malaysia, I have to talk about temperature and a larger diaspora of wines.” 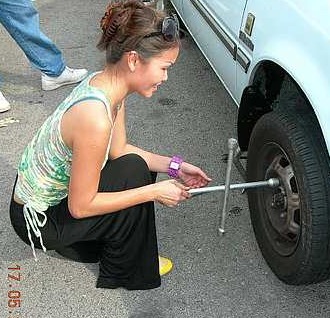 Learning how to change car tires is part and parcel of the SmartWoman Driving Coursetaught by Asia Advanced Driving Academy.

He also conducts training for hotels and wine importers who want to know how to serve, display and sell wines.

However, although one can get a sommelier certificate by attending his course, that does not make one a professional wine taster.

“You don’t become a sommelier in six days,” says Casassus, explaining that he had practically grown up with wine, after first tasting it as a toddler.

“You need years of experience and exposure in the restaurant and service industry to give you the much needed practice.”

Oh, for that adrenaline rush

For those who love cars, the Asia Advanced Driving Academy’s (AADA) website offers an interesting plethora of programmes, including one on chauffeur etiquette, SmartWoman driving and anti-terrorist driving.

Kenvin Low, a car racer and AADA chief instructor trained in Australia and the United Kingdom, believes that many people do not really know how to drive to save their lives.

A popular course is “defensive driving”, which he says is about “managing the space surrounding you to avoid accidents and taking precautions.”

They do “slalom” exercises, which requires weaving in and out of a line of cones, and “accident avoidance” exercises, where they have to avoid hitting a cone on a road that is slippery with water and oil. 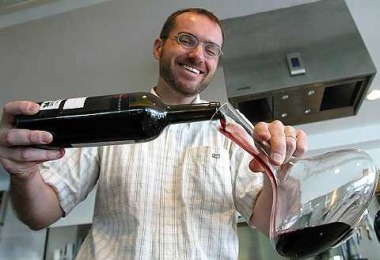 For ladies, the SmartWoman Driving Course incorporates all these but with extra tips catered for women.

“No high heels when driving because you may have problems in emergency braking. If you take your shoes off while driving, don’t leave them beneath your seat €” put them on the seat beside you,” says Low.

The Defensive Driving Course, which lasts for a day, costs RM400 while the Advanced Driving Course, tailored for above average or race drivers, is over two days and costs RM600.

Low says he hasn’t taught anyone stunt driving. However, he has taught precision and anti-terrorist driving to people like bodyguards who need to master skills such as the J-turn, reverse flick, and how to crash other cars in order to be ready for situations like hijacking or kidnapping.

And while Low admits that racing is not a lucrative career in Malaysia, being a good chauffeur has its rewards as a driver can earn between RM3,000 and RM8,000 a month, inclusive of tips.

If learning defensive driving in luxury cars strikes your fancy, BMW Malaysia has its own BMW Driver Training programme, where anyone can learn safe driving in an almost brand-new BMW 3 Series.

A one-day course costs RM1,700 but participants will get practical exercise on the Sepang International Circuit and learn how to how to handle a car in under- or over-steer situations, says driving instructor and BMW Club Malaysia president Wong Kah Keen.

“Many participants come in telling me they want to drive fast,” says Wong.

“But first, they need to learn how to handle the car.”

Both the AADA and BMW programmes have certificates that are recognised overseas, should participants want to pursue the next level in their driver’s training. 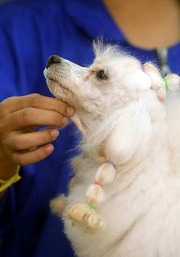 Make me beautiful ... A dog being groomedby a pet cosmetologist at the House ofGroomers.

It’s like being a hairstylist for animals, if you like. But House of Groomers’ certified master groomer Gan Wee Yet says it is tougher because “humans don’t bite, neither do they poo poo in the middle of grooming” and they “not only do manicures and pedicures but also have to clean the pets’ private parts.”

The grooming process involves bathing, blow-drying, removing dirt from ears and nails, grooming the whole body and caring for the dogs’ hygiene and skin.

While the GP course is on basic grooming, the PC course requires students to learn dog anatomy, recognise the 153 breeds listed by the American Kennel Club, understand veterinary technology, and learn how to handle and calm down aggressive dogs, as well as operate a grooming business.

“Show grooming is grooming the dog to the required standards of their breed. It’s about hiding their ‘faults’ and accentuating their beauty,” explains Gan.

“For pet grooming, the focus is on maintenance and looking cute.”

The programme is not all “fluff” as the school is equipped with special facilities like bath sinks, hydraulic grooming tables, dryers and instruments like powders, knives, combs and shears. There are even exchange programmes with partners in Singapore, Japan, America, Germany and Australia.

“Our students can go to our partner schools overseas to get exposure; they only need to pay extra for accommodation,” Gan explains.

To become a master groomer like him, one needs at least two years’ experience, be able to deal with all groups of dogs, and must sit for exams under certifiers flown in from the United States. The best part is, there are no academic pre-requisites to pursuing the course - one only needs to have a passion for pets.

“I even have bank executives and building material managers attending my school,” says Gan, adding that a pet groomer working for others can earn between RM1,500 and RM5,000, more if they set up their own salon.

Gan says they hope to make the grooming school a college one day. Not bad, indeed!