The first white valedictorian makes history in an all-black men’s college after 141 years.

FROM his first day at America's Morehouse College, in Atlanta, the country's only institution of higher learning dedicated to the education of black men – Joshua Packwood has been a standout.

His popularity got him elected dorm president as a freshman. His looks and physique made him a fashion show favourite.

His intellect made him a Rhodes Scholar finalist. His work ethics landed him a job at the prestigious investment banking firm, Goldman Sachs in New York City. 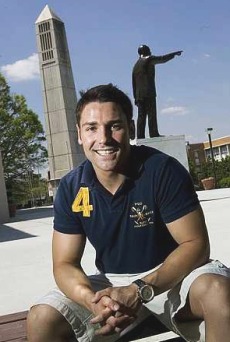 VALEDICTORIAN: Packwood, with the towering statue of Reverend King in the background, says he has no regrets being in Morehouse.— AFP

But it's his skin that has made all of this an anomaly. Today, Packwood is set to take the stage and address his classmates as the first white valedictorian in Morehouse's 141-year history.

The 22-year-old from Kansas City, Missouri, will graduate with a perfect 4.0 GPA score and a degree in economics.

He could have gone elsewhere, to Columbia, Stanford or Yale, but his four-year journey through Morehouse has taught him a few things that they could not, and he makes it clear that he has no regrets.

“I've been forced to see the world in a different perspective, that I don't think I could've gotten anywhere else,'' he said.

“None of the Ivy League universities, no matter how large their enrolment, no matter how many Nobel laureates they have on their faculty ... none of them could've provided me with the perspective I have now.''

When Packwood applied to Morehouse, he had frequent conversations with George Gray, an alumnus who was a recruiter at the school. Gray was impressed by Packwood's credentials and spent months trying to talk the sought-after senior into choosing Morehouse over other elite schools.

“He was outstanding and was the kind of kid we were looking for to be a presidential scholar,'' Gray said.

After several conversations, Packwood began to suspect that Gray had no idea that he was white. His suspicions were confirmed when Gray called him again.

“Don't let the white kids walk you down,'' Gray said.

There was silence, uneasy laughter and then confirmation, on the other end.

“The challenge was to get the best student that we could, and Josh definitely fit that,'' Gray said.

And for Packwood, knowing that he had been picked on his merits, and not as a token white recruit, made the difference.

It was not as if this was the first time Packwood had experienced life in the minority. He was among the few white students in his class at Grandview Senior High School in Kansas City, Missouri. His mother was married to a black man and he has mixed-race siblings.

Packwood’s experiences growing up have helped him navigate black culture while remaining comfortable with his own complexion.

His mere presence on campus wouldn't make history at this school, founded by a black minister and cabinetmaker two years after the end of the Civil War.

Howard Zehr, Morehouse's first white student, graduated in 1966, and there have been dozens of other whites on campus since.

Packwood turned down Columbia University, postponing his dream of living in New York City. He ignored some in his family who warned that he might not have the same opportunities he would have as a Columbia graduate, and headed South.

Packwood still laughs when he remembers his first day on campus, wandering the grounds in pajama pants and getting stares from black classmates who wondered if the freshman wasn't a wayward student from another university.

Packwood then headed to his room in Brazeal Hall. Shortly after, his roommate arrived with his mother. Four years later, Packwood still can't get over the irony: After years of being one of a few blacks at majority-white schools in Dallas, Phillip Smithey, his roommate had come to Morehouse to get the “black experience”. Instead, he was sharing a room with the only white guy in his class.

When he came to Morehouse, Packwood was reluctant to run for president of his dorm at the end of his freshman year.

The novelty was wearing off, but he didn't want his new friends to think he was the white guy trying to “act black'' or take over their school.

Classes proved to be a challenge socially and academically, when the discussions shifted to issues of race. Once, Packwood was asked to sit on a panel about interracial relationships.

Though he had dated black girls since high school, he spent the first hour of the panel getting warmed up, feeling out the crowd and trying to couch his thoughts.

“It was kind of heated, and there were very strong views on both sides,'' he said. “But eventually I realised they put me on the panel not to just pander to the crowd, but to voice my opinion.''

Packwood said such exchanges taught him a lesson.

“Sometimes I wanted to hold back,'' he acknowledged. “A lot of the professors and students said, 'No, don't hold back. We want your perspective here. If we're not going to get it from you, it's going to be very difficult for us to get it somewhere else.'''

Both students and faculty, he said, seemed to appreciate his honesty.

“The few times I have held back and tried to pick my words wisely or even go against what I truly believe, that's when I've caught the most flak,'' he said.

With each semester, Packwood's grades remained high, his confidence grew and his resume became more impressive.

Summers were spent on Wall Street at Morgan Stanley and Goldman Sachs, he studied abroad in London and Costa Rica, and his studies have taken him to China and Switzerland.

He also drew attention with his looks – some calling him “Tom Cruise”. His photo album on Facebook shows a smiling guy posing with dozens of young, black women who fill his page with notes.

As Morehouse embraced him, Packwood became an unlikely ambassador for the school.

“Josh Packwood is Morehouse,'' the college's president, Robert Franklin, said in his inauguration speech in February. “He happens to be Euro-American and brings much appreciated diversity to our campus.''

Wendell Marsh, a junior English and French major who is black, said talking to Packwood as a high school senior helped him make up his mind to come to Morehouse.

“Right now we live in a time where people say the black institution is obsolete, that you can get a better education at a majority institution,'' Marsh said. “To see a white guy who had declined Harvard for Morehouse, I figured it was good enough for me.''

Packwood raised “the bar for everyone,'' said Stanton Fears, a senior economics major.

“The best man got it, that's how I look at it,'' Fears said. “It's about equality here, too. If he wants to come here and make a name for himself, he should be allowed the same types of things we're allowed.''

Being surrounded by black men for his undergraduate career has taught him more about diversity, Packwood said.

“I've been here for four years and yet, I cannot give you the definition of black. I cannot tell you what a black man is. I really learnt to look much deeper. It takes a lot of effort to know people.''

Shake. Lean. Embrace. Release. This soulful ritual is repeated several times as Packwood greets his fellow classmates on one of his last days on campus.

Some congratulated him amid the buzz that he might be named valedictorian. There were those who thought there would be some bitterness, but animosity for Packwood's accomplishments is scarce.

Brandon L. Douglas, a junior business major who met Packwood as an intern on Wall Street after his freshman year, said Packwood has been a standout not for his skin, but for his successes on campus.

“He sticks out, but he's still relatable and he works with all of us,'' Douglas said. You don't see a skin colour with him anymore. You start looking more at his character.''

Douglas' words echo the most famous words of Morehouse's most famous alumnus, the Reverend Martin Luther King Jr, in his “I Have A Dream'' speech.

Not far from where Packwood is standing looms a towering statue of King, his bronze finger pointing towards the horizon. – AFP