A Sabah community in need

NESTLED in the jungles of Sabah is Kampung Sonsogon Magandai, where people lead a very basic existence and children grow up with no formal education.

“My first trip there was in 1996. I was shocked,” recalls De La Salle Brother Lawrence Spitzig in a documented account of his experience.

“It was a poor and neglected district. There was obviously a shortage of soap too, together with a shortage of almost everything – except charming smiles and perhaps an air of hopeless resignation. The children looked pale and unhealthy. Flies were bothering them without end.”

Six-and-a-half years on, some 40 children from the settlement are able to gain access to education, thanks to Bro Lawrence’s determination in providing them with the means to do so.

It is hard to imagine in an age where laptops and LCD projectors are replacing the traditional “chalk and talk” method of teaching that access to education still is a challenge for some communities.

“I started teaching in Malaya in 1937. I was under the impression that all children had fair access to education. That was until, of course, I visited Kampung Sonsogon Magandai. The worst part is, this is just one settlement among the many in East Malaysia,” Bro Lawrence tells Star Education in an interview.

Bro Lawrence’s encounter with the kampung happened by sheer chance, or as some may say, fate.

“It was an article in the May 7, 1996 edition of the New Straits Times entitled 'Villages in dire need of school’ that started the ball rolling,” he says.

The article, however, referred to Kampung Sungai Magandai, also located in the poverty-stricken district of Pitas in northern Sabah.

Touched by the article, Bro Lawrence seized the first opportunity he had in August that year to visit the place on an invitation from Sabah Journalists Association chairman Joniston Bangkuai, who had written the story about the village. In Bro Lawrence's account: “After a gruelling five-hour journey, the last part of which was a matter of clawing and climbing a timber lorry trail, hewn and hacked through jungle-clad hills, we were greeted by the villagers’ smiles. There were some 700 villagers living in very poor conditions.

“There was no mistaking the poverty and abject living conditions. There were no proper roads, no school, no hospital, no electricity, no piped water, no shops, no doctor. Some medical relief was available, however, brought in occasionally by a helicopter service.”

It was during this visit that Bro Lawrence met another journalist, Colin Forsythe, who told him that the conditions at Kampung Sungai Magandai were nothing compared to Kampung Sonsogon Magandai.

After a two-hour journey, Forsythe introduced him to the settlement and Bro Lawrence was left even more shocked.

“We had come empty-handed to Sonsogon but left troubled,” he says.

Upon his return to the De La Salle Brothers’ Quarters in SM St John’s, Kuala Lumpur, Bro Lawrence began spreading word about the settlements in the hope of garnering help and support for them.

Since its inception over 350 years ago in France, the De La Salle order has become synonymous with education.

“It began as a school for the street children in France, as education then was only for the rich. The tradition continues today where we try the best we can to provide education for those who cannot gain access to it,” Bro Lawrence explains.

In Malaysia, La Salle schools have a rich history and tradition.

Since their arrival in the Malay Peninsula in 1852, the De La Salle Brothers began opening one school after another, among them St Michael’s Institution, Ipoh; St George’s Institution, Taiping; St. John’s Institution, Kuala Lumpur; and St Paul’s Institution, Seremban. “It is instinctive that we help communities in need of education and the Kampung Sonsogon Magandai was such a community,” Bro Lawrence says.

By 2000, enough help had been garnered to house some of the kampung children in a hostel in Kota Marudu where they now attend school.

“The sad thing is having these children leave their families just so they can attend school. Kota Marudu is a four-hour drive from the settlement with most of the journey being in first gear, trudging through some rough terrain and a river.

“To make things worse, the river can be crossed by the vehicles only during low tide. There used to be a bridge but it has since been washed away after logging activity in the area ceased, to make way for oil palm plantations,” says Bro Lawrence.

The children now stay at the hostel under the care of nuns and volunteers. To “earn their keep”, the children do chores and some basic farming.

“There is still a lot to be done. My dream is to have a road leading to the kampung built and for a school to be set up there. While the children should get education, it should not be at the expense of having to leave their families,” Bro Lawrence says of the children, all of whom are in primary school.

“I appeal to all those who can to come forward and help this community. They need what most of us take for granted – a school, proper water supply (the villagers now have to endure a long walk to a river to collect water), roads and so on.”

Given the extreme circumstances in which the children get to attend school, not all do so. Some families refuse to be separated as they have never left the settlement.

At the end of his account, Bro Lawrence writes: “My visits to these two kampungs were an eye-opener. I have food for thought and yet one more powerful reason in career discernment talks to the more favoured ones in city schools, to appeal to their love and generosity to have service to the poor and needy be a top priority in their choice of career – no matter what the career turns out to be.” He adds during the interview: “They need your help, please come forward.”

The interview ends abruptly after a phone call from a former La Sallian who has managed to get Bata to donate shoes for the village.

For more information or to help, call Brother Lawrence Spitzig at 03-2072 8594 or e-mail him at L_spitzig@yahoo.com 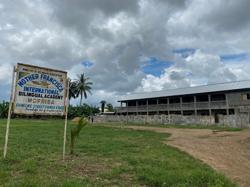