Serious about being funny

Burhanuddin says he entered the animation business by chance because he wanted to try something different.

The predominant atmosphere in Les’ Copaque Production Sdn Bhd in Shah Alam appears to be one of fun.

Of course, there are times when it can be intense, especially when the company’s animators have to work around the clock on the animated children’s series Upin & Ipin.

“I always wanted the work environment to be fun. I may not be the talent in the company, but I try to create a stress-free working environment for everyone here.

“The animation industry is different from the TV and film industry. Les’Copaque is actually a technology company telling stories,” said Burhanuddin Md Radzi, the founder and managing director of Les’ Copaque Production.

This is remarkable, considering that the award-winning animated series is produced by a small, independent animation company that was set up in December 2005. 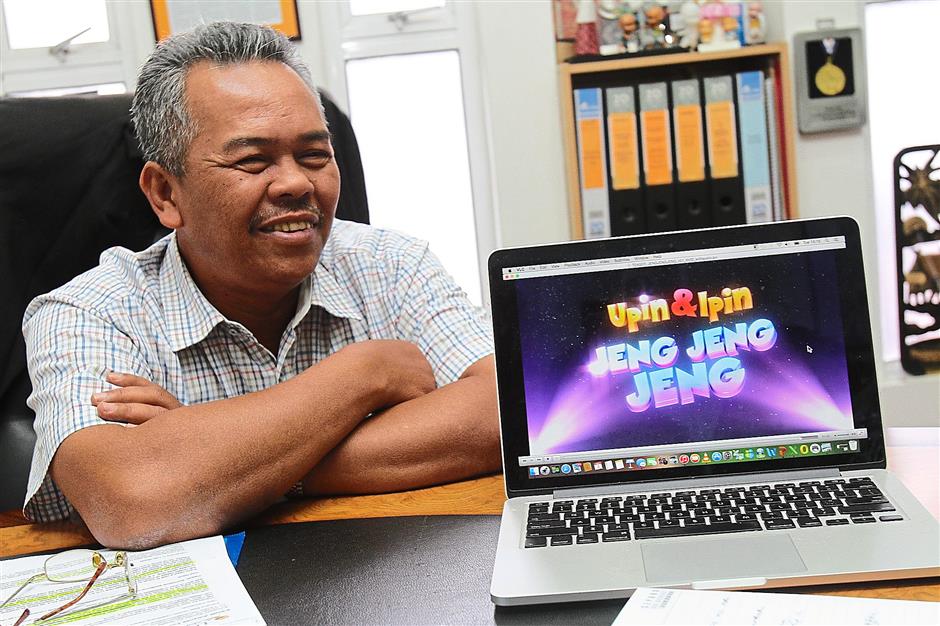 Burhanuddin says he decided early on that he couldn't just ape the work of big names in animation.

In the nine years it has been around, the company has inspired the growth of the local animation industry.

Les’Copaque has become successful because the popular characters Upin and Ipin incorporate elements of Malaysian culture that have universal appeal in a high-quality 3D animated television series as well as advertising and public service messages.

“I chose the name Les’ Copaque because I wanted an international name and it’s the French-sounding version of the Malay phrase “Last Kopek” (last card). The name suits our goals, as it infuses a unique Malaysian phrase with an international flair where young Malaysian animators can bring their imagination and creativity to life,” said Burhanuddin, a petroleum engineer by training.

Burhanuddin entered the animation business by chance as he wanted “to do something different and just for fun”.

As coincidence would have it, he was introduced to a group of animation graduates who aspired to make an animated feature film in the mould of Walt Disney, and needed an investor.

“My wife, Ainon Ariff suggested that we make light-hearted Malaysian stories that everyone could relate to. So we chose to produce the 20009 animated film, Geng: The Adventure Begins,” said Burhanuddin, who became the financier for the movie.

He also knew spinning off intellectual property, such as characters, into a large and prosperous business, would be. 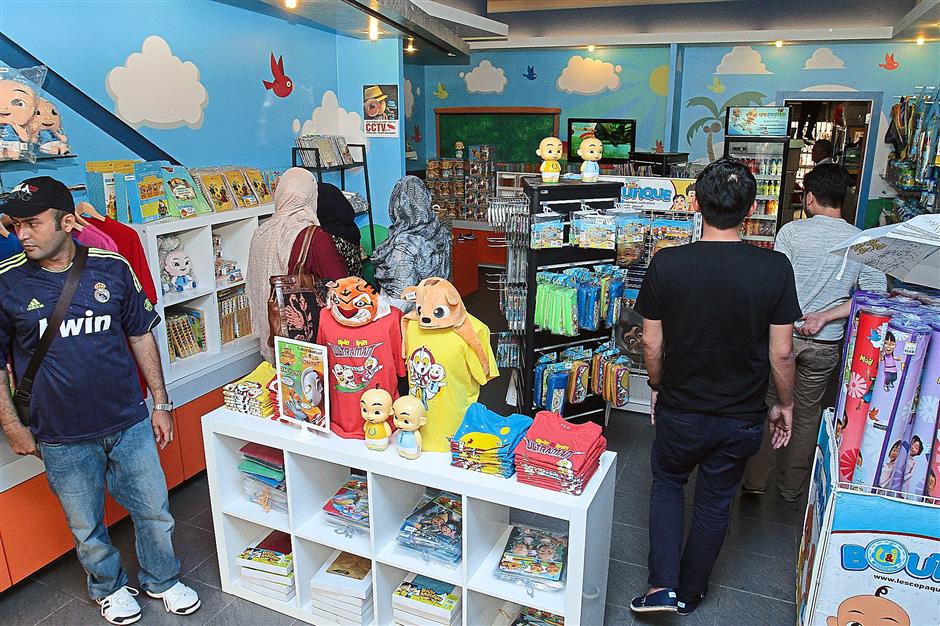 A big hit: The success of the company's animated characters has led to the setting up of a merchandising arm.

“I agreed to finance the movie provided they follow my business model and let my wife handle the creative content. It was a bold move at that time as the Malaysian animation industry was small and locally produced animation could not compete with larger studios to create a full-length animated feature film. This meant a significant investment in time and resources,” he said.

Burhanuddin studied the process of animation production and concluded the business plan should be modelled after a factory, which requires a structured pipeline for production and a unique training module for new staff. He and his wife spent eight months of research in order to develop the desired production process and training module.

Industry experts also told him that a successful homegrown Malaysian animated film would mean the setting, characters, and story must have global appeal.

So he decided to go to Cannes to get some ideas. Being new, with no proven intellectual property in the form of characters, names, stories and settings of his own, Burhanuddin concluded he had to produce a movie that did not copy the hits from big foreign companies but was uniquely Malaysian and intended for a local audience.

He decided on a traditional kampung setting for the storyline that would include cultural expressions, folklore and some traditional performances, food, and crafts that Malaysians could relate to.

The movie took three years to complete. In all, it required a RM4mil investment and another RM1mil grant from the Ministry of Science, Technology and Innovation of Malaysia, before its release in 2009.

As part of the marketing strategy for the movie, just before the release of the film, Les’ Copaque started work on a short animated series with the two main characters of the film, Upin and Ipin.

“I wanted to prove a few points with Upin & Ipin, to gauge the Malaysian reaction to an animation series by a local company. Secondly, it would be a test to see the acceptance of the international audience to a Malaysian animated movie. And local animators were given a chance to hone their skills at creating Malaysia’s first homegrown computer animated feature film.

Upin & Ipin was chosen due to technical reasons. Since they are twins and have no hair, it eased the technical aspects of animation. Realistic hair is a taxing animation process,” explained Burhanuddin.

Not surprisingly, Upin & Ipin appealed to children the most. The characters, five-year-old twins who had lost their parents, live in a kampung with their elder sister Ros and maternal grandmother Opah in a wooden house.

The stories revolve around Upin and Ipin’s humorous adventures in Kampung Durian Runtuh.

Initially, because they had to work out of a room the size of a closet and on a minimal budget, Les’ Copaque cut costs by making sure there were fewer characters to animate.

During its first seven weeks in local cinemas in early 2009, the movie raked in over RM6mil in profit.

Geng: The Adventure Begins went on to bag the “Best Animation film” award at the Kuala Lumpur International Film Festival and other prestigious awards.

“Developing an animated film was not easy. But once out, everyone fell in love with Upin and Ipin. Those who were used to typical Western animation like the Disney characters, found the lovable Upin and Ipin very refreshing.

Within a few years, the Upin & Ipin series became an international success.

In 2011, the company came out with a new animated TV series, Pada Zaman Dulu (Once Upon A Time), a collection of famous local animal folklore told in a style different from Upin & Ipin.

It became the first Malaysian animated series to feature computer animation techniques. The series centres on the adventures of city kids, Ara and Aris, as they explore life in a village with stories of Sang Kancil (Mouse Deer) from Malay folklore. The series went on to be aired on TV Al-Hijrah, Astro Ceria and MNC TV Indonesia.

Last year, Les’ Copaque began developing the series, Puteri, which highlights the adventures of female warriors Kasturi, Manis, Nipis, Purut and Bali. Puteri will be out next year. The company’s second movie, Upin & Ipin The Movie is scheduled for release in 2016. 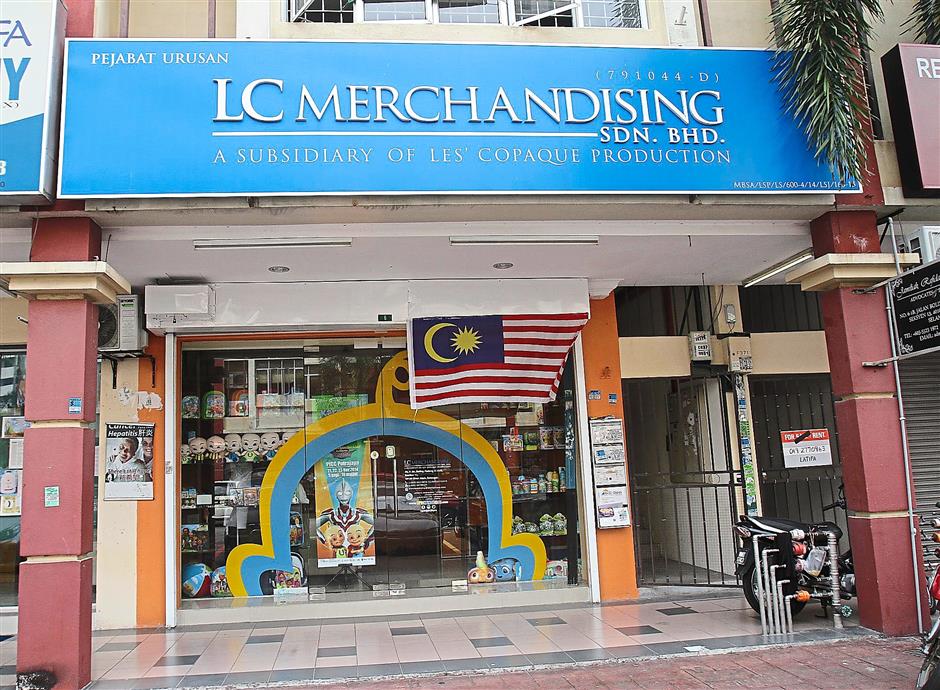 “I believe that good story telling is what makes Upin & Ipin popular. After we launched the short five-minute Upin & Ipin clips featuring Upin and Ipin in 2007, the series has gone on to become television series screened in 17 countries. It was the first fully produced Malaysian animated series that was picked up by Disney Channel Asia and Televisi Pendidikan Indonesia,” said Burhanuddin.

Upin & Ipin is aired in both Bahasa Malaysia and English, and their YouTube presence has made it accessible to fans in countries as far as Uzbekistan.

Les’Copaque is working on plans for a Upin & Ipin theme park, expected to cost some RM700 million, if it the plans work out.

Though Les’ Copaque has successfully spun-off their IP into a value chain of businesses, Burhanuddin makes sure his staff and animators learn how to de-stress and take it easy.

“You must know when to work hard and when to relax. After all, we are in an animation business and making cartoons. We can’t be too serious!”