A total of RM29.5mil has been allocated for the highly anticipated Integrated Transport Information System or ITIS 2.0 in the Kuala Lumpur City Hall (DBKL) Budget 2015.

Kuala Lumpur mayor Datuk Seri Ahmad Phesal Talib said the sum was put under next year’s budget as DBKL had not paid the contractor, Telekom Malaysia Bhd, because the latter had not fully handed over the project yet.

“This year we have not spent anything as the project is still not fully operational.

“It is a leasing contract whereby the supplier leases to us computers, closed-circuit television cameras and other equipment,” he said.

He said that up until last week, 87% of the equipment were operational.

DBKL Urban Transportation Department director Dr Leong Siew Mun explained that DBKL did not need to fork out a single sen until the system was fully operational.

“It is stated in the contract that we will only pay Telekom once everything is fully operational,” he said.

He reiterated that if Telekom did not complete the project by December, the company would have to pay a fine, adding that Telekom had taken over the contract from GTC Global Sdn Bhd.

It was reported in August that the ITIS 2.0 project — created to ease congestion and help in efforts to reduce crime in Kuala Lumpur — had been delayed yet again.

This time it was because of minor glitches, which had been described by Ahmad Phesal as “excuses”.

The mayor had confirmed to StarMetro that the city’s much-improved ITIS 2.0 would not be launched this year as previously announced, attributing it to a lack of co-ordination between utility companies and the contractor.

The multi-million ringgit transportation surveillance system was supposed to have been fully operational two months ago, but the mayor admitted that the contractors were not able to deliver it on time.

He said the system would hopefully be fully operational at the start of next year. 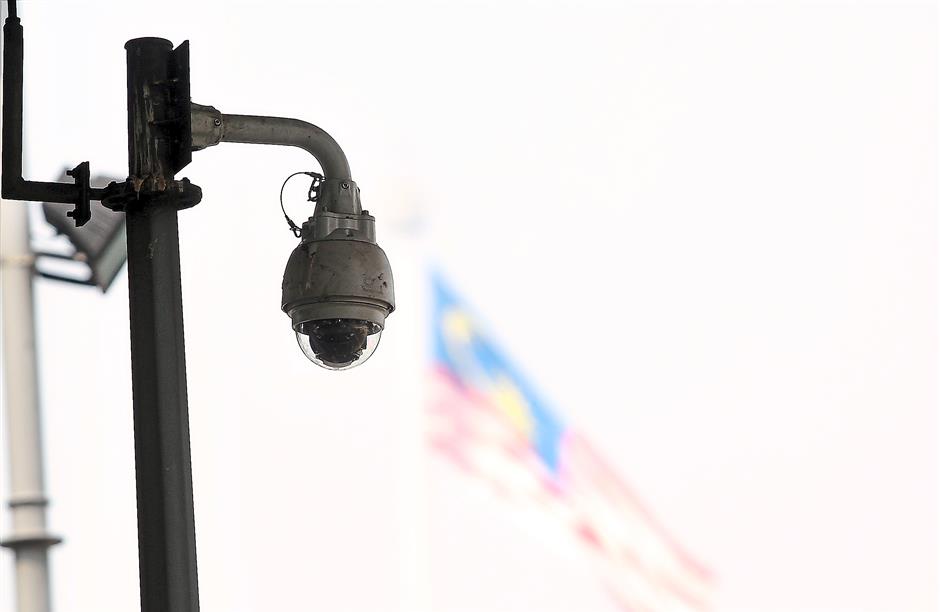 Under the revamped ITIS system, there are a total of 1,000 new CCTV cameras.—filepics

“If they delay further, we will take action by imposing a financial penalty,” he warned. “We will fine them for every day that it is delayed. The liquidated and ascertained damages (LAD) is RM50 for each camera each day,” he was quoted as saying.

Under the revamped ITIS system, there are a total of 1,000 new CCTV cameras, hence it will cost a whopping RM50,000 a day if the contractor were late in handing over the project.

This is the third time the project has been pushed back. It was originally supposed to be ready by the end of 2013. The appointed contractors GTC Global, a subsidiary of Telekom Malaysia Bhd, had asked for an extension to February this year, and then to June.

Subsequently it could not meet the latter deadline either.

“We are disappointed. The reasons the company gave for their third deadline extension request were that they could not get power supply from Tenaga Nasional Bhd and could not get a permit to dig up the area.

“I have asked Telekom Malaysia to step in and co-ordinate, to speed up the process as there have been too many delays,” Ahmad Phesal said.

“This (ITIS) is a necessity for the city as it involves not only traffic surveillance but safety too,” he added.

The system is integrated with the new CCTVs and 140 variable message signboards (VMS).

Ahmad Phesal said the estimated cost was RM168.1mil to improve the drainage system and for river maintenance.

Of the total amount, RM31.9mil will be from DBKL’s coffers, RM11mil under the 10th Malaysia Plan, RM125.1mil for River of Life project and RM100,000 to gazatte river reserves and flood retention ponds in Kuala Lumpur.

The mayor said focus would be on upgrading the drainage system, especially old drains, and building a main drain from Jalan Kelapa Raman SPPK Segambut to Sungai Toba to overcome flashfloods in Segambut Bahagia.

When asked about drainage upgrades in the city centre, he said it was included in the planning needs involving mega projects.

“These projects are done by stages so time is a problem. If we cannot wait for the projects to be completed, we will widen the drains ourselves,” he said, adding they were mostly located in Jalan Conlay, Jalan Raja Chulan and Jalan Stonor.

Ahmad Phesal said such an expenditure would come under the Maintenance and Infrastructure Development Programme that had a budget of RM253mil for improving roads and slopes through 37 projects.