Marked stone to commemorate and celebrate the Seduan Melanau community

Preparing for the symbolic ceremonial cockfight.

SIBU: The Seduan Melanau community, who can trace their roots as far back as the 1700s, have put up a memorial to celebrate their historical heritage.

Constructed from granite, the memorial is located at the Melanau community cemetery at Kampung Nangka here.

It reads: “A Historical Memorial (circa 1700-1900 AD). In memory of the Seduan Melanaus, who settled at the left estuary of the Seduan River (now called Sungai Merah). This same Melanau community gradually resettled at the present Kampung Nangka site from about the late 1800s to the early 1900s.

This Seduan Melanau Cemetery was used as a burial ground when the community was still living at the estuary of the Seduan River. Among the Seduan elders who were known to have been interred at this site based on information from their close relatives are: Abang Janalak, Dayang Permi and Abang Senaun. May their souls rest in peace.”

Some 50 multi-generational members of the community gathered at the cemetery recently for a traditional ceremony to mark the completion of the memorial. Datuk Aloysius J Dris (left) gives a briefing on the significance and background of the memorial.

The ceremony began with Christian prayers and was followed by an explanation of the memorial’s significance by Datuk Aloysius J Dris, the main proponent in building the memorial.

“The main reason for us to have this event, is so that the younger generation in our community do not forget our history and origin.

“This initiative is not meant for the sake of glorification but to share the story and history of the Seduan Melanau community for the next generation to remember and continue to share it,” he said.

According to him, the eruption of Mount Krakatoa in 1883 was a historical reference point for the community because when it occurred they had already settled in the Seduan River area for many generations.

Noting that the Seduan River is now referred to as Sungai Merah, he said there was still debate on whether the Melanau community there was named after the river or whether the river got its name from the people. 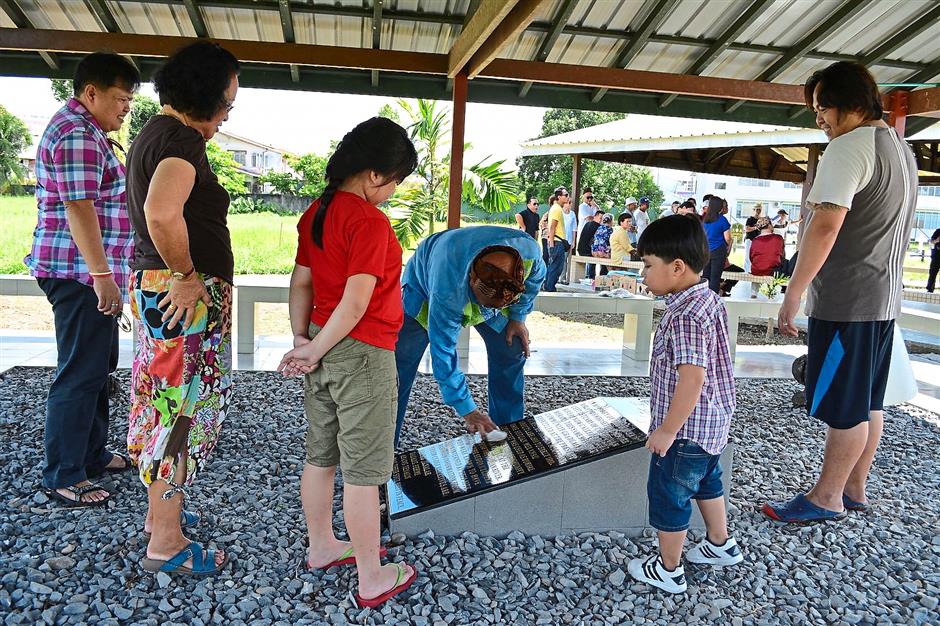 Members of the community ensuring that the memorial is spotless for the ceremony.

Aloysius also said there were many research topics that the younger generation could pursue to document their community’s historical heritage.

“The Sarawak Museum, journals and writings of the Brooke and British colonial-era officers can be starting points for your research in learning more about our community.

“The Brunei Museum and government archives can also be a source of research material for the young people in the community, who I hope will take up the challenge of documenting our heritage to fill in the gaps of our community’s history,” he added.

During the dialogue that followed, members of the community shared their own knowledge of the Seduan Melanau’s heritage based on the oral history passed down by their elders.

A symbolic ceremonial cockfight was also held near the memorial, in keeping with tradition at highly significant events of the community in the past.

The memorial is placed where a traditional burial shed known as a “bakut” once stood and where at least three graves are sited.

Four ancient grave markers made of belian still stand under a reconstructed “bakut”, which serves the purpose of protecting them from the elements.