McManaman showing off some football skills much to the delight of fans.

IT WAS a dream come true for more than 300 football fans when they rubbed shoulders with four Barclays Premier League (BPL) legends at Carlsberg’s Ultimate Football Retreat.

Fans had the chance to get up close and personal with Dennis Wise, Steve McManaman, Gianfranco Zola and Sol Campbell at Avani Sepang Goldcoast Resort.

They also watched two football matches live and participated in fun games for a chance to win an all-expenses-paid trip to Britain to watch a BPL match.

The fans comprised winners of the brewer’s recent BPL consumer contest and they were allowed to bring along three friends to the retreat.

The weekend kicked off with a meet-and-greet session with the legends.

Wise, Zola and McManaman had been to Malaysia before but it was Campbell’s first time here.

“I’m excited to enjoy the beautiful beaches and experience the warmth and friendliness of Malaysian football fans,” said the former Arsenal, Tottenham and England captain. 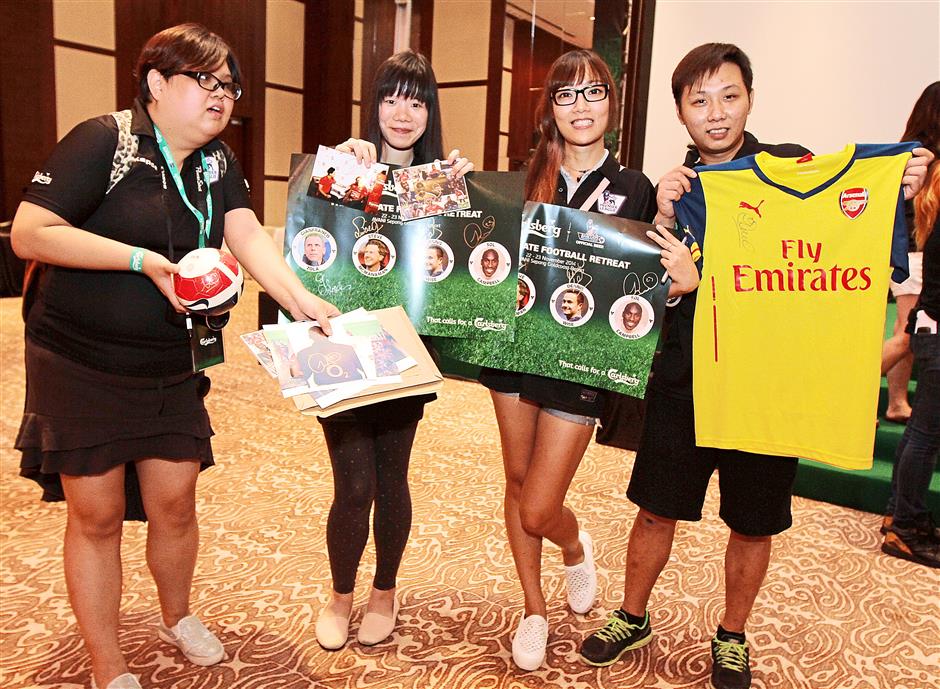 Fans were seen queueing up patiently with posters, jerseys, boots and other memorabilia to be autographed by the legends.

“My wife got me this book which has newspaper articles of Liverpool since 1906.

“I got Steve McManaman’s autograph on a headline which was about him,” said Kuhan who plans to collect as many legends’ autographs as possible.

There were also 30 winners from Hong Kong who joined the retreat.

“In the past, we have organised meet-and-greet sessions with football legends here in Malaysia and sent lucky Carlsberg consumers to watch BPL matches live.

After the meet-and-greet session, the legends and fans spent the afternoon playing games such as ZigZag Football, Football Pong and Bubble Football by the Bagan Lalang beach.

During dinner, the legends mingled with fans while being entertained by live band Hard Candy and an LED dance performance.

Later, they were all treated to live BPL action on big screens with Man City taking on Swansea, followed by the big game of the night — Arsenal vs Manchester United. Some of the lucky fans posing for a group photo.

The legends joined hosts Adam Carruthers, Roshan Narayan and Abbas Saad to deliver pre-game, halftime and post-game shows of the Astro Supersports BPL Weekend which broadcast live from the venue of the viewing party.

“I am very excited. This is the first time I have won a grand prize and I cannot wait for my trip,” said Ngo.

The retreat certainly lived up to its promise of giving fans a football-filled weekend with their friends.