By STUART MICHAEL and VINCENT TAN

Sungai Gong has been diverted so that it runs right between a metalworks factory along Jalan Batu Arang (B27), near Bandar Country Homes.

RIVERINE areas in Klang Valley, particularly in Selangor, have an estimated buffer area between five and 30 metres but with rapid development over the years, changing river alignments and Drainage and Irrigation Department’s (DID) lack of enforcement, businesses and industries have ended up right beside a river.

As a result, there has been an increase in incidents of river contamination and illegal dumping.

The most recent contamination occurred on Oct 11 after hydraulic fluids spilt into the river near Matang Pagar,

A year ago, parts of the Klang Valley had their water supply stopped or disrupted for more than a week while authorities scrambled to clean up diesel floating down Sungai Bakau, along Jalan Batu Arang B27, into the Sungai Selangor treament plants.

These cases of river contamination have consequences beyond causing inconvenience and hardship for the public at large. They cost a lot of money to clean up and remedy, including repairing or replacing equipment parts at water treatment plants.

StarMetro visited the main river Sungai Selangor and its tributaries in Kuala Kubu Baru, Batang Kali, Serendah annd Rawang to check on the extent of the problem.

In Kuala Kubu Baru, Hulu Selangor District Council garbage trucks are regularly cleaned at the council depot located next to the river on DID reserve land. The same facility also functions as a pound for captured strays, with waste dumped into Sungai Kubu that runs behind the premises.

Beside this compound, garbage contractors wash their vehicles and the wastewater runs into the river. Sungai Kubu is a tributary that feeds Sungai Selangor. Caught in the act: A garbage truck waiting to be washed at the district council facility situated right on DID reserve land next to Sungai Kubu, in Kuala Kubu Baru.

A resident staying upstream of the council facility, said garbage trucks used to be washed and cleaned out in the late evening twice or thrice a week.

“Then a year ago, the routine changed and sometimes the trucks are washed here late at night after their collection.

“The smell is so bad when they empty their trucks,” said the resident.

In Batang Kali, wastewater run-offs can be seen originating from the single-storey shoplots next to the bus terminal into Sungai Kali, which also feeds Sungai Selangor. The businesses here include restaurants, motorcycle workshops and sundry shops.

These shoplots are located less than five metres from the river and are sitting on river reserve land. The minimum setback is not met and yet there is no action from DID.

At Sungai Gong in Bandar Country Homes, Rawang, a cowshed still inhabited by its bovine tenants is sited right next to the river, even as works by DID are ongoing to widen and stabilise the riverbanks.

Further upstream, near the confluence of Sungai Gong and Sungai Bakau, a factory is neatly bisected through the middle by Sungai Gong.

The factory owner said it was not his fault as he had the land title but DID diverted the river into his factory lot. 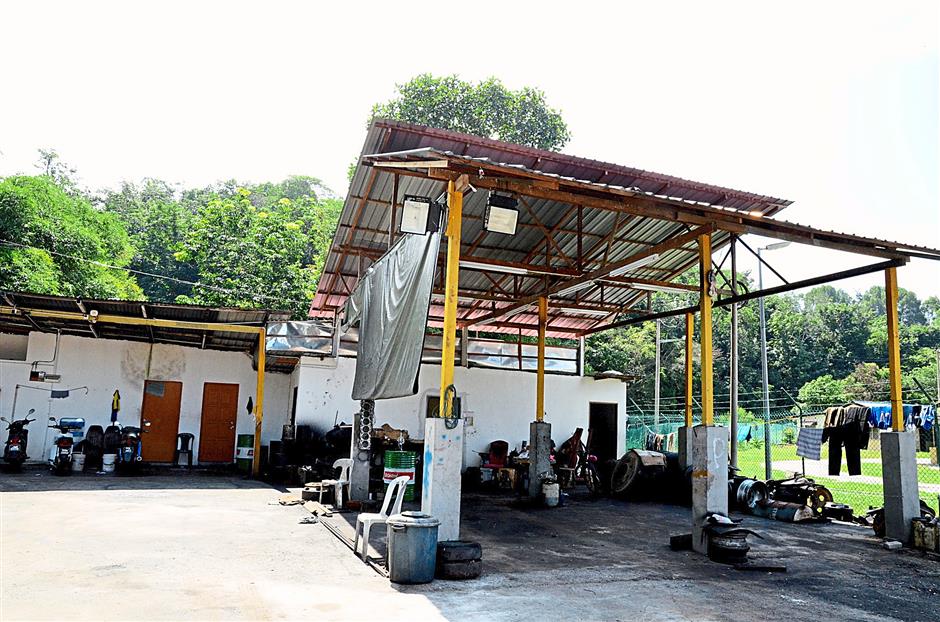 A photo of the cleaning station operated by a council-contractor. Sungai Kubu runs right behind this facility.

In Kampung Sungai Bakau, two restaurants are located next to Sungai Bakau and one can see foodscraps being thrown into the river.

A short distance away, one can also see an old toilet structure from a local temple half-submerged in the river, where it had fallen in due to erosion.

Nearby, there are even some construction materials discarded into the river.

Kampung Sungai Bakau suffers from floods when there is a downpour because of the backflow from Sungai Bakau.

Gombak district officer Datuk Nor Hisham Ahmad Dahlan said he had submitted a paper to Selangor DID on ways to compel business proprietors and factory owners to comply with the minimum five-metre buffer zone. He had prepared the paper when he was Hulu Selangor district officer.

In his paper, he also suggested that Hulu Selangor Land Office help in enforcing the law and evict squatters from river reserve land as DID did not have an enforcement team.

He said that he did not receive any reply from DID and there was no development on the matter after that.

“Restaurant owners and other businesses just throw things into the river without thinking of the consequences.

“I will just say this ‘what you throw into the river is what you will drink eventually’.

“Throwing things into the rivers in this area will affect raw water collection at the treatment plant in Ijok, which supplies about 70% of folks in the Klang Valley.

“There should be strict enforcement when it comes to industrial, commercial or residential properties next to a river. The rules exist, but enforcing the rules is a big problem,” he said.

Selayang Municipal councillor Gunarajah R. George said DID was doing well with the upgrading and widening of Sungai Gong but it was also vital that the department widens and deepens Sungai Bakau too.

“However, all their efforts will go to waste if people continue to throw rubbish into rivers.