THE Malaysia Space Centre (MSC) is setting its sights on something a little closer to the ground by opening its doors and technology for use in other industries.

Located in Banting, the centre — along with the National Planetarium and National Observatory Langkawi — is managed by the National Space Agency under the umbrella of the Science, Technology and Innovation Ministry.

Its director-general Dr Noordin Ahmad believes that its recently installed equipment has the potential to be used in many other applications.

“This facility is equipped to build and test satellites.

“It is also able to calibrate equipment attached to satellites,” he said, adding that this was a one-of-a-kind facility in South-East Asia and its equipment installed this year. The Malaysia Space Centre which is located in Banting currently only uses about 10% of its total land area.


Dr Noordin said the space centre was tasked with testing satellites and related equipment to ensure they could withstand all the conditions that exist from the point of lift-off to their time in space.

“For instance, there is a thermal vacuum chamber that is capable of producing temperatures as low as -120°C to 150°C and can be sealed for long periods.

“Next to it is a an electromagnetic-proof room with foam cones lining its walls and ceiling, blocking off outside signals from interfering.

“There are also two machines called ‘shakers’ that can be attached to an item such as a satellite for vibration tests,” he disclosed.

Another room is built to test structural stability against low to high frequency sound up to 155dB (about the same as a jet taking-off heard at extremely close range and will likely result in eardrum rupture if the ears are not protected).

“I believe there are many other industries that could use such equipment, including the communication industry and vehicle manufacturing sector.

“We have also opened up the facilities to universities,” said Dr Noordin, adding that he is open to application ideas for the equipments. 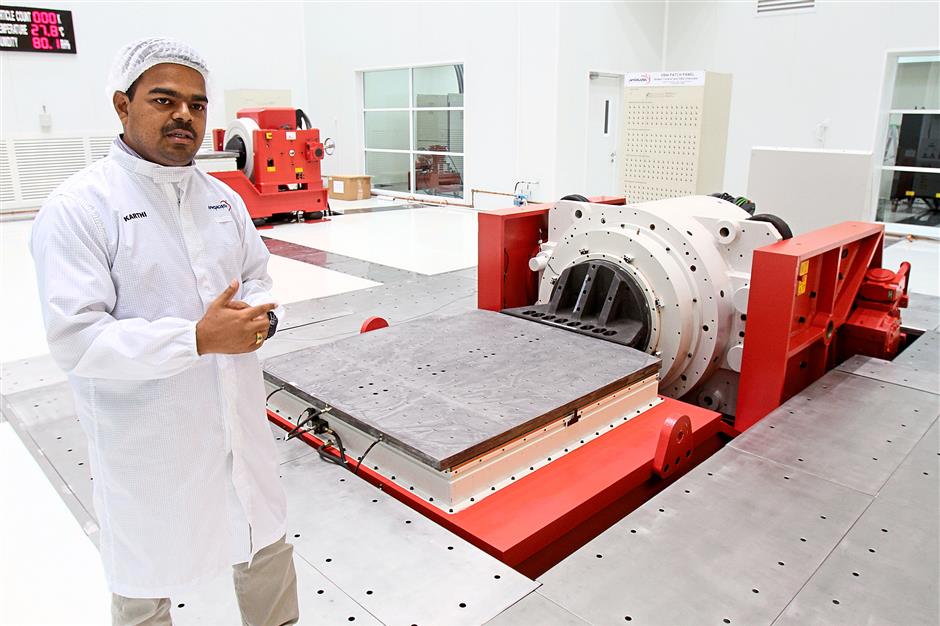 
As for its core activity, the centre is building a new satellite called the RazakSAT2 that will be equipped with a high-resolution camera to take images of the country, a service that can be extended to other countries.

“We are still at the learning and capacity-building stage.

“The RazakSAT1 was built with the Koreans, who at that time was also learning to build them.

“The new satellite will be tested here but there are components that will have to be imported because we do not manufacture them here.

“We ventured into satellite development in 1996 and now hope to be able to join the elite few in the world capable of building our own,” Dr Noordin said, pointing out that much of space technology and innovations had been focused on downstream applications. Dr Noordin says that he is open to ideas on how the equipment installed at the Malaysian Space Centre can be used in other industries aprt from satellite building and testing.


The MSC’s earliest structure is the mission control centre that is able to control and maintain satellite operation as well as communicate with satellites in the lower and middle orbits.

“We have experience helping with control of European satellites, which mostly involves ensuring they are in working order.

“Our centre was also used to monitor in this region the launch of the Indian satellite Mangalyaan, which was deployed to study Mars, ,” he said.

He also revealed that the MSC facilities only occupied 10% of the 161.9ha land and future plans included constructing a space science lab to facilitate micro gravity tests, or zero gravity in layman terms. The centre began contruction in 2004 and the first building was ready a year later.

“For now, we have ongoing astronomy studies as well as education and awareness programmes.

“Annually we nominate experiments to be carried out in a parabolic flight as well as in space under the Try Zero-G contest that is organised by the Japanese on the International Space Station.

“Last year, two out of three experiments selected came from Malaysia, one of it was by an expatriate staying here,” he added.

Space research has been increasingly blurring the line between fantasy and reality in today’s world, Dr Noordin noted.

“Here, we are also building applications that utilise GPS. One of it is for an emergency medical response app while another is on monitoring public transportation.

“While it is not anything new in other parts of the world, in Malaysia we have yet to use them to their full capabilities,” he said.