cheers and applause resounded throughout Nu Sentral Mall at KL Sentral, Brickfields, as students rooted for their teams competing in the grand finale of the Hotlink Campus Red Challenge.

The contestants battled it out at the mall’s centre court in a race where speed, agility and endurance took centre stage.

In a setting that is similar to the X-Games, the Red Challenge required contestants to face their fears as they completed seven challenges.

Among the challenges were jumping across a wide ledge, balancing on a long plank, traversing a wobbly bridge and climbing a spider rope 7m above the ground. 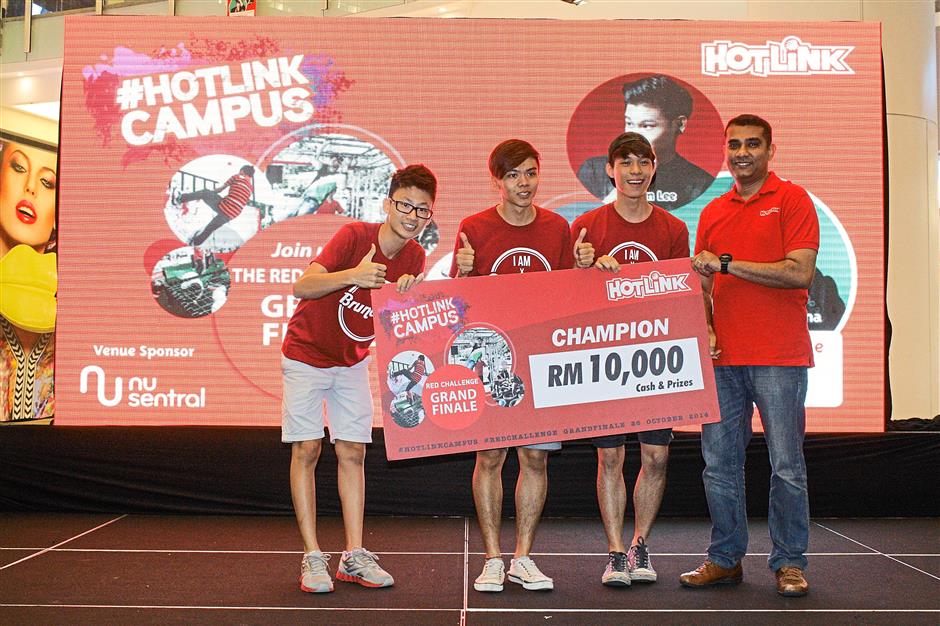 Members of Team Look At Me Now from UTAR receiving their prize.


The event kicked off with a warm-up session with RJVN Dance Crew.

Students put on their harnesses, helmets and other safety gear before embarking on their quest to emerge as champions.

Team Look at Me Now from Utar came out on top with a record-breaking time of 4:01.

The first runner-up, also from Utar, was team I Love Hotlink, who managed to complete all seven tasks in 4:10.

The second runner-up was team Sissy Brother from TARUC Setapak with a time of 4:38.

“We are excited to be a part of this event and welcome the finalists to Nu Sentral,” said MRCB group retail asset development general manager Zetty Rahim.