IT WAS an experience of a lifetime for some 20 pupils as they connected with the International Space Station (ISS) via live radio communication at the National Planetarium.

The pupils from SK Taman Tun Dr Ismail 1 and SJK (C) Puay Chai 2 has the opportunity to ask ISS flight engineer and American astronaut Gregory Reid Wiseman one question each about space and the conditions aboard the station as it passed over Malaysia at 7.14pm on Nov 1.

As the space station approached local skies, the pupils counted down to the point of radio contact and cheered when they heard Wiseman’s chirpy greetings from outer space coming through the amateur radio set in the National Planetarium’s micro-satellite building. Led by station controller Sangat Singh, the pupils asked their questions clearly, such as “Is it hard to eat in space?”, “What time zone is observed in space?” and “How does it feel to float in space?”

Held since 2007, the annual event is organised by the National Space Agency (Angkasa) and the Science, Technology and Innovation Ministry.

It is part of the National Space Challenge Programme and held in conjunction with World Space Week that kicks off tomorrow. 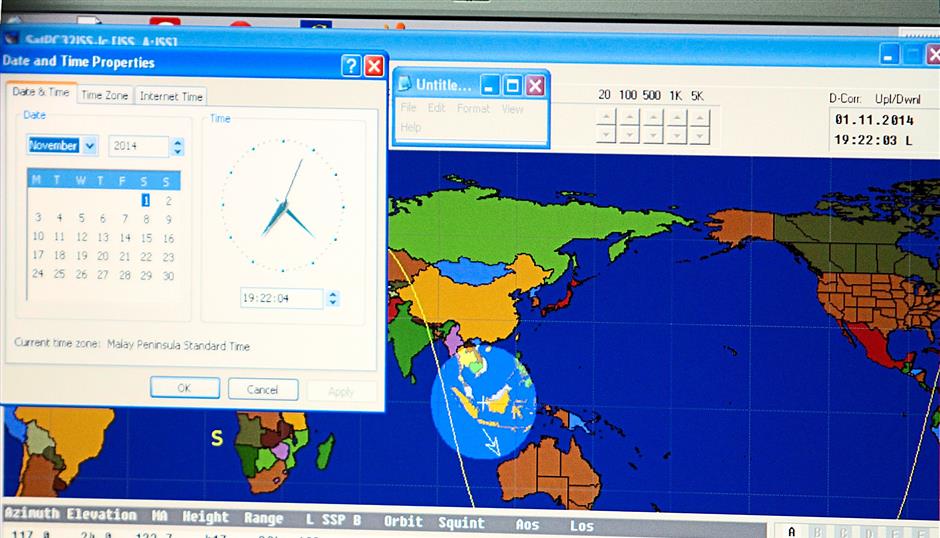 Sangat Singh tracking Malaysia’s position in the orbit of the ISS in order to establish contact with Wiseman.

“It is a chance for students to connect with the human element in this field of study. It started in 2007 with our own astronaut, Datuk Dr Sheikh Muszaphar Shukor Sheikh Mustapha. We usually time it to coincide with the National Space Challenge programme,” he said.

SJK (C) Puay Chai 2 pupil Tan Li Xuan, 12, said he was excited at the chance to pose a question to Wiseman.

“I volunteered to join in the event as I am very interested in this field,” he said. Wiseman answered each of the pupils’ questions via live radio link.

He said he was surprised at Wiseman’s answer to his question “What language is commonly used at the ISS?

“I was astonished to learn that apart from English, Russian is also used at the ISS. According to Wiseman, many of the astronauts are American and European,” he said.

The ISS was first opened on Nov 2, 2000, by two Russian cosmonauts and an American astronaut.