Penang-based firm sets sights on exporting its plasticware to Europe

‘Elianware’ plastic houseware and kitchenware products on display in the showroom.

Its 20th anniversary is just around the corner and the Penang-based company is looking at growing business abroad.

Ee-Lian chairman Heng Sew Hua remembers when the company was founded in 1994 by he and managing director Teoh Han Chuan with capital of RM100,000.

“We started in a small shop on Armenian Street, designing our own plastic containers. Since we did not own any plastic injection moulding equipment then, we had to outsource the work.

“In 2005, we invested in a plastic injection moulding plant in Bukit Minyak, which helped us to save about 30% on production costs, enabling us to compete better,” Heng said.

Since then, the company has seen 10% to 15% growth in revenue and net profit annually.

Teoh attributed the success of Ee-Lian in Malaysia to its strategy of pursuing exclusive sales with major hypermarket chains. Workers at the warehouse of the Ee-Lian Enterprise’s plant in Bukit Minyak getting ready to ship out the products.

“Three years ago, we approached Japan-based Aeon Group for them to source its plastic home products from us, which took a lot of convincing and persuasion.

“An audit team from Japan came over to check on our production plant in Bukit Minyak for two days and were finally assured that Ee-Lian had the range of quality products to support their plastic home products division.

“Thus, whenever AEON sets up an outlet in Malaysia or in the Asean region, you can also see our products under the Elianware and Eplas brand names in their home products departments,” he said.

According to Teoh, sales to major supermarkets and hypermarkets in the country contribute about 40% of the company’s annual revenue, which stood at about RM135mil last year.

Teoh said Ee-Lian also designed its display counters at Aeon hypermarkets and supermarkets to ensure the ambience blended well with the unique colours of its products.

“Major hypermarkets prefer sourcing home products from a single supplier because they can have better control of the quality of products. It also saves them the trouble of sourcing from multiple suppliers,” he said. 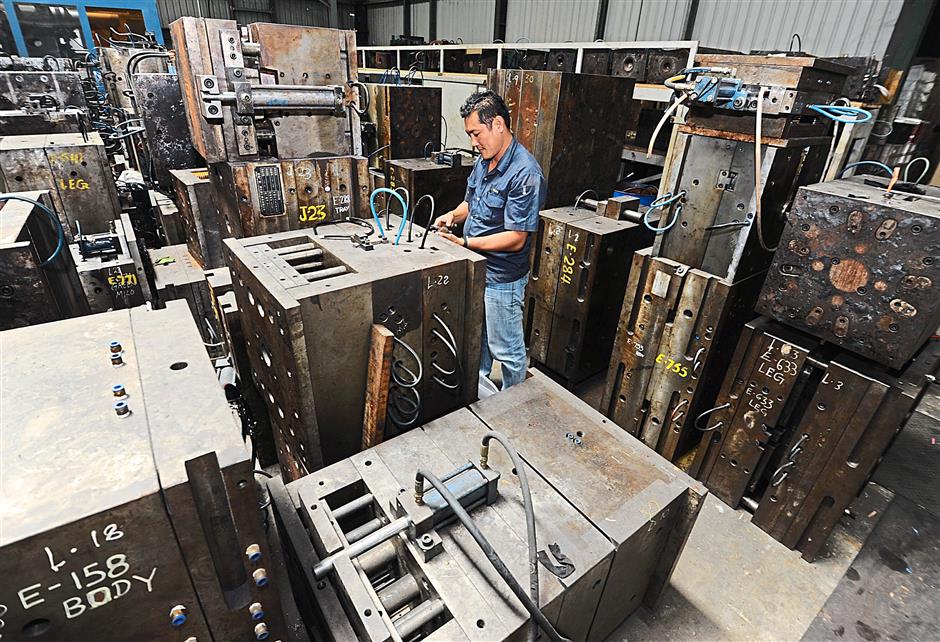 A worker checking the moulding to make plastic houseware and kitchenware at the production line of the plant in Bukit Minyak yesterday.

“We supply to about 800 retailers, wholesalers, hypermarkets, and supermarkets in the country,” he said.

Teoh hopes to expand its overseas segment in the coming year, which currently contributes about 10% to its revenue.

The company is eyeing the European, Thailand and Indonesia markets next year.

“Presently, we are very strong in Vietnam, Cambodia, Myannmar and the Philippines, but not in Thailand and Indonesia, where we plan to go next.

“Outside of the Asean region, we currently export to the Middle East, South Africa, and New Zealand. The European market is in our business expansion plan for 2015,” he said.

Teoh said to drive its growth overseas, the company would be applying the same business strategy which had proven to be successful in driving its growth in Malaysia for the past three years. Teoh is projecting revenue of RM150mil for this year and 10% to 15% growth in net profit.

Next year, Ee-Lian plans to introduce its high-end range of house-ware products under the Apple Lemon brand.

“The plan is to set up concept stores to sell the Apple Lemon products directly to consumers. We want to establish 50 concept stores in shopping malls around the country over the next five years,” Teoh said.

The company has allocated RM5mil to start production of the Apple Lemon houseware range.

To date, Ee-Lian has spent more than RM30mil to produce more than 1,000 different type of house-wares.

According to him, the strategic use of colours for its products plays a very important role in contributing to the success of its sales.

“More than 10 years ago, we used whatever colours we felt was right for a product. We then realised this was a wrong strategy.

“There has to be uniformity in colouring, so that when the products are displayed, they can better capture the attention of shoppers,” he said.

“But we do introduce new colours for our products during Chinese New Year or Hari Raya to complement the colourful decorations of hypermarkets and supermarkets for that particular period,” he added.

The company is already looking at expansion plans to support its growing operations.

“Our plant in Bukit Minyak, located on a 8.5acre site, is currently fully utilised. We are in the process of acquiring another 7.5 acres of land in the same area for expansion. At least RM20mil will be spent for the expansion,” he said.

Heng added that Ee-Lian has plans to go for a public listing in one to two years.