THE history of Oktoberfest began with the marriage of Bavarian Crown Prince Louis, who was later known as King Louis I of Bavaria, to Princess Therese von Sachsen-Hildburghausen in 1810.

For the royal wedding, the citizens of Munich were invited to attend the festivities which was held on the fields in front of the city gates.

According to the History Channel’s Origins of Oktoberfest, the fields were named Theresienwiese, which means ‘Therese’s fields’, in honour of the crown princess.

Years later, the festivities became the annual Oktoberfest, which begins in late September and lasts until the first Sunday in October.

Alcohol consumption is said to be an important part of the modern festival in Germany.

In Malaysia, many watering holes have organised their own version of the Oktoberfest and celebrate it through the month.

To make your outings with friends during this boozy month more fun and exciting, Metro Online Broadcast suggests 10 drinking games for groups of any size. This game is mostly depending on luck. All you need for this two-player game is a deck of cards and drinks. Your opponent will be in charge of drawing the cards. Once the first card is drawn, you have to guess if the following card is higher or lower than the card drawn. If your guess is right, you keep going till your guess is wrong. Then, you drink to the number of cards that were drawn in your turn. If you are wrong, you take a drink and your opponent takes his turn. Just like a horse race, the aim of the game is to finish before your opponents. This game requires a deck of cards and four players. Before playing the game, each player is required to place drink bets. For example, you can place a bet of four sips of your drink and if you win, you will either choose a player to take these sips or divide them between your opponents.

Place four cards of different suits in a horizontal line and seven undrawn cards should be placed vertically on the right, with the first undrawn card placed after the row of cards placed horizontally.

A player is in charge of drawing cards from the deck. When a card is drawn, the suit it carries will bring the card with the similar suit, ahead of the others. Once all four cards pass an undrawn card placed on the right, the card is drawn to reveal the suit that has to take a step back. This game is suitable for big groups and only requires drinks for each player, an empty glass and a deck of cards. Cards must be placed around the empty glass. Each card in the deck represents an action that has to be completed by every player.

For example, a rule for the King card is for a player to pour some drink into the empty glass while the Jack card means that players get to create a new rule, like the player who says “drink” has to consume their drinks. Check online sites for rules of the game. This is a simple game but one that will surely expose some embarrassing secrets. To play, players sit in a circle with drinks in hand. Each player takes turn saying the things they’ve never done and players that have done the deed, have to drink up.

Sure, some will say that players can lie to avoid embarrassing themselves or drinking but to play the game, it’s best you try to be honest. Who knows, you may learn things about your friends you never knew before. The seven game is really all about the number seven and multiples of seven. To play this game, ensure that you have memorised your seven times table. You can play this game with as many friends as you like. Start by counting from number one. On every number with a seven or is a multiple of seven, the player has to clap. Clapping then reverses the rotation of the game. If a player shouts out a number with a seven or a multiple of seven, he has to drink. It usually gets tricky when you reach number 27 and 28.

Like a mini marathon, flip cup can be played with a small or big group of friends. Two teams have to be formed for this game. To play, arrange plastic cups filled with drinks in two horizontal lines, each team with their own row of cups. Each member of the team will then have to stand in front of a plastic cup. At the count of three, the first two members of the opposing team consume their drink and flip their plastic cup. The next player can only take his turn once the cup has flipped upside down on the table. The first team that has all cups flipped upside down wins. What sounds like a game of ping pong with beer is actually not even close to a game of ping pong. The aim of the game is to aim a ping pong ball into your opponent’s cup of beer. This game requires two small or large teams and plastic cups half-filled with drinks to be placed in a shape of a triangle on opposite sides of a table.

The game starts with the first two players taking their turn. One starts by taking a shot at his opponent’s cup. If the ping pong ball falls into a cup, the opponent then has to consume the drink and let’s another player from his team take his turn. Once done, the players take another shot. If the player misses, his opponent then takes his turn. The winner of the game is the team that manages to empty all their opponents’ drinks. This game is best reserved for thirsty people. To play this game, you need six plastic cups, drinks and a single dice. Cups have to be placed in a row, with cups one, three and five filled with drinks.

To play, the first player rolls the dice. If it lands on either one, three or five, the player has to consume the drink and roll the dice again. This repeats till he rolls a number of an unfilled cup.

If the dice lands on a number of an unfilled cup, the player then has to fill up the cup with a drink and another player then takes his turn. I’m not quite sure the aim of the game, but you’ll surely find thirst quenched after a couple of rounds. 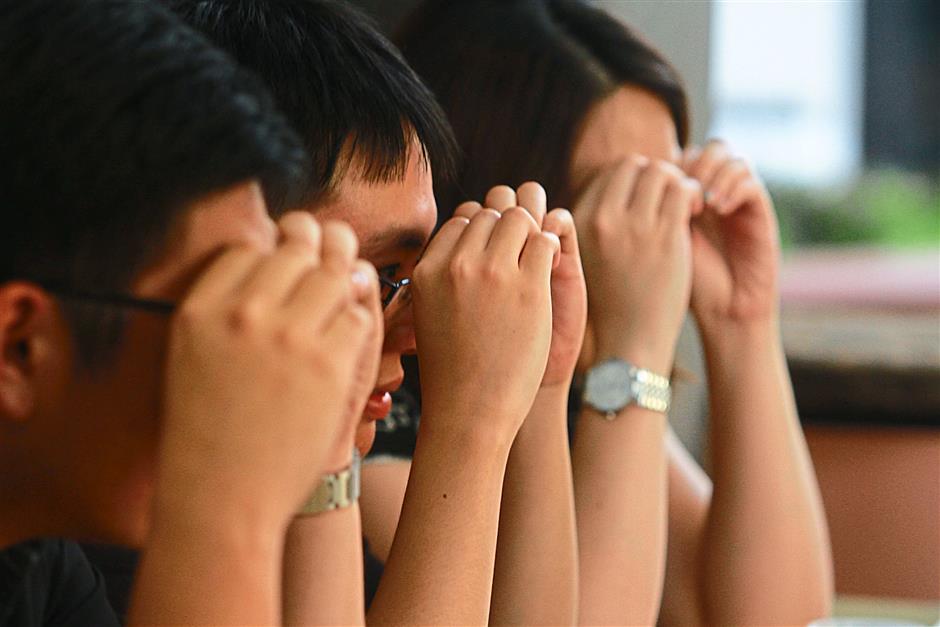 For those who aren’t afraid of looking silly, especially in the eyes of the public, you may want to try this game. This game requires drinks, your two hands and some weird noises. You can play this with a small or big group of friends.

Players must sit in a circle and start the game by saying “Beer goggles up!” which means you must shape a pair of goggles using your fingers. Basically, you look like you have all five fingers shaping an “O” and place them around your eyes to represent goggles. The first player starts by either extending the right or left hand out and saying “Boop”. A right “boop” means the person on the player’s right must take action by extending left or right.

Extending his or her hands out twice and saying “boop, boop” means he or she chooses to skip a person. The player next to the person skipped will then have to take action. Any player who makes a mistake will be punished by taking a sip or more of their drink. There is really no aim to this game, it’s just a silly game for all to enjoy. Just like the seven game, players for this game must know their multiples of five. You can play this with as many players as possible. To play this, extend on clenched fist around the circle of players. You can also choose to use both hands but remember to count how many players are playing so that you know what multiple of five you can shout out.

The game starts with the first player shouting a multiple of five and choosing to either unclench his fist or clench it to form a zero or five. Other players can also choose to clench or leave their fist clenched. If the number of fists unclenched is the same as the number the player has shouted, his opponent who takes his turn after him must drink before he can take his turn. Another way of playing this game is that everytime you have guessed right, you step out of the game and let the rest play.

Now that you’ve learned a few drinking games, bottoms up for Oktoberfest!

MOB encourages readers to always drink responsibly. Do not take the wheel if you are under the influence of alcohol.