The railway track leading into the mines at the Sungei Lembing Tin Mines.

KUANTAN: The recent holidays saw scores of people dropping by the former tin mining town of Sungei Lembing near here to visit part of the refurbished Sungei Lembing Tin Mines.

Students and families made up the majority, taking the opportunity of the week-long break to organise an educational field trip and day outing.

The sudden surge in crowd resulted in a bottleneck, causing the staff to work harder in ensuring all visitors got their money’s worth.

Ng said other attractions include a museum, hanging bridges, a crystal house, the Rainbow Waterfall and Panorama Hill.

He said Sungei Lembing reputedly had the deepest and longest tin mines tunnel in the world. 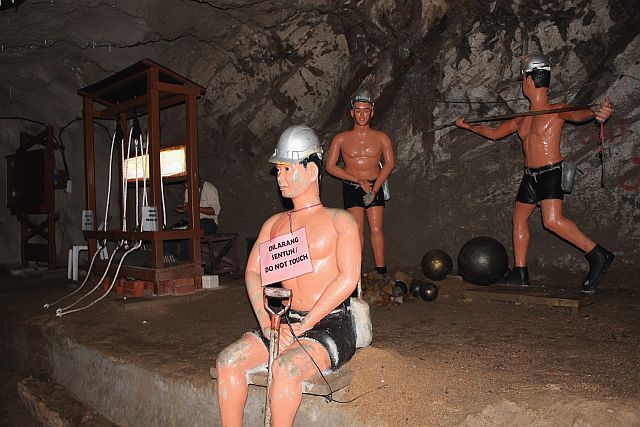 Some of the statues of miners and equipment for the on display at the Sungei Lembing Tin Mines.

“In its glory days, the town was dubbed the El Dorado of the East as it was here that a special settlement for British officers was located around the Kenau River Valley.

“Records showed that big scale mining started in 1905 and at its height, more than 15,000 people were employed to work in the mines,” he said.

Ng said after the tin prices collapsed in the world market, the site was officially closed in 1986 before being handed back to the Pahang government.

He said to further boost tourism in Kuantan and Sungei Lembing, parts of the mine were restored for an underground tour in 2012.

“The local authorities should be commended for its efforts in preserving the tin mines in its most natural and original settings,” he said, adding that visitors had the chance to re-live the glorious era of Sungei Lembing.

The journey into the mines start with a unique “minecraft” ride, followed by a tour on foot.

Since the mine is located beneath a tropical rainforest, visitors will be amazed with the cooling surroundings underground and various tunnel heights, ranging from 12 feet to 200 feet.

In addition, visitors could view some of the equipments used during mining works such as a drilling machine, trams, railway track, safety helmets, interactive exhibits, information boards and statues of miners.

Due to upgrading works in progress, some areas had to be closed to the public.

According to latest statistics obtained from its website, more than 32,000 people visited the mines for the first six months of last year.

Operation hours of the mines are from 9am to 6pm daily.