Once a gangster’s paradise

ONE of the busiest streets in Malacca, Jalan Bunga Raya, is a far cry from its old image of being a perilous place in town.

Between the 1940s and the early 1970s the road was notorious for its gangs, especially around the once-famous City Park, the area around the town’s cluster of movie theatres and the nearby Bunga Raya Pantai village which borders the Malacca River.

The gangster menace was first highlighted in a local newspaper in 1946 by an exasperated local, identified only as ‘G-Man’.

He wrote that what was once a sleepy hollow had become a place of refuge for wanted gangsters from Singapore who lived in grand style in one hotel or another.

Citing the extent of the problem caused by the then powerful “Sin Kongsi” (new gang), he wrote that members of the powerful triad thrived in town and that the gang “fears nobody but is feared by everybody, including detectives”.

Just before the publication of the letter, one cop had been shot dead by members of the gang, which collected protection money from businesses in addition to committing robberies, thefts and running brothels.

“This gang infests the park, cinemas, cafes and dance halls every night. Whenever a stranger happens to jostle against a member of the gang, woe betides him.

“I could rattle off a dozen more facts or so but what is the use. The powers that be cannot be so sleepy as not to be aware of what is going on,” he wrote.

A year later, another detective, Tay Ah Ming and his wife were murdered in cold blood by six gangsters along the road, opposite City Park.

He was in a trishaw with his wife and five-year-old son when they were confronted and shot at. The boy was injured but survived. 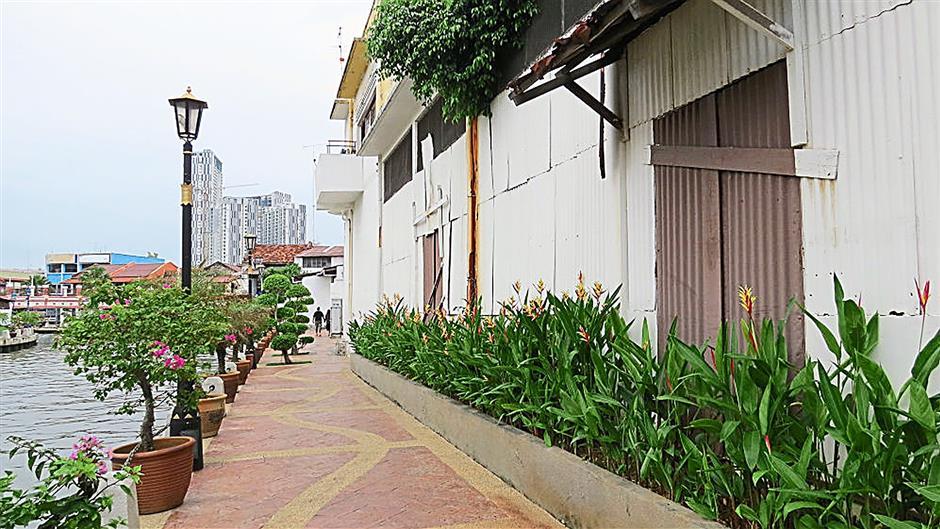 Two off-duty police inspectors, Mubarak Ahmad and Bacha, both unarmed, heroically confronted the gangsters, forcing five of them to flee.

Despite being slashed, Mubarak held on to one of the gangsters, later identified as Ong Kim Toon with the help of Bacha.

Ong was later found guilty of murder and was hanged, but the five others were not caught.

Throughout the next three decades, hoodlums remained a constant threat in Bunga Raya. My old schoolmate Vincent Tay, who grew up in Bunga Raya Pantai, recalled that during the 70’s there were two active triads in the neighbourhood.

“Goh Sek (Five Colours in Hokkien) and It Tiam Ang (One Red Dot) controlled the area outside while the gang that was powerful where the people lived called Tuah chu lai (place of the big house) was the 18 Immortals gang known locally as Chap Puek Kiah.

“Fights were very common then. People were even scared of the wives of the gangsters who passed their time gambling, usually by playing mah-jong, pakau and chekki (a kind of card game), “said Tay.

He said when he was growing up, the most fearsome gangster was one “Ah Chuan” but did not know which triad he belonged to.

But amidst the road, the river and the towers, a few old houses dating back to the era of the gangsters still remain, including those of two Malacca Portuguese families which settled down there along with a handful of the original Chinese households.

Frederick Blankanett, 68, said his family and the Sta Maria family next door were the only non-Chinese living in the neighbourhood.

He lives with his fellow bachelor brothers, Stanley, Micheal and Bert while the other occupants of the house are his married brother George and his wife. 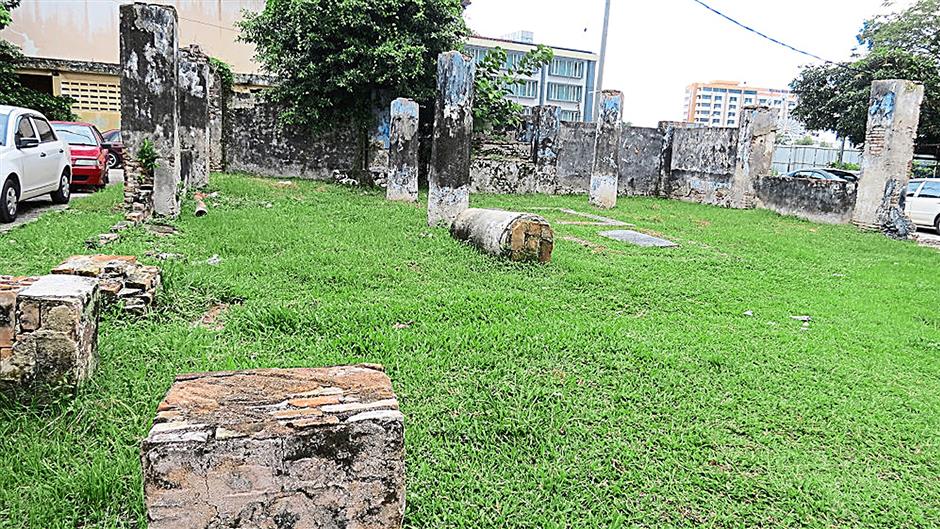 Smack in the middle of the ruins of the St Lawrence Chapel is an old grave of a Portuguese noble.

“We don’t know how long we will be here. We have been asked to leave but the authorities are still deciding on compensation,” he said.

Bunga Raya Pantai still has its hidden attractions, beginning with the ruins of the St Lawrence Chapel or more accurately the “Capela de Ermida de Rosario” or the Rosary Chapel , which replaced the original Saint Lorenzo Chapel erected in the early 1600s.

The significance and use of the chapel declined after the St Peter’s Church, the oldest functioning Catholic church in the country, was built a few hundred metres away in 1710.

Smack in the midst of the ruins is an intriguing old grave of one Emerinci de Souza, reportedly a Portuguese noble.

A boardwalk by the river, occasionally patrolled by the leader of the last remaining pack of monkeys living in the mangrove trees, leads to two old Chinese shrines – the Sea Dragon Temple where local fishermen used to pray before setting off to sea and the Three Treasures Hall, a shrine sought after by childless couples seeking to be blessed with children.

The Jalan Bunga Raya that most locals and tourists are familiar with begins at the left turn from the Jalan Kampung Pantai’s Tan Kim Seng Bridge.

The first colourful building on the road is the Discovery Cafe where one can run to all kinds of interesting regulars, including Kota Melaka MP Sim Tong Him. The Sea Dragon Temple is where local fishermen used to pray for good  catches before setting off in their boats.

The cafe is also a much sought after traveller’s lodge, run by the affable Teng Kim Sia, one of the city’s pioneers in the backpacker accommodation business.

As hinted by its name, there are lots of things to discover, especially Teng’s impressive collection of antiques and curios. Most of the tables in the cafe are recycled tops of old sewing machines.

Many of the buildings in the streets can be traced back to the 1920s and 30s. If the front of the shops are typical, the backs of the premises, linked by a landscaped walkway, offer beautiful views of the river.

A good place to know more about the architecture here and other old roads is the Malacca Conservation Centre located at No 45, Jalan Bunga Raya.

The centre, which focuses on the conservation of historical buildings and artefacts, is managed by the Malacca Museum Corporation with the support of the state World Heritage Office, the Malacca Historical City Council and two local colleges.

In addition to its many goldsmith shops, textile dealers, stationery shops and those selling electrical goods, Jalan Bunga Raya is also a place for famous Malacca food, dating back to the 40’s when there was apparently a famous ‘people’s restaurant’ selling a complete meal for 30 cents.

According to the old folk, the eatery was at the location of today’s ‘Medan Makan Boon Leong Bunga Raya’ an alley sandwiched between two buildings on the street.

Commonly known to locals as “Hungry Lane”, the place is famous for two stalls selling char siew rice during the day and for its three generation-old or chien (oyster omelette) stall at night.

It is usual for customers of the stall to wait for up to half an hour before getting their share of or chien, a scrumptious combination of oysters, flour and eggs, dished out.

The city’s famous popiah stall is also here, next to the Madam Kings department store. It’s another place where customers have to wait to buy.

When I was growing up, two places were a must when going to Bunga Raya – the Tai Chong Hygienic Ice Cafe, the best spot for pat poh (mixed ice kacang with eight ingredients) and the Min Chong stall directly opposite which served a delectable version of rojak with cendol to wash it down.

As I found out last week, both these places are still as popular as ever.