Runners with their headlights rearing to go before the start of the race during the Energizer Night Race 2014.

THE usual glow from cars bustling in the city was replaced by a different kind of headlamp as city folks blazed through landmark locations within the city during the 2014 Energizer Night Race.

Donning their headgear at the flag-off point at Dataran Merdeka, runners later lit up the streets of the city as the route brought them past landmarks such as the National Mosque, National Hockey Stadium, Dayabumi Complex and the KL Bird Park.

The Night Race was revived after a year’s hiatus and moved from the previous venue of the Sepang International Circuit to the city centre, with 15,000 runners gathering at the historical Dataran Merdeka for the largest night race in Malaysia.

Many arrived before sunset to bask in the atmosphere and take part in side events such as wall climbing while a large number of participants also did their part in going green by getting to the race site via LRT. 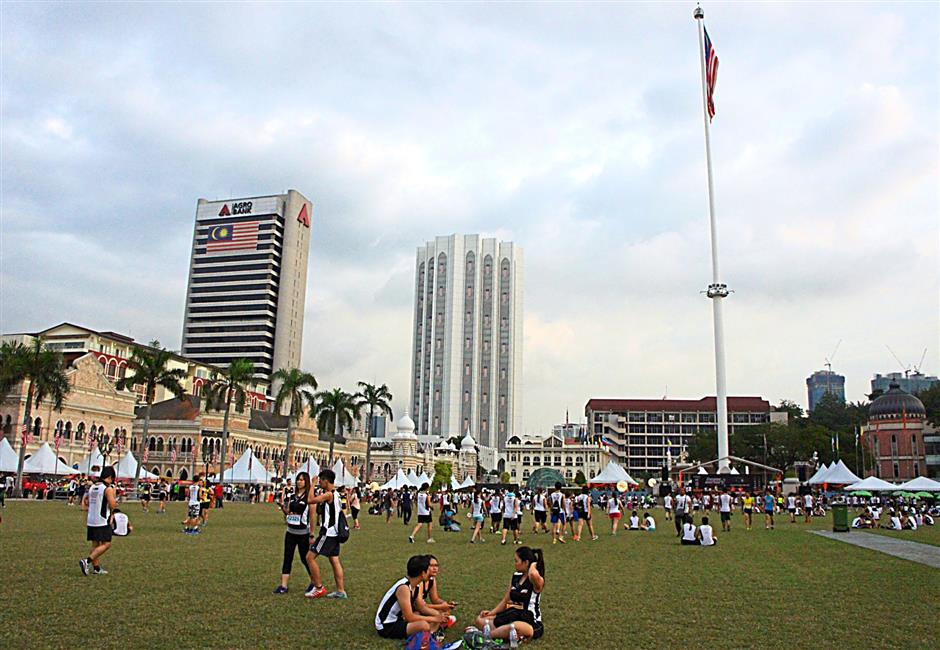 
“As the station is so close to the venue, it was only logical to take the train and avoid traffic as well as bypass road closures.” said Yeo Ming Jin.

Some participants came with their families and friends.

Robert William Holbrook II and Makiko Mizutani came with their toddler, Hana in a stroller for the 5km fun run.

The couple said they had wanted to introduce the idea of outdoor activities to their baby since the day she was born.

The race also hosted the “Light Up The Dark” initiative by partnering with Epic Homes, which will see new houses built for the orang asli of peninsular Malaysia.

Energizer Malaysia and Singapore managing director Mike Foong said the amount raised for the initiative was close to RM 200,000 and gained further momentum with the awareness and contributions made before and during the race.

Accompanied by upbeat music and fireworks, Kuala Lumpur mayor Datuk Seri Ahmad Phesal Talib and Foong flagged off the 15,000 runners, unleashing a torrent of lights on the streets.

Along the route, runners were spurred on by drummers to keep the pace up and the path was lit by LED lights and laser shows.

Malaysia steeplechase runner Karthik Jayaraman, who finished the race in 56 minutes and 11 seconds, came home second and was delighted with the experience.

Although his personal best for 15km is under 49 minutes, the hilly terrain along the 15km route was a factor for his slower time but the 25-year-old national runner enjoyed his time while taking home RM1,200 cash and RM3,600 worth of products and vouchers.

“I was second from the very beginning of the race, (behind eventual winner Michael Xenos), which caught me by surprise. The crowd was just amazing and there were groups of drummers cheering us on halfway through which was great fun. I am looking forward to taking part in the next edition.” Karthik said.

Xenos from Greece, the winner of the 15km men’s open category, crossed the line in 53 minutes 29 seconds while Jackline Nzivo from Kenya, came first in the 15km women’s open category, finishing her run in 1 hour and 38 seconds. The champions each won RM1,500 cash and RM7,300 in products and vouchers for their victory.

Speaking after the flag-off, Ahmad Phesal said partnerships to make the city of Kuala Lumpur more vibrant were encouraged and he hoped such activities would continue on.

“We hope that we can work together for next year’s run, maybe even increasing the number of participants as there were many more who wanted to join but couldn’t make it,” he said.

For progress and updates on the building of houses for the orang asli (scheduled to be completed by year end), visit the Energizer Malaysia official website at energizer.com.my/nightrace/ or its Facebook page at www.facebook.com/EnergizerMY