THE A&W restaurant in Lorong Sultan, Petaling Jaya, has been packed with customers as fans, young and old, flock there for their favourite rootbeer and coney dog since news of its impending closure spread like wildfire on social media.

However, the iconic fast-food joint is only shutting down temporarily at the end of the year and will return in 2018 with a fresh and improved look.

This is part of a turnaround plan by KUB Group — the franchise owners of A&W in Malaysia and Thailand — that started about three years ago.

KUB Malaysia Berhad Group managing director Datuk Wan Mohd Nor Wan Ahmad said the group was planning to develop the land with two office towers called the KUB Towers and relocate the A&W outlet while waiting for the project’s completion in 2018.

“The new and improved outlet with modern concept will be located on the ground floor of the building,” he said.

He, however, would not reveal where the restaurant would relocate to during the construction period, except to say “nearby.” From the good ol’ days: The A&W res taurant in Section 52, Petaling Jaya, built in the 1960s, is known for its rootbeer, coney dog and dining in the car like in the movies. — filepic


A&W Malaysia has been going through a major revamp with KUB closing down 27 outlets throughout the country since 2011.

In the east coast, A&W is no longer found in Kota Baru town, Kota Baru Mall and in KB Tesco.

Up north, the fast-food chain has also closed its outlets in Kulim and Tesco Sungai Petani in Kedah while in Perak, those closed are in Taiping Central and Station 18 in Ipoh.

Other outlets that have ceased operations include those in Gurney Plaza (Penang), OBR Nilai (Negri Sembilan), Permas Jaya Mall (Johor) and Alamanda (Putrajaya).

It is understood that most outlets that have been closed are located within malls while the stand alone restaurants will continue operations.

The latter, including those located in Subang Jaya (next to 3K Sports Complex) and Seremban (Negri Sembilan), are among a total of 20 A&W restaurants still open.

The group is also in talks with a prospective buyer for its Thailand venture and the deal is expected to be completed in two months.

A&W Malaysia had been recording losses since 2001 but with a sound turnaround plan that started back in 2011, the chain registered a profit last year. 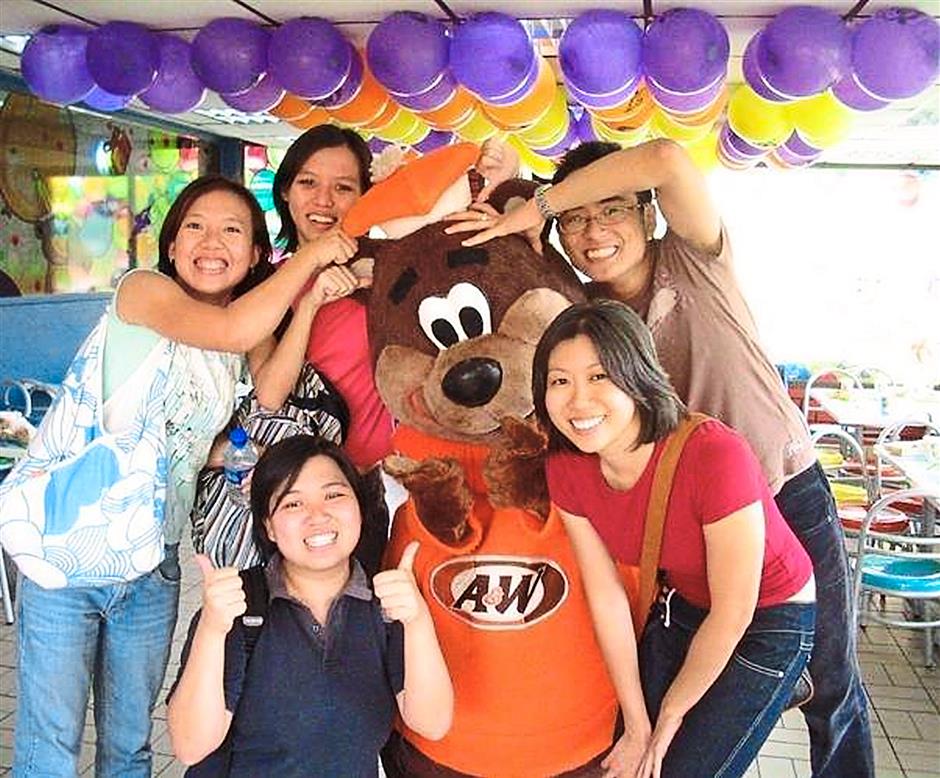 Beary fun: Low (left) with her university friends during one of their visits to the fast-food joint where they chased after the mascot.


KUB also has about RM144mil to spend to elevate the American fast-food chain’s profile together with other business ventures.

“The revenue from the operations of A&W’s existing outlets is sufficient to finance the capital expenditure of its new outlets.

“KUB is expected to open four new outlets per year with an estimated cost of RM600,000 for each outlet,” said Wan Nor.

“With regards to the cash pile of RM144mil, it will be used to acquire plantation land, as working capital for construction projects and for the KUB tower,” he added.

As competition heats up in the fast-food industry, A&W Malaysia is going to pick its battles and target a niche market.

“We are going to open more stand-alone outlets in strategic locations such as at petrol stations. However, we have no plans to open an outlet at an office building (other than KUB Towers).

“We will open a new outlet at PLUS North-South Highway after Hari Raya,” Wan Nor disclosed.

The 24-hour restaurant in Section 52, across the road from Amcorp Mall and the Taman Jaya LRT station, first opened five decades ago, and has a drive-in service where customers can park their cars at the designated bays and be served at their car.

Upon hearing the news of the closure, the general feeling among residents in the surrounding areas was sadness and nostalgia.

Photographer and artist Soraya Yusof Talismail said A&W had always been known as a family restaurant and was the venue for many such gatherings.

“My parents used to take me and when I started a family of my own, I went there with them too.”

Journalist Ann Marie Chandy remembered her mother’s best friend, whom she called G Aunty, would drive her (about five years old then) and her sister Susan to the A&W Drive-in.

“We would thoroughly enjoy the whole experience of driving to a fast-food joint that served rootbeer float and hotdogs on a car-hop serving tray that hung onto the car door. It was one of my nicest holiday experiences, which I always looked forward to. Thank you Aunty G and A&W!”

Copywriter Anas Adlan Amir said she and her family used to travel down regularly from Penang to Kuala Lumpur during the school holidays, and the A&W restaurant in Petaling Jaya would be one of their destinations every time.

Public relations practitioner Paulin Aro said she used to work at the restaurant in 1986, while waiting for her examination results, and it was her first work experience.

Singers and artistes frequented the place, and Paulin remembers serving singer Noorkumalasari, among others, during her job stint there.

Thomas Yeoh, who had also worked part-time at the restaurant during his college years, said there used to be an ice-cream bar out front.

“The staff who worked in the drive-in section got the most tips!” he said with a chuckle.

As with most other fast-food restaurants, the place was also a popular hangout for dating couples.

Retired teacher Chua Pek Koon, who studied in Universiti Malaya in the 1970s, said it used to be the place for UM students to hang out and go on dates.

“Families also went there for celebrations,” she added.

Former Petaling Jaya city councillor and lawyer Derek Fernandez recalled going to the restaurant regularly with his father as a child and then with friends as a young adult.

“I have a lot of good memories, going there regularly once a month with my dad, and later, driving his car and bringing my dates there and eating in the carpark,” said Fernandez.

He pointed out that the 49-year-old restaurant formed part of the Petaling Jaya landscape heritage.

He expressed doubts on whether KUB Malaysia’s redevelopment plans could go through given the tight traffic access in the area.

StarMetro reporter, Christina Low said that after a long day in class, her university mates and she would head to A&W for a mug of cold rootbeer.

“During one of our many visits we bumped into the mascot, the Great Root Bear (Rooty) himself and we chased him around the restaurant just to have a picture with him,” she added.

Do you have any old photos of your experiences in A&W Seksyen 52? Or perhaps some sweet memories of dining there with family or loved ones at this iconic PJ landmark? If so, we’d like to hear from you at www.mob.com.my