IN THE evenings, the Ramadan bazaar in Bandar Baru Salak Tinggi does brisk business, being one of the largest and busiest bazaars in Sepang.

One unique stall to look out for is Gerai John Kupang, which sells spicy mussels. It is run by business partners Abdul Aziz Baharum and Adie Samsuddin.

The sight of two large woks filled to the brim with steaming hot shellfish dripping with sauce, coupled with the fragrant aroma of herbs and spices, is enough to make one’s mouth water.

“We use a combination of herbs, spices, chilli powder and curry powder for the recipe,” said Adie, adding that they prepared a fresh batch of sauce every five days.

Good mussels are hard to come by, so they transport them from Malacca daily.

“The ones you get at wholesale markets are kept on ice, so they are not fresh,” he said.

This is the first time the pair is setting up stall in Sepang. “We have been selling at bazaars in Kuala Pilah, Negri Sembilan for the past four years,” said Adie.

Abdul Aziz and Adie picked up cooking from chefs they befriended while working in the hotel industry.

“Business has been good so far. We have managed to sell 50kg of mussels per day,” said Abdul Aziz.

Each portion of the spicy kupang costs RM5.

At the other end of the bazaar, many people were seen making a beeline for Citarasa Azri’s drinks stall and its wide selection of thirst quenchers.

One of the bestsellers was the Katira, a popular beverage at Ramadan bazaars which is made from getah anggur, selasih (basil) and kembang semangkuk.

To cater to those on the go, the drinks were nicely packed and sold for RM3.

Owner Hanizul Azri said he had not raised the price since he first started selling at the bazaar 10 years ago.

Hanizul said they sold up to 500 packets of drinks per day.

“We start making the drinks in the morning, all the way until evening when we open at 3pm,” said Hanizul, who is also a pasar malam trader.

Just next to Hanizul’s stall is another stall drawing in the crowd with its kebab skewers.

Cooked fresh off the grill, the lamb and chicken kebabs with vegetables are a healthy and wholesome choice for patrons.

“For the meat to be tender and juicy, the cooking time needs to be about five minutes,” said stall owner and first-time trader Nor Azri Selamat, 38.

Customers did not seem to mind the wait, judging from the long line in front of the stall.

Nor Azri uses his own special recipe incorporating chilli and black pepper. 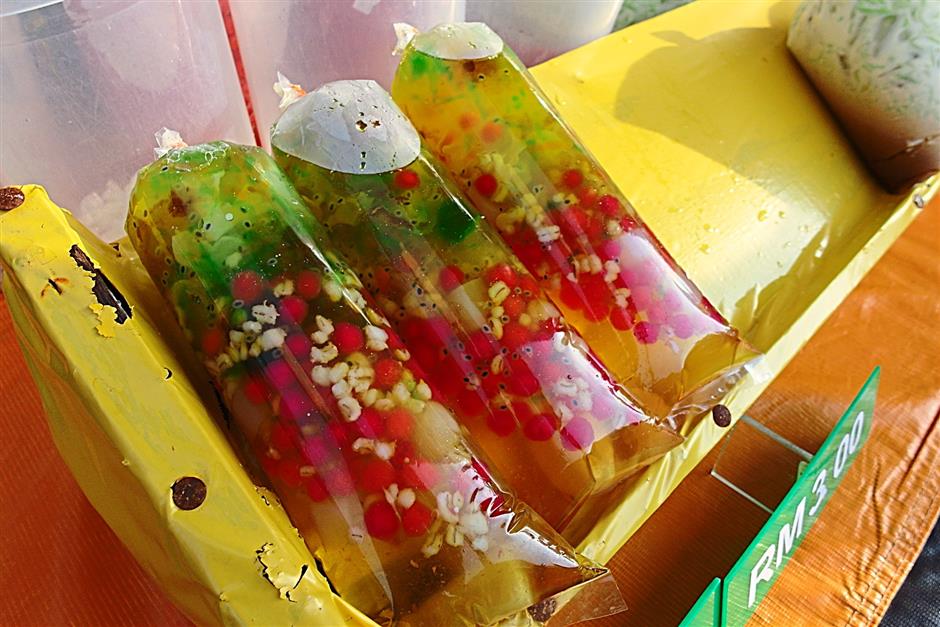 “I learnt the basics from recipe books, before modifying it to suit my customers’ tastes,” said Nor Azri, who helped his family out at other bazaars before deciding to open his own stall this year.

Nor Azri, who is a driver, prepares the ingredients before going off to work in the morning. He sells about 200 sticks a day.